I’m very fond of this piece from an obscure magazine published in Louisville in 1975-76. I believe only two issues were ever produced, and it was founded by Ernest Johnson, David Caudill, and friends. What I find fun about this is that it captured a glimpse of my life long before the bike, and even before I ever started thinking of myself as a writer… so there is essentially no “branding” here. It’s just a story of a 23-year-old geek in an odd setting, doing things that were unusual at the time… with a few quaint notions thrown into the mix. Featured is my homebrew 8008 computer system, which flickered to life in 1974. 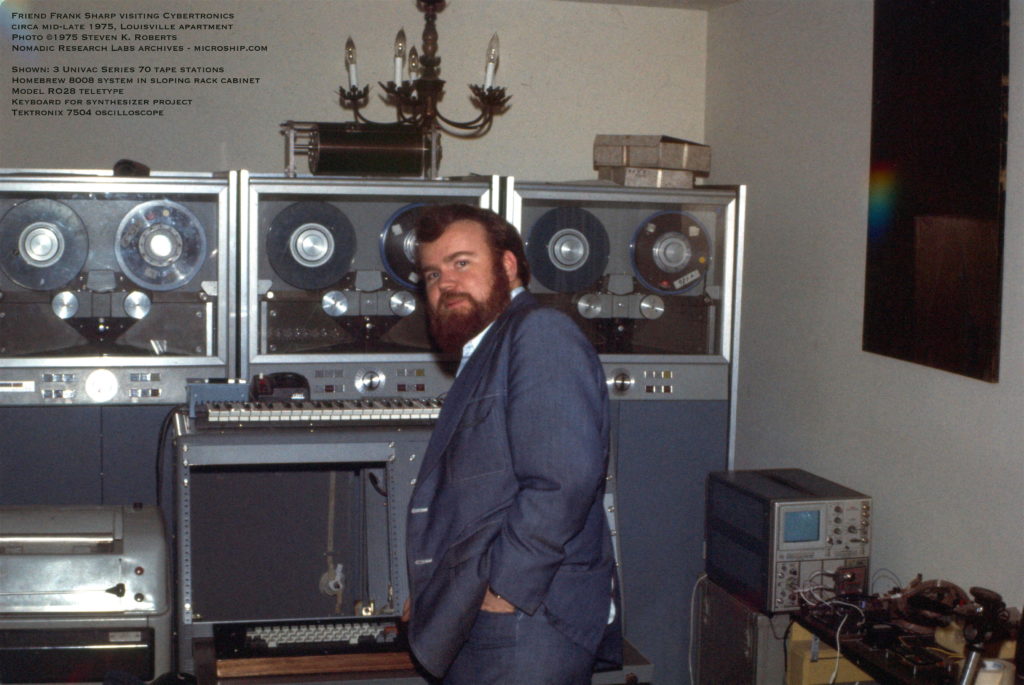 It also has a rare photo (although mirrored for graphic convenience) of the end of my basement apartment living room that contained a trio of Univac Series 70 magnetic tape stations. I bought these for a song when the local telco upgraded, though I never actually got them to do anything useful other than transport tape with their vacuum columns bouncing hypnotically. That was enough. When I moved shortly after this article, it took a tow truck to haul them up the steps… much to the consternation of the neighbors. Remember, this was Kentucky in 1976. 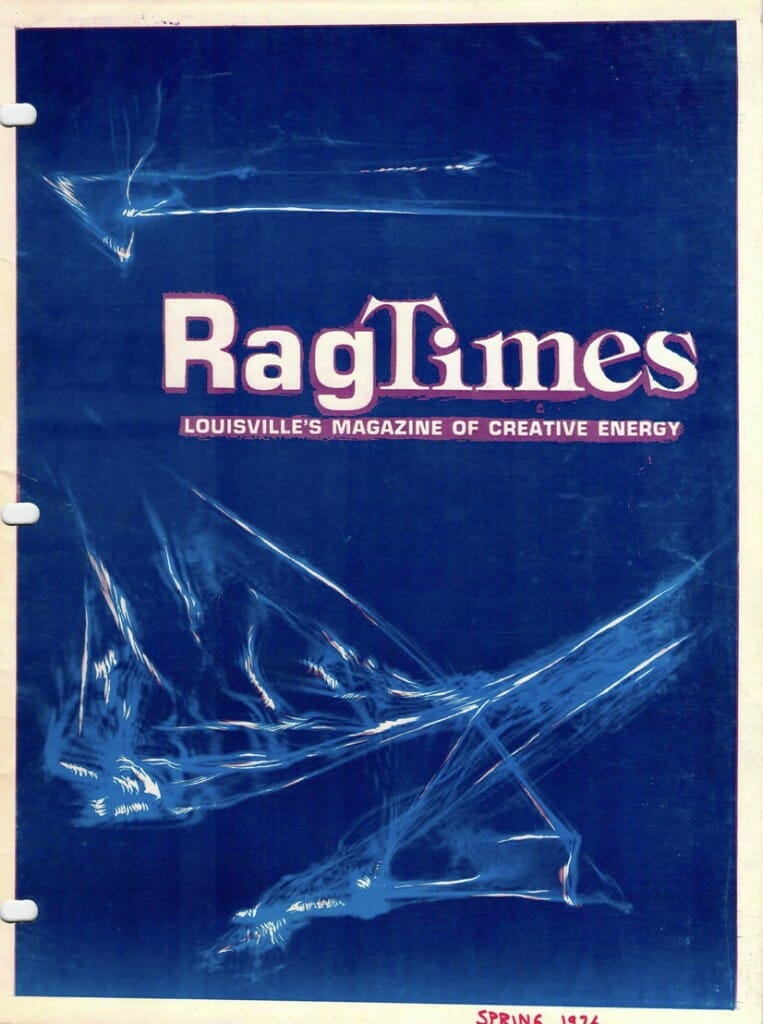 Also of note is the graphics. For the cover, I provided a piece of redneck interferometry that I produced with my Spectra-Physics 155 HeNe laser and a piece of cheap glassware, shooting directly onto the film plane of my SLR without using a lens. Dave Caudill added highlights and the text. But his most delightful contribution to this was the rambling graphic narrative that begins on the first page with the lifting keyboard and carries through the entire piece… a most innovative montage.

Steve Roberts’ roommate is a talented musician, an extremely competent games player, and he even condescends to type out mailing stickers for the thousands of booklets Steve uses in his business.

He can deal poker like a card shark, and is learning to play bridge and gin rummy. In the not-to-distant future, Steve plans to teach him chess. Sturdy accomplishments these, especially considering that Steve’s roommate was born October 31, 1974.

Since that day, “Behemoth,” as Roberts has appropriately named his friend, has grown until he has encompassed half of Steve’s living room with his grey steel light-studded torso. 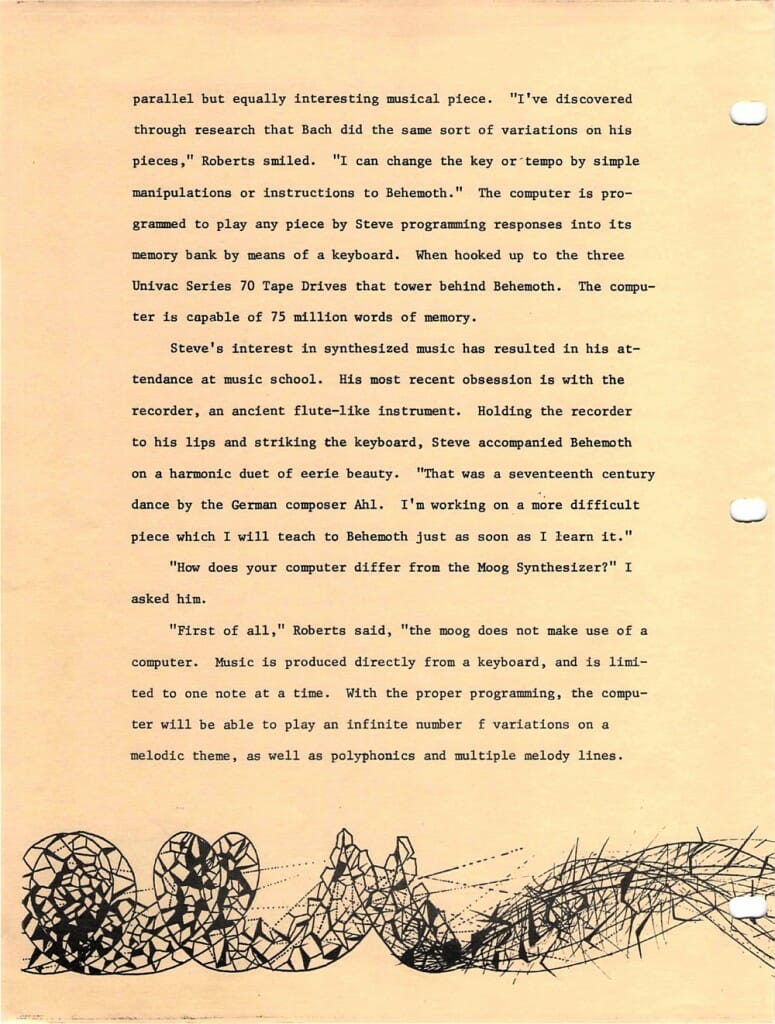 Actually Steve’s relationship with Behemoth is more that of father and son, since Roberts is the sole parent of his computer roommate. I was introduced to both of them at their apartment at Springview Apartments.

I didn’t really meet Ernest at the door dressed like this… but the photo is from the same era.

Steve met me at the door with a firm handshake, a slightly disheveled appearance, and a smile of wry good humor. Inside, I was introduced to Behemoth who crouched coyly in his half of the living room, lights blinking in smooth sequence from his placid countenance. Steve was anxious to show me what Behemoth could do, so hitting several switches with his finger and touching a number on a keyboard, the computer beeped off into Bach’s Brandenburg Concerto at breakneck speed. “Care to hear it upside down?” Steve asked. Hitting switches again caused Behemoth to speed off into a parallel but equally interesting musical piece. “I’ve discovered through research that Bach did the same sort of variations on his pieces,” Roberts smiled. “I can change the key or tempo by simple manipulations or instructions to Behemoth.” The computer is programmed to play any piece by Steve programming responses into its memory bank by means of a keyboard. When hooked up to the three Univac Series 70 Tape Drives that tower behind Behemoth, the computer is capable of 75 million words of memory.

Steve’s interest in synthesized music has resulted in his attendance at music school. His most recent obsession is with the recorder, an ancient flute-like instrument. Holding the recorder to his lips and striking the keyboard, Steve accompanied Behemoth on a harmonic duet of eerie beauty. “That was a seventeenth century dance by the German composer Ahl. I’m working on a more difficult piece which I will teach to Behemoth just as soon as I learn it.”

“How does your computer differ from the Moog Synthesizer?” I asked him. 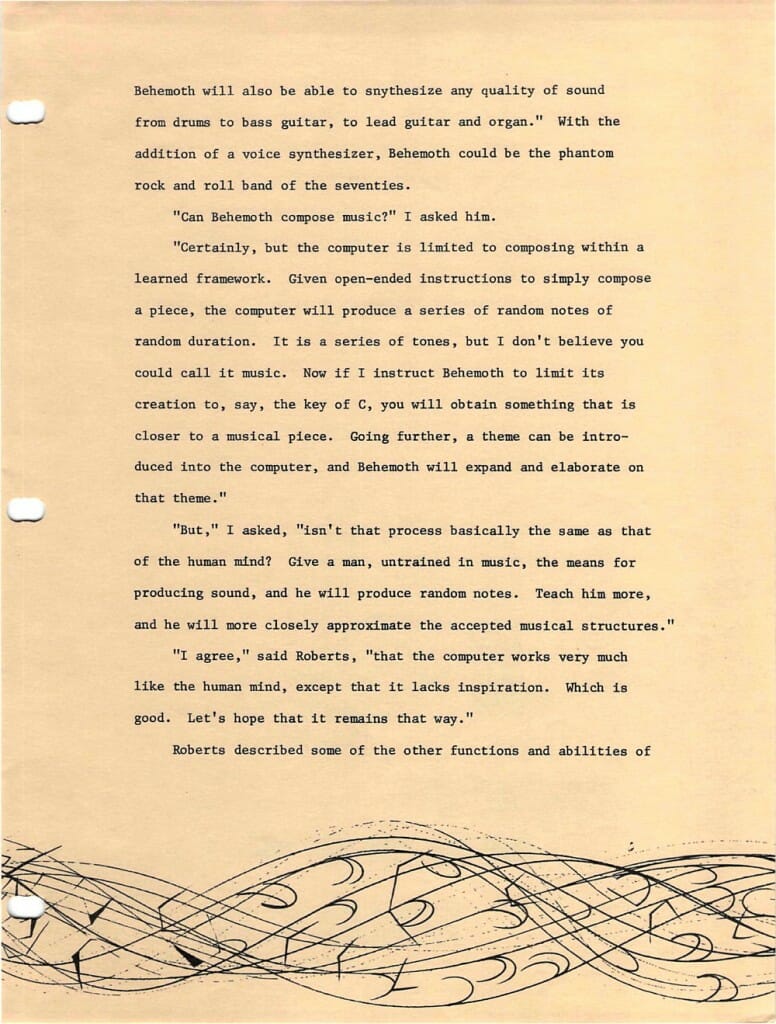 “First of all,” Roberts said, “the Moog does not make use of a computer. Music is produced directly from a keyboard, and is limited to one note at a time. With the proper programming, the computer will be able to play an infinite number of variations on a melodic theme, as well as polyphonies and multiple melody lines. Behemoth will also be able to synthesize any quality of sound from drums to bass guitar, to lead guitar and organ.” With the addition of a voice synthesizer, Behemoth could be the phantom rock and roll band of the seventies.

“Can Behemoth compose music?” I asked him.

“Certainly, but the computer is limited to composing within a learned framework. Given open-ended instructions to simply compose a piece, the computer will produce a series of random notes of random duration. It is a series of tones, but I don’t believe you could call it music. Now if I instruct Behemoth to limit its creation to, say, the key of C, you will obtain something that is closer to a musical piece. Going further, a theme can be introduced into the computer, and Behemoth will expand and elaborate on that theme.”

“But,” I asked, “isn’t that process basically the same as that of the human mind? Give a man, untrained in music, the means for producing sound, and he will produce random notes. Teach him more, and he will more closely approximate the accepted musical structures.”

“I agree,” said Roberts, “that the computer works very much like the human mind, except that it lacks inspiration. Which is good. Let’s hope that it remains that way.” 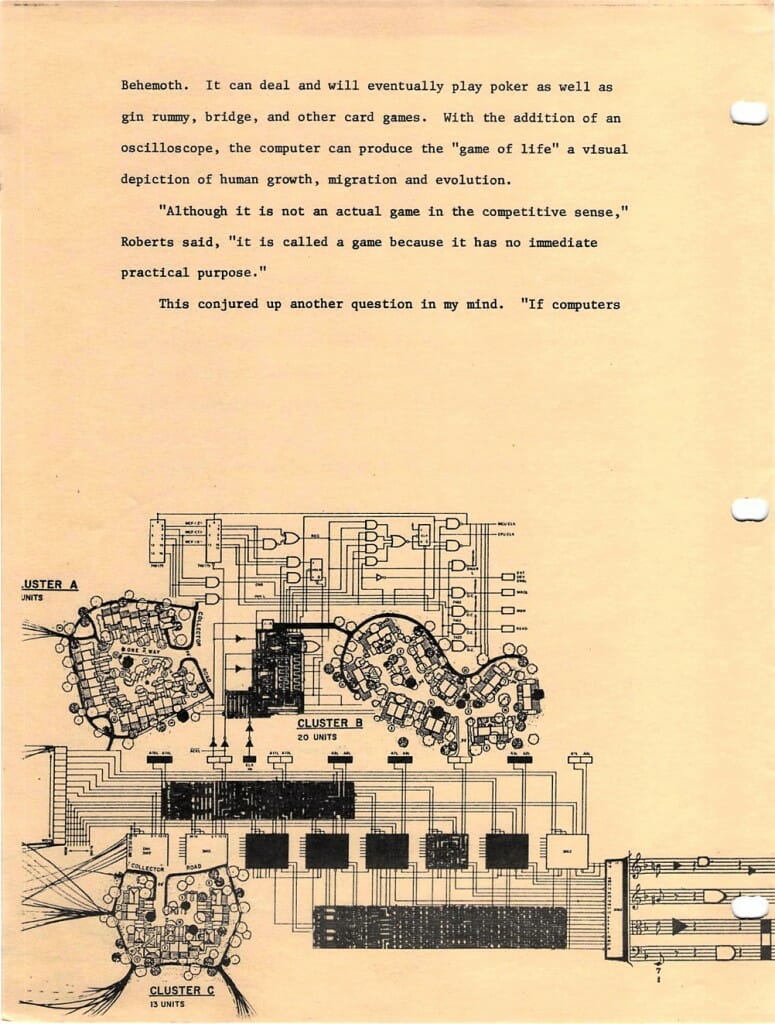 Roberts described some of the other functions and abilities of Behemoth. It can deal and will eventually play poker as well as gin rummy, bridge, and other card games. With the addition of an oscilloscope, the computer can produce the “game of life” a visual depiction of human growth, migration and evolution.

“Although it is not an actual game in the competitive sense,” Roberts said, “it is called a game because it has no immediate practical purpose.”

This conjured up another question in my mind. “If computers can realistically reproduce human situations such as evolution and migration, couldn’t they be used in leadership positions—say urban planning, urban government?”

“Basically, computers can be used for any type of problem solving, and they are presently being used for urban planning. Given variables such as food, weather, available dwelling area, they can predict the outcome of human activity. Given a basic framework of rules and information, a computer can make mathematically correct decisions in regard to the use of area, raw materials, and population.” 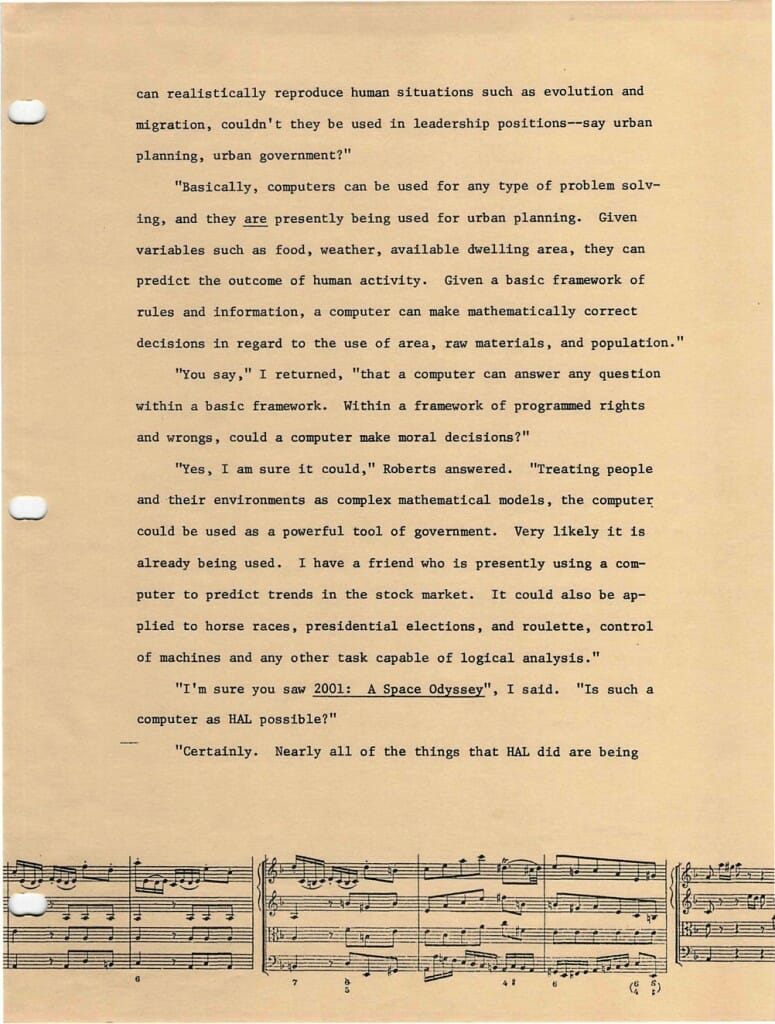 “You say,” I returned, “that a computer can answer any question within a basic framework. Within a framework of programmed rights and wrongs, could a computer make moral decisions?”

“Yes, I am sure it could,” Roberts answered. “Treating people and their environments as complex mathematical models, the computer could be used as a powerful tool of government. Very likely it is already being used. I have a friend who is presently using a computer to predict trends in the stock market. It could also be applied to horse races, presidential elections, and roulette, control of machines and any other task capable of logical analysis.”

“Certainly. Nearly all of the things that HAL did are being done by computers. HAL was simply a network of computers with unique functions. Such a set-up is often called amultiprocessor, the newest of which is called a hypercube. Basically, you have a set of computers that deal with input and output and other specialized operations, and they act as middle-men between you and the main computer, or “brain”, itself consisting of multiple processors to share the load. HAL was a computer that possessed intelligence. In other words, HAL was capable of solving problems, taking the learned information and solving new problems creatively. To HAL, the human presence was simply a problem that needed solving.”

Roberts also showed me two other electric toys at his apartment.

The first was a color television whose works had been replaced with the equivalent of a rudimentary oscilloscope. Wired to his stereo, each channel of music defined a band of light in a different direction. Working together, they produced ovals of rainbow color, as well as squares, diamond shapes, and abstract squiggles in response to the music. He also demonstrated the unique, to say the least, effect of directing a laser beam through a 48¢ crystal glass from Kroger’s. The result was a fantastic array of shapes and forms projected against the wall, formed by crystalline imperfections of the glass. The entire laser unit could be built for less than $100.00, he told me. Behemoth could be built for less than $1,000.00. 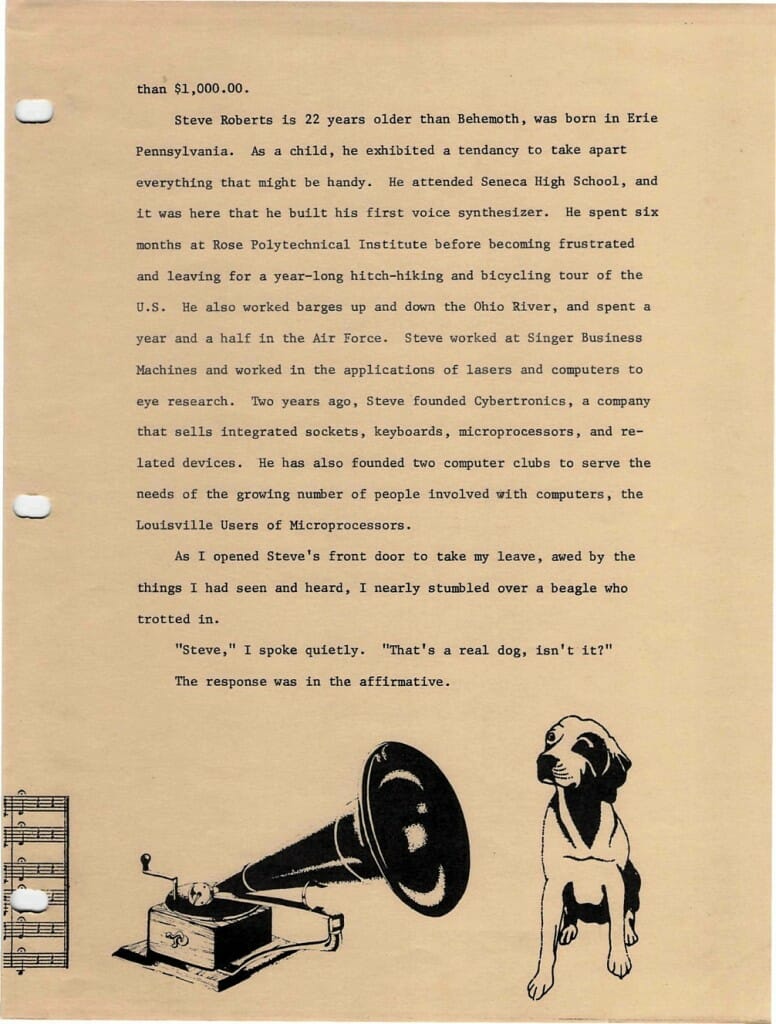 Steve Roberts is 22 years older than Behemoth and was born in Erie, Pennsylvania. As a child, he exhibited a tendency to take apart everything that might be handy. He attended Seneca High School, and it was here that he built his first voice synthesizer. He spent six months at Rose Polytechnic Institute before becoming frustrated and leaving for a year-long hitch-hiking and bicycling tour of the U.S. He also worked barges up and down the Ohio River, and spent a year and a half in the Air Force. Steve worked at Singer Business Machines and worked in the applications of lasers and computers to eye research. Two years ago, Steve founded Cybertronics, a company that sells integrated circuits, keyboards, microprocessors, and related devices. He has also founded a computer club to serve the needs of the growing number of people involved with computers, the Louisville Users of Microprocessors.

As I opened Steve’s front door to take my leave, awed by the things I had seen and heard, I nearly stumbled over a beagle who trotted in.

The response was in the affirmative. 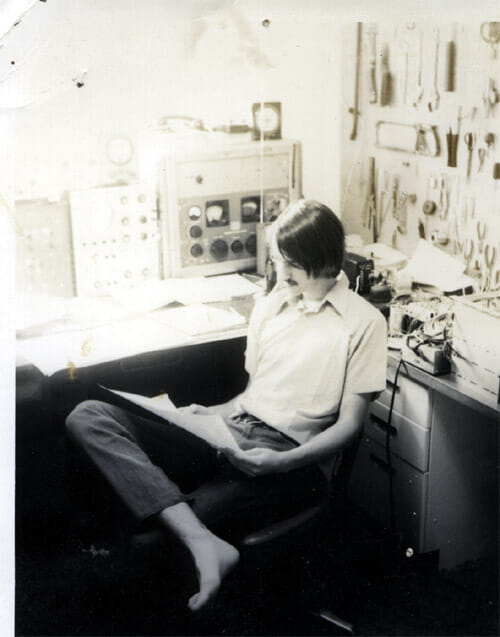 This is me a year or so earlier in one of the apartment bedrooms, working on BEHEMOTH.