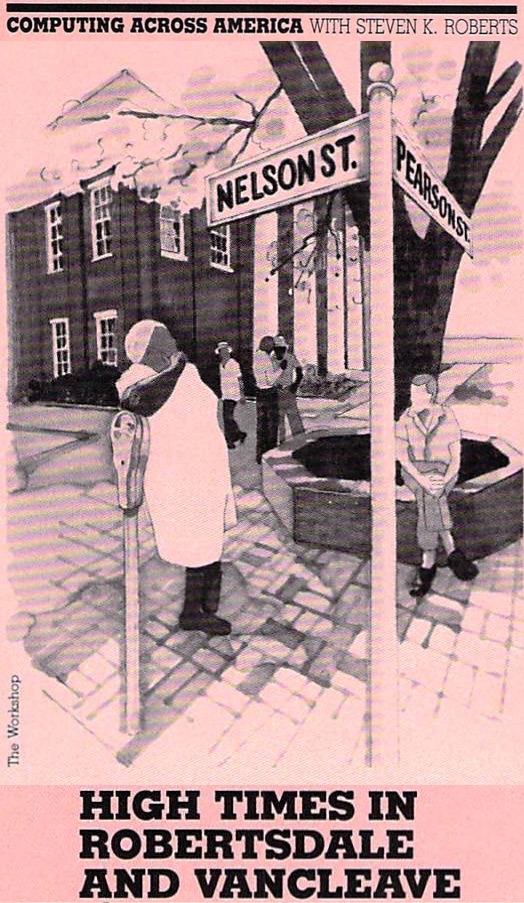 Little cultural snapshots as I pedaled through the Deep South in 1984… artwork above by some nameless staffer at CompuServe, though I was later criticized by them for it.

After four months in Florida, I was almost eager for a new state, for culture shock, for something different. It was becoming embarrassing. I mean, there I was, supposedly a high-tech nomad, languishing happily in the sunshine state, fantasizing about the journey — but not doing it.

Well, that changed abruptly with the crossing of the Alabama line. Within the first hour, a ragged old car passed going the opposite direction, then executed a dusty U-turn and clattered to a stop beside me. Out stepped a lumbering character, who introduced himself with a gap-toothed grin and explained. “Well, listen, I was curious. I ain’t never seen a rig like ‘at, and I got to thinkin’: ‘at might be ‘at dude I heard about on the TV. I’m gonna turn around and go see. Man, you rigged up, aintcha?”

A few miles later, I arrived in Robertsdale. Now this was an event that I had been anticipating eagerly for months, and after photographing the ROBERTSDALE CITY LIMITS sign and the first two street signs. I pedaled into town for a bit of banter.

(Oh — why photograph the street signs? They were Pearson and Nelson streets: the names of my biological parents. Odd enough that they should be juxtaposed as adjacent Alabama streets, but in Robertsdale, of all places?)

Anyway, I arrived in town to send postcards and sample the ambience, and soon fell to talking with the locals…

“What we got here, man? It’s a solar-powered sumpin-or-other!”

“I call this thing a Winnebiko. The solar panel charges up a battery for the lights, radio, security system, horn and other stuff,” I replied.

“Security system! All right! You got an electric energy field around the thing?”

“Actually, if anybody starts messin’ with it, it beeps me with a little pocket pager —”

“Do you have to pedal that thing, man?”

“Why sure! Runs on pizza and beer.”

Another fellow poked at the 7-inch yellow barricade flasher located be hind my seat. “Look like you stole this offa some sawhorse where they diggin’ a ditch, is that what happened?”

“Yeah, that’s a helluva light. Makes me look like a roving hole in the road. I actually bought it, though.”

Soon I was continuing on my way to Mobile, where I had a brief run-in with the law about the small matter of riding a bike through the Bankhead tunnel. It could have been from a movie — a skinny version of Burt Reynolds wearing a southern cop costume regarded me under his blue lights, wondering aloud what I was doing in his tunnel. But he was rather friendly, in a guarded fashion, and I survived the encounter to arrive at a beery Kappa Sigma frat party. And it was already feeling like long-distance travel again. Florida was suddenly far, far away.

The next day saw me into my 13th state — Mississippi. Past a tiny town with shouting kids in a ball field marked by a “Drink Coca-Cola” scoreboard, past vast stretches of open fields and untouched woods, past roadsigns riddled with buckshot, past beer bottles in the ditch. I arrived in Vancleave at about 3:30 and glided in to a graveled parking lot at the shouted invitation of 15 or so male teen-agers. who had begun their hootin’ and hollerin’ the moment I rounded the bend.

Drinking Bud and Boone’s Farm, leaning on their cars in the April sunshine, they began the interrogation. “Man, you talk funny,” one said.

“Me? I thought all you guys talked funny.”

“We ain’t got no accent, man. but ah kin shore tell yore from the north! Where you comin’ from, anyhow?”

Another chimed in. “Ohio? Ain’t that up past Wiggins somewheres?”

“I didn’t know you could get here from Ohio,” someone else observed.

After autographing everything from a Boone’s Farm bottle to a rumpled paper bag, I was once again on my way — on my way to Biloxi. First, I tried to pay a pilgrimage to Keesler Air Force Base, where I spent seven months of my brief flirtation with the military, 13 long years ago. I spent all that time trying to get out, and now they didn’t want to let me in. It figures.

But then I arrived in Long Beach for a weekend of fine food, excellent hospitality, kids and a short-lived windy beach party. (The latter two came together as I lit the bonfire: “Oooh, freak-a-zoid!” cried a nine-year-old girl, somehow summarizing everything perfectly.)

And so the journey continues. Daily cultural readjustments are the norm. The system is streamlined. This life now feels so natural that the thought of my old Ohio house is as curious and remote as that winter at Keesler AFB so long ago.

When I peered through the tall chain-link fence after being turned away by the Air Police, in fact, nothing even looked familiar. Nothing at all, that is, except the endless gleaming railroad tracks just outside the perimeter.