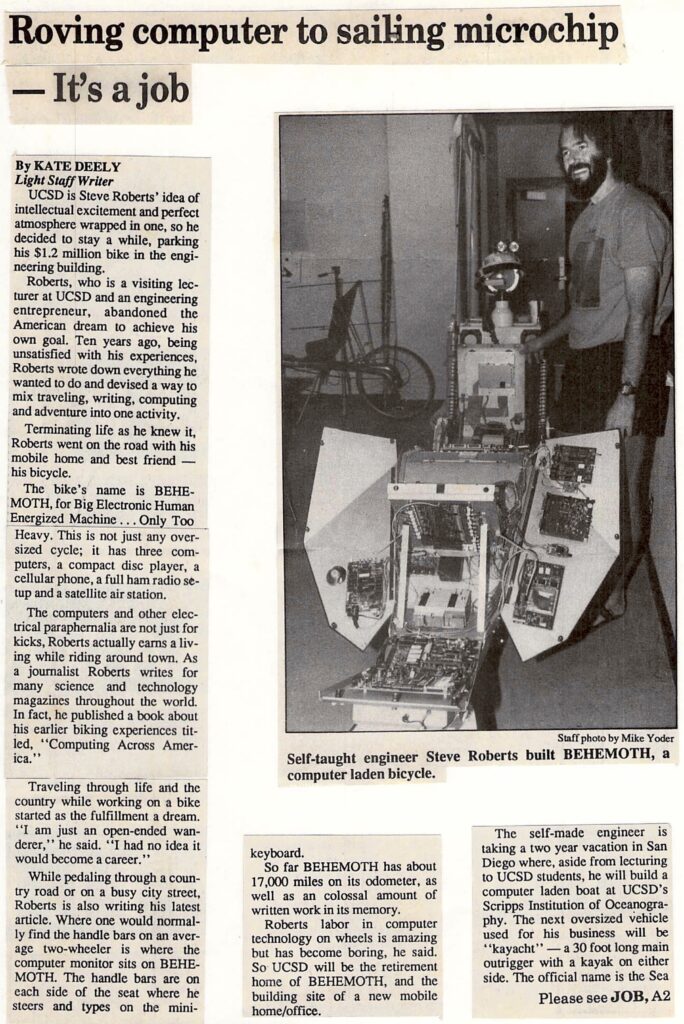 This local newspaper article was published in the La Jolla Light during the early days of the Microship project being hosted at UCSD, with a team of engineering students assisting.

UCSD is Steve Roberts’ idea of intellectual excitement and perfect atmosphere wrapped in one, so he decided to stay a while, parking his $1.2 million bike in the engineering building.

Roberts, who is a visiting lecturer at UCSD and an engineering entrepreneur, abandoned the American dream to achieve his own goal. Ten years ago, being unsatisfied with his experiences, Roberts wrote down everything he wanted to do and devised a way to mix traveling, writing, computing and adventure into one activity.

Terminating life as he knew it, Roberts went on the road with his mobile home and best friend — his bicycle.

The bike’s name is BEHEMOTH, for Big Electronic Human Energized Machine… Only Too Heavy. This is not just any oversized cycle; it has three computers, a compact disc player, a cellular phone, a full ham radio setup and a satellite air station.

The computers and other electrical paraphernalia are not just for kicks; Roberts actually earns a living while riding around town. As a journalist Roberts writes for many science and technology magazines throughout the world. In fact, he published a book about his earlier biking experiences titled, Computing Across America.

Traveling through life and the country while working on a bike started as the fulfillment a dream. “I am just an open-ended wanderer,” he said. “I had no idea it would become a career.”

While pedaling through a country road or on a busy city street, Roberts is also writing his latest article. Where one would normally find the handlebars on an average two-wheeler is where the computer monitor sits on BEHEMOTH. The handlebars are on each side of the seat where he steers and types on the mini-keyboard.

So far BEHEMOTH has about 17,000 miles on its odometer, as well as a colossal amount of written work in its memory.

Roberts’ labor in computer technology on wheels is amazing but has become boring, he said. So UCSD will be the retirement home of BEHEMOTH, and the building site of a new mobile home/office.

The self-made engineer is taking a two year vacation in San Diego where, aside from lecturing to UCSD students, he will build a computer laden boat at UCSD’s Scripps Institution of Oceanography. The next oversized vehicle used for his business will be “kayacht” — a 30 foot long main outrigger with a kayak on either side. The official name is the Sea Moss Microship.

Everything in this invention will be computer controlled almost, according to Roberts. While floating in the middle of the sea, Roberts will continue his writing and communication to the rest of the non-nomadic world.

The boat will have 16 microprocessors and six full-scale computers which include three Macintosh, a SPARCstation, and a wireless powerbook.

The Microship is expected to be completed by spring 1995. Twenty UCSD engineering students will be working with Roberts for class credit. Maybe he should be graded too, because this inventor never graduated from college and has taught himself everything he knows. Roberts claims to have been an “electronic hobbyist” since he was 8 years old, and said the fun of learning has never stopped. “If you are passionately interested in something you will learn how to do it,” he said.

What Roberts will do next, no one knows, including the man himself. But he claims his purpose in life is to travel while searching for some intellectual stimulus and romance while publishing a few stories along the way.

Where is he going to sail when the boat is completed? He is unsure of that too. “If you think too much about where you are going, you will lose respect for where you are,” he said.