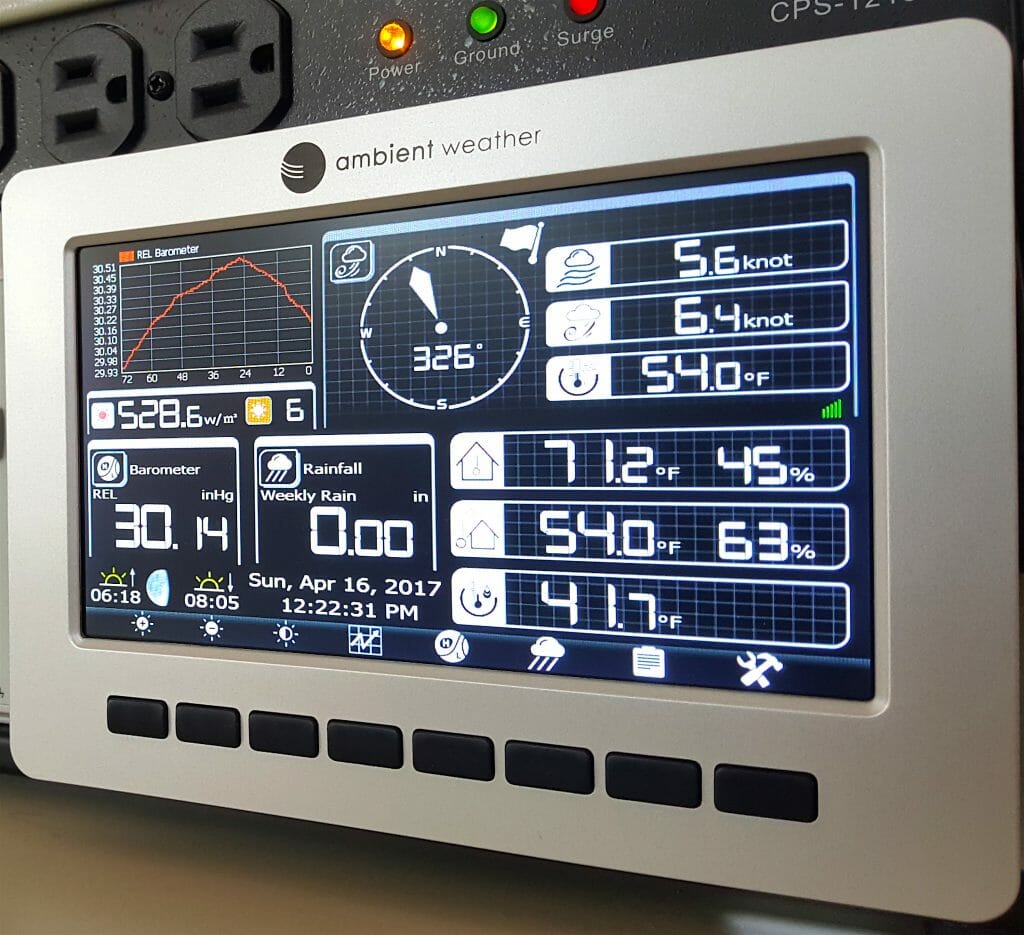 Datawake was named for a central theme of this project: slurping information from a wide variety of sensors, presenting it on a console, then leaving a wake of data astern. “Sensors” come in many flavors, and I use the term to include status bits, temperatures, radio traffic, video, navigation data, network and server logs, motion detectors, and anything else that conveys the status of the environment… including the weather.

Expensive nautical sensors are poor at visualization compared to home weather stations. There is a whole culture around these, including public servers crowdsourced with data from thousands of volunteers. Why not? Here’s the latest addition to the Datawake console… the Ambient WS-1001-WIFI (Amazon link is to improved model with Internet connectivity) tucked beside the Rigol power supply:

I’ve wanted a weather station on the boat for a while, but every time I started to research the options I got overwhelmed. There’s a lot to learn, including which products are poor, hard to use, or expensive to integrate… and last week I almost back-burnered that quest yet again. But I started noticing references to this Ambient product (often referred to as a “clone” in the weather geek forums, as it is made by Fine Offset in China), and found myself attracted to the display. It is much nicer than the ones that look like they were made in the ’90s, or those that do “fake color” with filters over a monochrome LCD. This actually looks sweet at about $300, and the size was perfect.

At first, my intentions were simple. I’d mount the sensor pod on the upper deck, stick the indoor sensor somewhere, mount the display on the wall where the Circle of Fifths clock used to be, then sign up to feed my data to Weather Underground. This is all turn-key with the product, and I planned to turn on logging to the internal Micro SD card so I could extract raw historical data down the road. But the project quickly became more interesting with my friend Steve Mitchell of Sailbits visiting from Seattle.

First things first… we couldn’t tinker with this until it was generating data, so I clambered topside to consider options. Fortunately, there is a stainless stub at the end of one of the spreaders on my radar mast, and with a bit of digging around the raw materials inventory I found some clear vinyl hose that perfectly filled the gaposis between that and the sensor array support tube. And by “perfectly,” I mean that it was an interference fit into the tube, and clamped solidly to the post with a hose clamp. Easiest topside mounting job ever, and it doesn’t even need wires! It does have to point north for the wind direction to mean anything, so I fine-tuned it with my hand-bearing compass and tightened it down.

We powered up the display and were delighted to see it immediately begin reporting conditions, so conversation turned to what to do with the data stream out of the device (HTTP). Steve is a weather geek and has been doing this for 20 years… and he lives and breathes network architecture. I just stepped back and watched as he conjured the system, which came to life in about an hour. I’ll link you to his much more detailed explanation in a moment, but basically, this is what happens:

One of the machines sitting in the console aboard Datawake is an Intel NUC running Linux. This has been devoted to Zabbix, which is a suite of network monitoring tools. It had lots of clock cycles available, so Steve installed weeWX, an open-source system for doing clever things with personal weather stations. He did a router trick to redirect the HTTP stream that my Ambient box thinks it is sending to Weather Underground, then had weeWX use that to create a website that appears both locally and at the new URL hosted on an Amazon cloud server, updated every five minutes:

Meanwhile, the system also feeds three public aggregators (links are to my own data):

If you are interested in studying Steve’s weeWX implementation as well as additional context from his decades of experience with this kind of data, he has a post at SeaBits that gives a much more detailed explanation.

May 2020 Update: Steve now has a page with a new generation of weather tools that can handle data from a moving boat.

And with that… it was done! A single afternoon’s work, with a couple of follow-up tweaks, and we have added yet another virtual anchor to this boat. There is a new item on the “preflight checklist” that requires me to interrupt the outgoing weather feed lest it look like some anomalous microclimate when I get off the dock. I also feed ADS-B data to FlightAware, although that can handle changing GPS coordinates, and I still operate the Friday Harbor radio check system on Marine VHF Channel 28. (At least I’ve handed off the AIS reporting station to my friend down on Griffin Bay… location-based public services are incompatible with that “open-ended wandering” I keep saying I want to do!)

But they are fun and very useful… especially when I can observe little anomalies and then have them corroborated by data collection and visualization tools. The solar eclipse was interesting…

If you are interested in replicating all this to add to the fine-grained weather-reporting network, I am very pleased with the Ambient 1001 used here… and they also have the WS-1200-IP that would have slightly simplified the process of getting the HTTP output stream into a useful piece of local code. Still, it is pretty much locked in their ecosystem, requiring work-arounds to accomplish the kinds of things Steve did… so if you want to replicate this, I do recommend the 1200 (almost the same price, with all the same features plus that added ObserverIP box). Steve’s article gives lots more information about how to take it from there.

Meanwhile, back on Datawake, the topside is getting ever more prickly with antennas and sensors… soon I will be able to say that she’s in Bristle Condition! I’ve just acquired the hardware to add a stainless tripod to the pilothouse roof; this will support the 5-band HF dipole and a PTZ camera. Two other antennas are slated to join the ones around the upper deck, and at some point I’ll swap out the existing Marine VHF stick. And that white all-round light at the top of the mast will be replaced by a magnetic loop and an LED. Hope I don’t run into any low bridges…