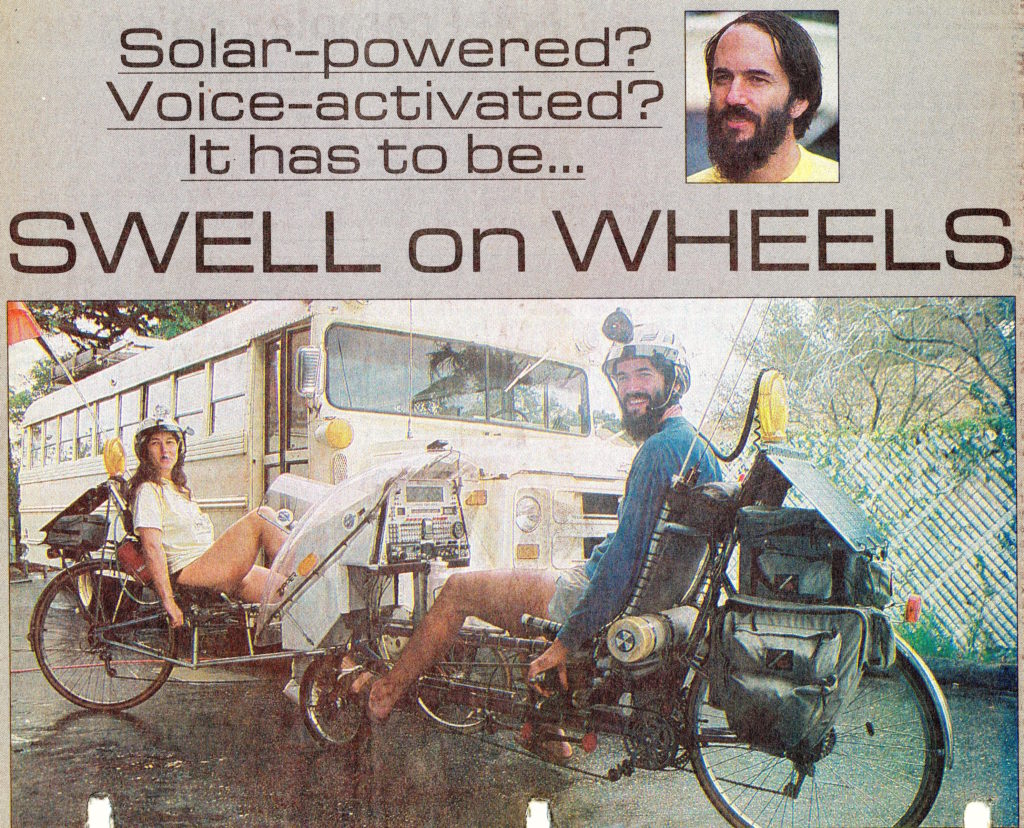 I am fond of this enthusiastic story, partly because of the photo above… Maggie and I spent a couple of months in a parking lot behind an old auto dealership in Titusville, converting that 1968 Chevy school bus into a mobile home and office with berths for both bikes, a king-size bed that could be converted to desk/couch or two facing couches, and a little kitchen area. The machine was a beast, but this was exciting since the Computing Across America book had just come out and we were looking forward to a speaking tour around the US. It ended up lasting about a year, covering 16,000 miles… and this photo was taken just before launch.

ON THE ROAD: Free-lance writer Steven Roberts and companion Maggie Victor, above, travel in high-tech style. His recumbent bicycle has a five-computer brain powered by solar energy, while hers is slightly lower tech. A fairing protects his control panel, which resembles cockpit controls in a private jet.

If that picture could ever be synthesized, a pretty good likeness of Steven Roberts would emerge.

And like the offbeat author of On the Road, Roberts eschews convention except when it comes to the publishing world.

But while Kerouac’s inspiration came from meteoric darts across the Heartland in fast cars, with fast friends and lots of full bottles, Roberts makes his inspirational, cross-country treks at a leisurely 5-to-15 mph pace. It took him nearly two years to cover the first 10,000 miles. And while Kerouac found success documenting a subcultural movement, Roberts’ claim to fame is being able to document while he’s moving.

Before the comparison is laughed off too quickly, remember that Kerouac broke new ground by fixing a teletype roll to a manual typewriter and pounding out novels in blistering five-day stretches, never pausing for fresh typing paper.

Roberts is in just as much a hurry, not even taking time to pull off the highway before etching his prose into the bike’s souped-up computer memory. A specially designed, eight-finger keyboard and highly modified Radio Shack portable computer screen facilitate the maneuver.

At the heart of the 275-pound “electronic cottage on wheels” is a Hewlett Packard Portable PLUS computer linked to four other computers that give the contraption a whopping half megabyte of processing power. A motorcycle-style fairing up front guards a private jet-like control panel for the instruments.

A completely digitized Random House Dictionary helps Roberts with his spelling, and a ham radio allows him to instantly transmit — or uplink — written words to some 60,000 home computer enthusiasts who monitor his infrequent columns on a vast “GEnie” computer network.

The network, which even stretches to Europe, provides Roberts with lodging through a system of computer hostels.

All Roberts has to do to complete his business transactions is find a pay phone. Using a telephone line, he can have thoughts that blossomed into copy on the trail on his publisher’s desk in minutes.

The five-computer brain mounted on the bike also brings Roberts his mail. When it gets too dark or too distracting to read, a voice synthesizer reads his messages out loud.

With front and rear-mounted solar panels, the bike’s electrical power is on the other side of the next cloud. Storage batteries keep his office/home humming in less than sunny times.

Roberts and his 35-year-old traveling companion, Maggie Victor, who rides a slightly lower tech version of the same bike, rolled into Titusville in December after stopping in Volusia County to buy a 1968 Chevy school bus. The two have been customizing the bus while it’s parked behind a now defunct used car lot.

Roberts said the addition of the bus to their high-tech trek is part of their plans to launch a nationwide promotion tour for Roberts’ fourth book, Computing Across America — The Bicycle Odyssey of a High-Tech Nomad.

The two plan to be at the Frontenac Flea Market from 9 a.m. to 3 p.m. Saturday and Sunday to autograph copies of the book.

“Basically, my home is Dataspace,” he says, rotating his head to acknowledge the reams of information that float in the air in the form of radio waves. “This is my hometown. We never really leave home. It is a wonderful blend of freedom and security.”

Roberts dropped out of Rose-Hulman Institute of Technology in Terre Haute, Ind., in 1970 halfway through his freshman year when he became frustrated at the slow pace of the curriculum.

When he was 20, Roberts’ home computers — unusual at the time — won him local media attention which in turn won him business offers.

“I always seem to turn my hobbies into businesses,” he says with a wry smile. But it wasn’t long before Roberts began to tire of running a business, so he sold Cybertronics and turned his attention to writing for computer journals.

“I made another interesting transition. I turned another hobby into a business and became a so-called free-lance writer,” he said.

But the liberating free-lance lifestyle soon became a ball and chain. By the early 1980s, Roberts said, his debts were mounting and he began to feel tied to his desk. He was overwhelmed by the need for another transition.

“I had an epic garage sale and converted all my belongings into that bike. I can’t really say how much it cost, because so much of it is in time. It would come together a piece at a time. I would go down and sell something and use the money to buy a part for the bike. It took about six months to get the basic bike together.”

But staying on the road has not meant the end of Roberts’ free lance or book writing career. In addition to the book, Roberts’ on-the-road musings appear in his monthly magazine, Journal of High Treknowledgy, which also features Victor’s elaborate recipes.

The two plan to stay in the Central Florida area until work on the bus is complete. Naturally, there is no fixed time schedule for the promotion tour, Roberts said.