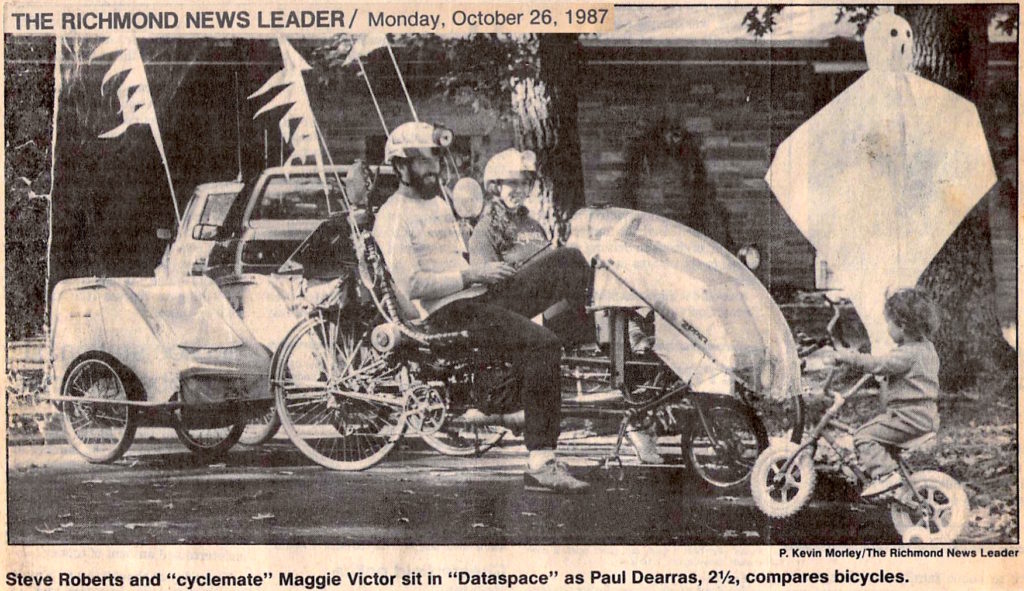 I have fond memories of this time… visiting the interesting fellow discussed in my Technology Update story, adding more ham radio capabilities to the bike, and very much in the groove while heading down the east coast. Here is the article in the Richmond newspaper…

As Roberts describes it, “I am an agent of future shock — a high-tech nomad, a pedal-pushing free-lance writer in love with that sweet piece of asphalt known as the road.

“My home, if I can be said to have one, is Dataspace; my vehicle, the wondrous Winnebiko.”

Roberts became a “high-tech nomad” in 1983 when he decided to “chuck it all” and take to the road on his Winnebiko, a recumbent computerized bicycle.

“I started a little over four years ago, I sold my house in Ohio and decided that what I really wanted was a lifestyle that would combine all my passions into one,” he said during a weekend interview at the home of a friend, James M. Dearras, on Margate Drive. He pedaled here from Washington.

“I thought that through a little bit and decided that since I like bicycling, adventure, travel, meeting people, computers, networking, ham radio, publication and publicity, marketing, all of that stuff… the only logical choice was to sell my house and move to a bicycle with computers and travel around the country and write about it,” he said.

Roberts, 35, said he has pedaled more than 14,000 miles across the nation while operating a free-lance writing and consulting business. His trek, he said, really isn’t that hard with today’s technology.

“The trick to the whole thing is portable computers and networks,” he said. “Technology that lets you run a business while traveling is pretty much the key to the whole thing. I can live on a bicycle and still run an active consulting and free-lance writing business.”

The technology, or Dataspace, that keeps Roberts’ business going while he’s pedaling is the 275-pound “electronic cottage” equipped with five computers that has been his home and office.

Roberts designed most of the Winnebiko himself, including all the electronics.

“There’s somewhere close to two years of my life in that thing,” he said. Among other things, the eight-foot-long vehicle has:

“This thing has gone through a lot of revisions,” he said. “The first version didn’t have a control console. It had something that I called my electronics package but it was pretty primitive and I carried a portable computer in the back. But … I couldn’t write while riding.”

Even with the revisions, Roberts still does most of his writing on a portable computer. He can write while pedaling using an on-board word processing system and a handlebar keyboard.

“It’s really nice while riding down the road to be able to get an idea and fire up the system,” he said. “I don’t try to do detailed perfect copy on the bike. It’s just to capture things.”

The first 10,000 miles of his trip, which took him from Columbus, Ohio, to San Francisco, was captured in his book, Computing Across America, which he wrote during a layoff.

During his vacation from the road, Roberts rebuilt the bike to its existing state. He also met his “cyclemate,” Maggie Victor, who has been traveling with him for about a year.

As part of his work, Roberts publishes a monthly journal, Computing Across America: Journal of High Treknowledgy, with about 200 subscribers. He also writes articles for magazines and has a syndicated column.

In addition to the technology that affords him the freedom to write on the road, Roberts says he also has help from friends in Raleigh, N.C., and Chico, Calif., where his business and publishing offices are.

Roberts, a native of Louisville, Ky., says he travels “for the experience itself. It really is fun, that’s the bottom line. That is what is hard to explain to people who are in regular careers. The bottom line is not financial,” he said.

Where is he going from the Richmond area?

“One of the things that came out of my book is the observation that if you think too much about where you’re going, you lose respect for where you are,” he said. “I have no idea how far I’m going or where I’ll stop.”