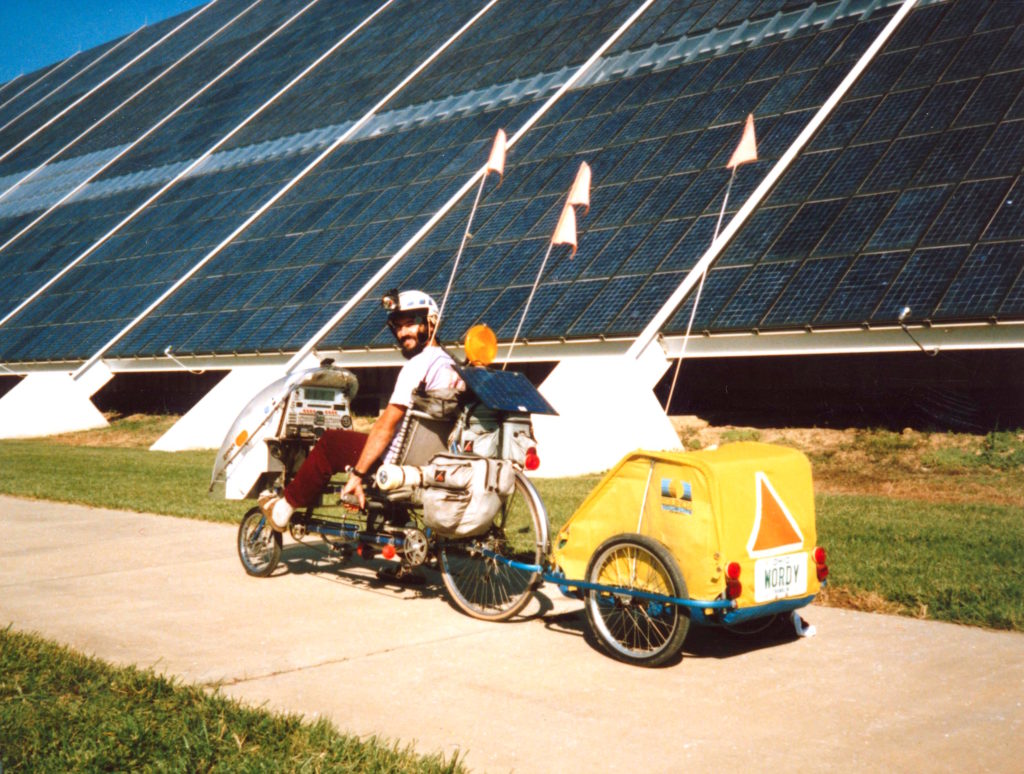 At last we have fled the madness of metropolitan DC. Looking back, it seems a marathon — a sort of delirium like those tangled memories of fevers past. For a month we cruised the confusion, working, doing the media dance, visiting new friends and old… torn between the myriad temptations of megalopolis and the sweet silence of the countryside. We visited GEnie, toured the Solarex plant, and added a new ham radio station; we hunkered over keyboards various and pounded away on writing projects until the sense of a season passing became a sort of agony…

It’s getting cold and wet out there!

And so, last week, we headed south. Again on a bike path (this time the Mount Vernon trail), we lazily cruised along in blissful ignorance of DC traffic. The petroleum-gobbling phalanx was but a dull roar to our right, no more challenging than the jets overhead, the languid Potomac to our left, or the dank marsh under the wooden bridges that clattered occasionally beneath our overloaded wheels. Insulated thus from reality, we drifted south until — abruptly — the shoulderless nightmare of rush hour Highway 1 reminded us of all we’ve been missing during our long DC layover.

6:00, encroaching dusk. Our host was yet 20 miles south in Dumfries, waiting dinner, watching down the lane for the errant cycling strangers who had called from the blue to announce their arrival. Frenzied commuters and massive trucks blasted by, irritated by our presence, kicking up a heavy wake of hydrocarbon haze to sting our eyes and blur our vision. The land was folded like a massive washboard, 3 mph up, 25 down, over and over, over and over in the cold darkness, hot sweat soaking fabric only to chill our flesh with each downhill run. Through it all we pedaled with a sort of panic, wide eyes searching headlight-dazzled mirrors, muscles taut, teeth clenched… pushing our exhausted bodies far too hard in the subconscious but entirely rational need to get this hell over with as soon as possible.

We survived, barely, and staggered shivering into a spacious house of wealthy attorneys for a grilled dinner and a fitful sleep of restless dreams. Then morning, on the road again, just like in the old days — DC a whole map-fold away and already sort of… unreal.

The next night, we found ourselves in Fredericksburg — in the home of Rus Phillips, a bright high-school student and GEnie subscriber who responded, many months ago, to these random tales. “You know he’s only 17,” his mom warned me on the phone, a bit hesitant, not quite sure what to make of her son’s electronic invitation to a couple of sweaty strangers out there on the highway.

“That’s the beauty of the network,” I told her, standing sore-kneed in the phone booth. “People can make brain-to-brain contact without being distracted by each others’ physical attributes. Your son’s an interesting guy.”

“That he is…” she said, and gave me directions to the house. In short order we were there — meeting the young computer-wiz and his whole active family, reminded intensely of the lifestyle sampler that makes this journey what it is. In the lingering aromas of a crab ‘n chili dinner, still chuckling at the antics of the twins and the flying squirrels out back, we fell asleep, hard, out of shape from the month of DC interviewing-writing-visiting-playing-etcetering.

And then there’s technology.

There have been quite a few high-tech treats in the last couple of weeks — as well as a few of the usual battles with balky hardware (the mere fact that something is exotic and expensive does not, alas, make it useful). My Phil Wood disc brakes continue to hold the record for receiving the most curses aimed at any piece of hardware on my bike, and the little inclinometer looks pretty but never budges from the 0-degree mark (the steel ball rusted within a month).

But the electronics systems are growing vigorously. I’m writing now from Richmond, where our host is the architect of the local packet multi-port BBS and mail-forwarding network — a fellow addict of high-tech toys who has had me drooling over the latest gizmology all week. Seeking the source of RF noise in the Winnebiko, we rolled a 1.5 gigahertz spectrum analyzer in from the back room and signal-averaged the trash down to a few key birdies. When an NMOS ROM in my bike mysteriously blew on Sunday night, we downloaded a new version from Motorola and stuffed it immediately into CMOS. Video is piped throughout the home; a Rolm computerized phone system keeps everybody in communication. This is a glimpse of What Might Have Been Had I Not Been Restless — a maddeningly inviting playground of ham radio, computers, tools, toys, widgets, and entertainment systems… all paid for by his product, the miniature barcode wand used by Federal Express. This has been a week of technology transfer: I replaced the ghastly C&K buttons on my handlebar keyboard with sleek units from the Microwand… and Jim is now online.

His arrival on GEnie opens an exciting new communications path to me. I’ve been using packet radio somewhat sparingly since my address keeps changing (how do you define a “home BBS” when moving all the time?). Yet packet seems a perfect technology for the bike — an ad hoc network, unconstrained by the need for nodes and phone lines. I’ve been playing with packet, of course, active on the network when in a town for more than a few days but disappearing into the vapors of Dataspace when on the road. Packet mail follows me around for weeks before catching up.

But now, there’s a gateway. Mail from the ham radio community reaches me through KA8OVA@WA4ONG, the PBBS address here in Richmond. Jim’s system notices the address, forwards it to a holding file, then signs on to GEnie in the middle of the night to send it to WORDY — in the process checking for mail from me that needs to cross the other way into packetspace. The net effect is a cusp linking two layers of Dataspace, a phenomenon which, as you know, has been all too slow in coming. We need lots of them.

Ham radio has been much on my mind in other forms as well these last few weeks. I finally got the HF station working — based on a little box called the Ten-Tec Argonaut 515 that shoves a couple of watts out the coax connector on its back whenever I activate the electronic keyer. It’s only gravity, only another 15 pounds or so…

It’s difficult to express the feeling of prowling the ham radio spectrum to readers already familiar with networking. There you are, out there at your computer, routinely swapping mail with people all over the country and cognizant of the fact that global communication is not all that exotic. Satellites float around, joining earth stations and a host of large computers to form a stable substrate for reliable datacomm. Networking is cheap — and only rarely is there even a glitch in the dataflow.

But try to imagine a signal about as powerful as a miniature Christmas-tree bulb, generated from captured sunlight and shoved into a wire hanging in the trees. It makes a standing wave out there (through some mysterious process), propagates rapidly into space, hits the ionosphere and bounces back to earth a time or two, then causes a few millionths of a volt to appear in a similar piece of wire… in Germany. A stranger’s ears perk up; he touches a key to call my name; then through a symmetrical process I hear distant beeps, dredged out of the static by a box of stuff mined from the earth. I tell you, this is magic… no matter what the engineers say!

It’s also a hell of a lot of fun. It was a thrill to sit outside at midnight, breathing porchlit vapor in Arlington, Virginia, chatting Morsewise with a guy named Greg in Armour, South Dakota. It was even fun to beep back to Columbus — for there’s something deliciously adventurous in cruising the spectrum for action, watching for soft signals in the noise that are every bit as tempting, in their own way, as those mysterious special smiles in the singles bars of yesteryear. This cannot be compared to computer networking — nor even to the digital anarchy of packet radio (which sacrificed mystery for the sake of reliability). Packet is a marriage of magic and efficiency… DXing is a wild flirtation with a whole spectrum of unknowns, an endless quest for someone a little bit farther out or a little bit hotter than your last contact…

And as the sexual revolution dies in the stranglehold of AIDS hysteria, the radio world explodes with new possibilities — for the sunspots are coming back! Too bad most hams are male…

Before leaving northern Virginia, we made one last foray into Maryland — to Rockville. GEnie hosted a press event in our honor, even providing a police escort through the busier parts of town. I offered the cop a full-time job following us around the country with his blue lights a-flashing, for the sense of protection from traffic was an unfamiliar delight. But he declined, expressing doubt that he could make off with the car.

My existing impression of GEnie as a healthy company was reinforced by the visit. Unlike the competition, this is not a stuffy corporate culture (even if it IS a part of a big company). Security in the building is tight, but behind all that people are friendly and playful, happily taking the time to gather in the parking lot with balloons and cameras to enjoy a morning of socializing. ESPN covered the event, which aired on Nation’s Business Today on the morning of the 14th.

We also visited Solarex, where the bike’s rear photovoltaic module mysteriously put out 770 mA for the first time ever (about 10% over my previous record). “So that’s why you located in Rockville,” I observed. “The sun does something special here.” Turned out there was more than one sun that day — a ring of bright clouds was acting as a giant lens. Duly inspired, we pedaled up to Frederick to see the “breeder,” an impressive facility with one of the world’s largest PV arrays — a place that turns incoming rock into wondrous devices for making power out of thin air. Why this still hasn’t caught on with the general public, I don’t know… but it produces free energy with no overhead or safety problems. We upgraded to the latest models and pedaled toward the sun.

And so I’m writing this on our last night in Richmond. It has been a week of work: of online searching and writing for clients, writing proposals, doing bike surgery, building a new friendship, and catching up with the endless flow of information. One new project: online in the CAA area about now is a new series of articles — a biweekly column I’m writing for Computer Currents about the technology that makes this adventure work. If you’re interested in the infrastructure of the Traveling Circuits, check it out.

South, now — hopefully to land somewhere warm before winter! Cheers from the road…