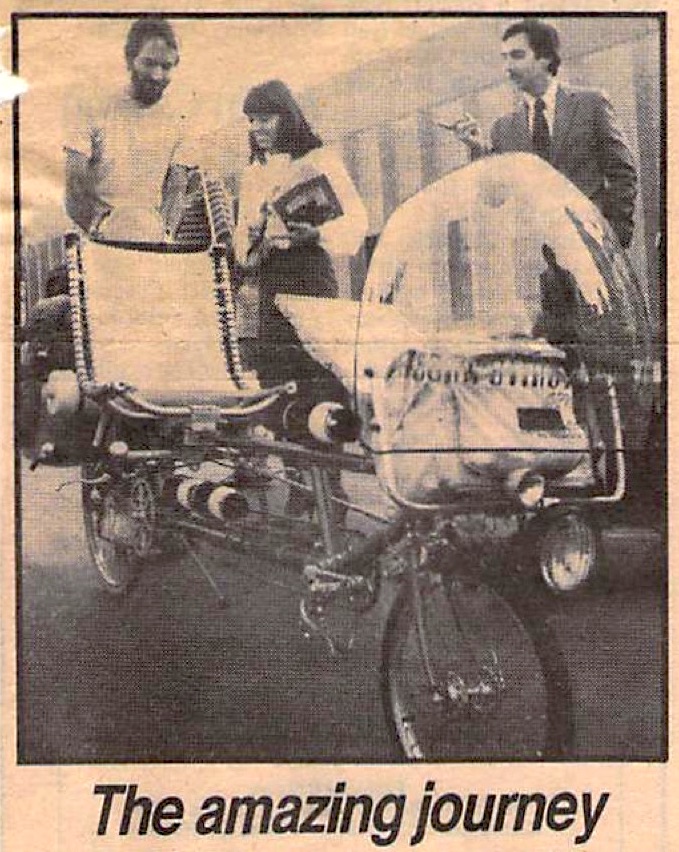 One of the home-town papers in Dublin, Ohio published this little photo-caption just after I pedaled the Winnebiko away from my home of four years. The image was from the send-off on September 28 in the CompuServe parking lot. In the image, I was demonstrating the Radio Shack Model 100 laptop that would become my link with the network.

Free-lance writer Steven Roberts, left, recently boarded his computer-equipped recumbent bicycle and left Columbus on a rather unique Journey. Roberts, a Dublin Road resident, hopes to prove that computers are versatile and light enough that they can be taken — and put to use — just about anywhere. To prove his point, he plans to make a year-long, 14,000-mile loop around the United States on the bike. Along the way, he will write and store articles in his computer which he will send back to his editor/manager in Columbus via the CompuServe network. Roberts plans to complete two books and numerous magazine articles while on the road.

This next one was in the scrapbook with no date or publication name, so I’m throwing it here… looks like it ran sometime earlier while I was preparing for the adventure.

NOW COMPUTE THIS — When Steven Roberts leaves this fall for a 10,000-mile bicycle trip around the country, he’s taking his office with him.

Roberts, an author and owner of Words’worth Inc., will have a microphone attached to his protective helmet, enabling him to dictate into a tape recorder while he rides. He’ll also have a Radio Shack Model 100 portable computer that will allow him to write during breaks in the trip. All he has to do then is get to a phone and send the stored copy to a computer here.

Kacy Branstetter, who will be processing Roberts’ called-in copy, says the 30-year-old businessman hopes to complete two books during the trip, which he expects to take longer than a year.