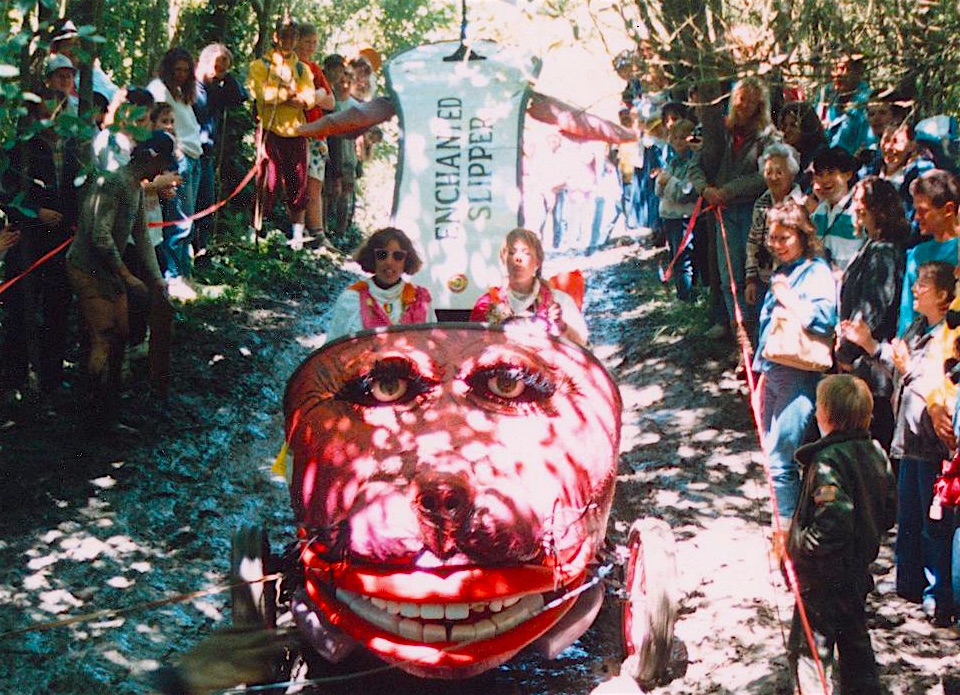 Photo above: June Moxon with crew in
Enchanted Slipper on Slimy Slope

These are the times that make all the others worthwhile. Cold, misty wind. Surf rumbling in the dark; fresh thick Humboldt beer the color of night foaming in a plastic cup. A mountain bike beneath me, warm and responsive. Along two miles of blustery sand between ocean and bay is a ragged encampment of kinetic madmen; hungry for adventure I drain the brew, draw a waterbottle full for later, and pedal south.

Biting wind, fingers numb on the handlebars, wild grins in the blackness. The road barely visible; glimmers of firelight wavering through beery perception on either side. Now and again a strange face flashing orange in cigarette glow or bouncing behind a flashlight. Dark hulks parked haphazardly in the dunes: leering abstract dinosaur heads, a maniacally grinning 12-foot pink shoe, shotgun marriages of art and engineering. Laughter darting between wave crashes. Headlights on the bluff lashing deep into the sky, triggering confused memories of ancient rock concerts and laser shows. It’s a night, a wild night, and god damn, I’m alive after all!

I push into the wind, savoring the numbing cold and full bladder. Feeling! Wind spatters my face with light rain, and the chain grinds sand. Every nerve is alive, unlike the familiar Milpitian evenings of deadline-driven, coffee-wired urgency.

Ah, a fellow human! Indistinct in the dark is a mirror image, pedaling toward me. I recognize him before I really see him, and yes, I think it’s time. “Hi Jerry… what are the Christians up to?”

“Hey, Steve. They’re singing around the fire. The crosses were still leaning against the truck last time I checked.”

“I think it’s time for a firewood run, don’t you?” I ask casually. We laugh, and the sound is sinister and giddy, deliciously conspiratorial. I flash back two decades to the days when I had little to lose, freight hopping and riding drawbridges, tripping through strange nights, strange towns — immortal, curious, trying anything once.

The Christians have been irritating everybody. This is a Kinetic Sculpture Race party, the end of the second day. Dead Man’s Drop and the Humboldt Bay crossing are history; only Slimy Slope and a dozen or so hard miles remain. This night belongs to racers and friends, but what’s this? An encampment of proselytizing Jesus-hustlers has appeared in the middle of us, and all evening they’ve been tromping back and forth dragging 8-foot bloody crosses of 4X4 redwood beams, exhorting us heathen party animals to Witness the Glory of God. They’ve been crashing conversations, preaching aggressively, and challenging our restraint with something that smacks of the hard sell. One man was even accompanied by a brainwashed, doomed child of about 10, dragging his scaled-down cross…

Time to reconnoiter. Quietly discussing strategy, we pedal slowly toward the encampment of Christian soldiers, clearly distinguished from the others by a giant 30-foot cross planted in a low dune. The towering symbol is aglow with reflected firelight and casts eerie flickering shadows into the seaward mist. We coast past their military-surplus personnel carrier where the crosses had been stacked an hour earlier.

“Probably getting them out of the rain so they won’t be too heavy to lug around tomorrow,” Jerry observes. We stop at a discreet distance and watch awhile, quietly considering the options.

“What about the big one?” I finally ask, pointing skyward.

You know the kind of wide-eyed look of laughing horror that kids exchange when a prank is suggested that’s incredibly naughty, a bit dangerous, and exactly right? The look that says, “we could get in serious trouble for this, but what the hell… it’s worth it”?

We exchange that look.

“It has to be from the beach,” he says. Indeed, between the road and their fire is a snarl of vehicles — one bedecked with an array of flickering votive candles and some kind of verbose sign about The Word, Glory, and Salvation. They’re still snaring passers-by, even at this late hour, inducing many to stumble through the sand to avoid harassment.

We stash our bikes and find a long way around to the ocean. It’s a different scene out here… dark and magical, the barely visible beach littered with giant driftwood. Distant voices and windblown firesmoke rise from countless campsites, including the largest one of all. Their cross, grand and backlit now, towers magnificently over the scene like something from Dante.

We drop to hands and knees in the wet sand and let our eyes adjust. Moving slowly from driftwood to dune, we work our way toward the objective, absurdly conscious of playing junior commando. I have a brief thought about Maggie, warm in the bus somewhere up the beach.

Voices! Close! We drop to our bellies and wait, breathless.

“Paraaiise!” in an exaggerated TV evangelist voice. Giggles. “You drunk too, man?”

“Ohh, a little. This is great. Did you see Sister Sara back there?”

“Yea and verily, Brother. The woman’s feeling no pain!”

A new voice, female, heading our way from the Christian fire. “Oh shit! Who’s out there?”

“Just us Brethren, taking a Righteous Leak in God’s country. No peeking now…”

Giggles. “I can’t see a thing— oooff!” Muffled sounds of a struggle and more laughter.

“These are hard-core Christians?” I ask Jerry in a whisper.

“Incredible! This is quite an education.”

“I think we’re on to something. Let’s get a little closer.”

Creeping on our bellies, we approach the sacred icon as the Chosen Few continue their revelry. Tall grasses tickle our faces; sand works its way into our clothes. Raindrops tick-tick on my blue nylon jacket. A few inches at a time, we climb the last dune and peek cautiously over.

A few sleepy Christians are standing around the fire, one nursing a beer. Most have apparently stumbled off to bed; we watch the last few for a half hour or so, shivering in wet sand and stiffening into total silence whenever someone crashes cursing into the brush to relieve himself. We are almost at the base of the giant cross, no more than 20 feet from the fire. And… our strategy has just suggested itself: one good push and the giant false advertisement should drop heavily into the flames.

Not wanting to kill anybody, we wait until the last two guys wander up to the candle truck. “OK, let’s hit it!”

As one, we leap up, sprint the last few feet to the cross and throw our shoulders into it. It starts to give… but too slowly. “It’s in deeper than I thought!” Jerry says between grunts… and we push harder, harder, trying to hide our faces as it becomes clear that we’ve been spotted. “Damn!” One last huge shove and it drops to about 30 degrees, caressed by the smoke — but a big scowling guy is heading our way at a trot. “Run away! Run away!”

We sprint through dark dunes, leaping driftwood and unnamed debris. One pile catches me unaware and I land face first in wood, numb chin, dazed. Unhh. I struggle back up and we hurry on, zigzagging in the night until giggles overtake us. We collapse and look back.

They’ve given up the chase — we are invisible in the rainy night. A couple of guys struggle to straighten the cross and pause to peer out toward the beach, and there are stirrings among their vehicles. “Well, at least we shook ’em up,” I comment. “We sent ’em a message about how welcome they are. Someone will be up all night guarding that cross.”

“Yeah… that’s some consolation. But we should have dug around it, then rocked it back and forth a few times.” We recover our bikes and ride slowly to the bus, where we find our friends huddled in a quiet circle around the tiny fire.

“What? You’ve come back empty-handed? I thought you guys went off to look for firewood…”

Of course, the kinetic race itself was wonderful… it always is. Two things stand out now, a month or so later:

First, it was a potent reminder of play. The Bay Area is a serious place, dangerously expensive, and our pilgrimage to Humboldt County was a desperately needed reminder that there are whole populations out there that fundamentally enjoy life (and I’m not talking about fundamentalists). Easy to forget in the fast-paced City, even with all the thrilling technology.

Second, it was a useful perspective on the Winnebiko’s place in the world.

It has become a sort of altar for me lately — I bring it offerings of gizmos; I kneel before it daily; seekers come to pay homage to it; I see in it the sweet promise of an afterlife to the endless penance that is this layover. But one morning in Eureka, I pedaled past a couple of tourists in town for the Kinetic Sculpture Race. “There goes one!” cried the lady, whereupon the husband replied, “no, that’s just a normal bike.” I smiled, strangely refreshed, and then smiled even more broadly at my own reaction.

Oddly, the adventures that happen during non-travel seem somehow invalid, as if driving a mega-bus to Mount Shasta and clambering all day is less real than it would be if we sweated our way there aboard eccentric machinery. This is not entirely silly: it’s hard to flow into the spirit of adventure when it’s an abrupt discontinuity from normalcy, framed against Milpitian reality by a pair of hot marathon drives through the <yawn> Central Valley.

Nevertheless, we have our moments. We drove the bus up to Mount Shasta, getting our usual fuel efficiency of about 1.2 light-years per cubic-mile of gasoline, ostensibly to give a talk at a conference on amateur radio satellites. This I did, of course, but the real pleasure was in the mountain and the people… another case of living in a setting of deep beauty and affordable real estate, but no job market to speak of. Perfect escape.

And clambering to a false summit through the snow to frolic in cold brittle sunshine… that was a moment. So was an evening with Irv, the mid-70’s world-class ham who’s just starting to learn Spanish. And so was the evening with Michael the climbing guide and his family in their homestead below the mountain, lying in the moonlit bus and catching flickers of camp stoves from high above on the grandest and most poetic hulk of rock and snow I’ve seen in many a mile.

Back in the Valley of Silicon, we re-immersed ourselves in the Project, with a quick break for a Grateful Dead concert of tie-dye, twirlers, dancing, the sweet smell of smoke from what seems like a previous life… and of course, stunning music. I jam down railroad tracks on the mountain bike now and then, and occasionally wander up to Lupin for a naked day in the sunshine with a few hundred relaxed people-at-play. But mostly we just work at this crazy nomad business.

The new bike, a grand vision indeed, still seems impossibly remote. I have spent over a month on the CSPC WASU (cellulose-core silicon-matrix polyester-filled composite wheeled auxiliary storage unit, otherwise known as a bicycle trailer made of fiberglass over hot-glued cardboard). This is becoming the other half of the Winnebiko III, with a 72-watt solar lid and a flip-down work surface in the back that exposes a complete HF, satellite, and TV ham radio station. It is taking a long time to build.

Which is why the little tastes of adventure seem so poignant — they once were the essence of my life. Familiar theme by now? There’s good reason for it.

I struggle daily with an ever more complex device for escaping complexity, and sometimes the inconsistency is a bit overwhelming. Bear with me through this long dry spell (or better yet, take a sabbatical to move out here, and help me build this thing…).

Cheers from somewhere in clutterdom!