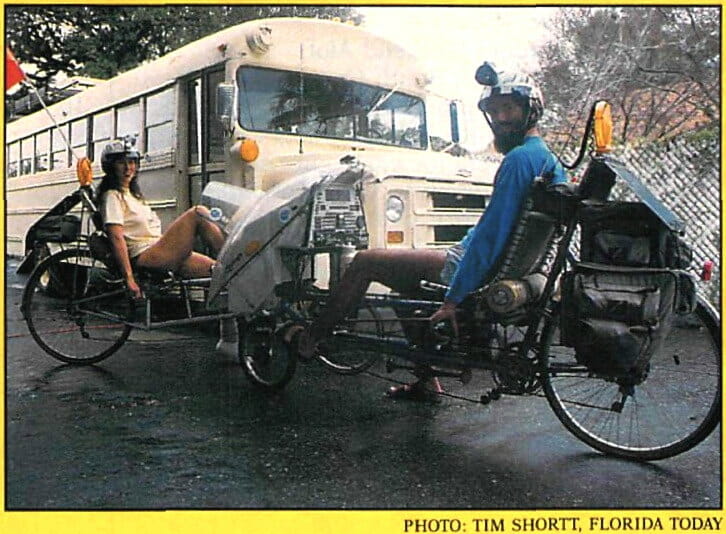 At the end of the Winnebiko II adventure covering both coasts of the US, my Computing Across America book finally came out… and I bought an ancient school bus in Florida to use as a mothership for an open-ended media tour. This became an adventure unto itself, covering over 16,000 miles (at about 6 MPG).

The photo above shows the bus behind a vacant building at a car lot in Titusville… they kindly let us hang out for a couple of months to build the internal furniture and get the monster ready for the road.

You’ll recognize Steven K. Roberts if you see him riding his Winnebiko II, the only computerized recumbent bicycle of its kind anywhere. This unique two-wheeler was Roberts’ home on wheels during a 10,000-mile trip around the country from his home in Columbus, Ohio, to the Pacific Coast.

The 275-pound machine is the result of Roberts’ desire to escape a successful but office-bound life as a freelance writer. It took a lot of time and work, but eventually the prolific Roberts had the bicycle he wanted, outfitted with a telecommunications system.

A customized dashboard features a display screen from the Tandy Model 100 computer, boosted to a quarter-megabyte of RAMdisk storage plus ROM-based software, including a database manager and an online dictionary. The handlebars contain an eight-button keyboard, so he can write about 30 words per minute while pedaling down the road. There’s even a voice-activated security system on board!

After the first 10,000 miles, Roberts started traveling with Maggie Victor, who, like him, enjoys traveling and computing.

Bikes are not the only RVs that Roberts owns. After his book, Computing Across America, was published last year, Roberts and his companion took to the road on a book-promotion tour in — what else? — a motorhome. Of course, it had to be customized like everything he owns. This more spacious home on wheels began life as a 1968 school bus, and the couple spent several months converting it to meet their particular requirements.

At presstime, the computerized twosome was still traveling by motorhome from bookstore to flea market to publisher. Never one to let the grass grow under his feet, Roberts is writing his second book and has plans to build Winnebiko III.