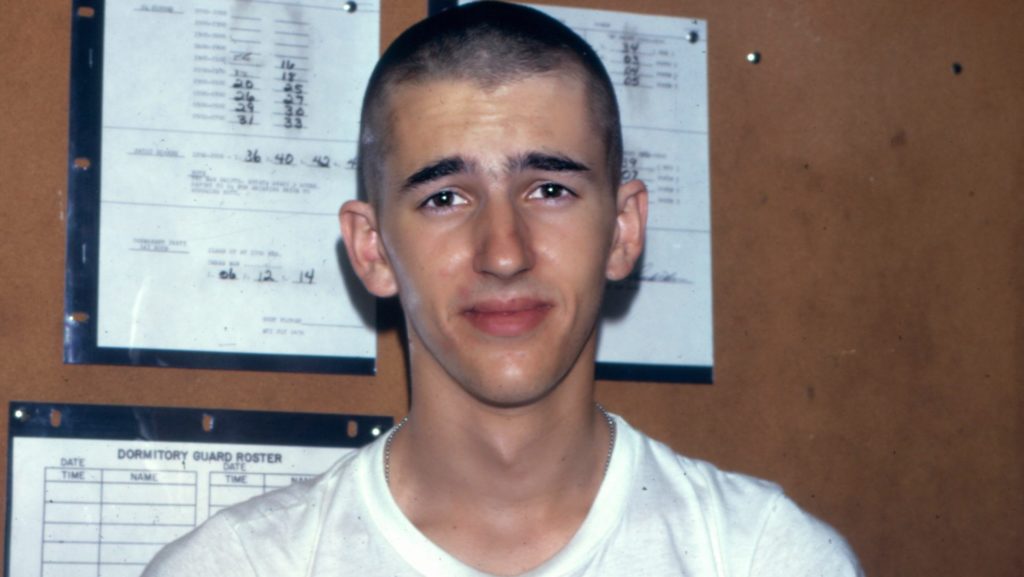 My odd decision to join the Air Force set an inevitable chain of events in motion, beginning with Basic Training at Lackland AFB in San Antonio. The date of this post is the beginning of this epoch in my life.

Given that this was 1971, hair was a rather huge issue… and the photo above shows me looking sad after the burr haircut turned me into what was known as a “pinger.” Ancient slides from the SRT-101 that I took to Basic (and which was kept locked up by the Training Instructor, as it did not fit the proscribed contents of the foot locker) turned up these images from that intense 7-week experience.

First, my cavalier attitude upon initial arrival, freshly-clad in USAF T-shirt and pith helmet, is obvious in this photo:

One day in June, I found a set of uniform ribbons and posed for a photo:

It was a difficult time for me personally… and not just because of the sudden regimentation after my meandering post-high-school path (two quarters of engineering school, freight-hopping, hitchhiking around the US, working as a deckhand on barges, and installing Autovon central office phone equipment on Army bases). Somehow I contracted mononucleosis, and slogged through Basic whilst growing sicker… running the dreaded “25th-day evaluation” with a fever of 103°.

But it was an interesting glimpse into a different world. One odd quirk was that it turned kids into cigarette smokers: while marching around base, there would be occasional breaks when the TI would shout, “Smokers, fall out!” Those who lit up would lounge in the shade of a tree while the nonsmokers would remain standing in the sun.

I would like to say that I stayed in touch with folks who shared the experience, but it faded quickly into nearly forgotten past… though finding these slides brings back some of the strangeness.

A Surreal Tale of Kitchen Patrol

One of the famous banes of the cadet life is KP… being chosen randomly to spend a day doing grunt-work in one of the base chow halls. This happened to me, but with a twist.

I have always tried to make everything fun, which translates into poking my nose into places and getting to know people. After lunch, I followed a cart out into the parking lot… where I watched huge untouched trays of food loaded into a slop truck that was heading to a local farm to feed the hogs. With a bit of discreet questioning, I learned that they deliberately cooked much more than needed every day… which kept the purchasing budget up while making their farming friends happy. I asked about feeding local poor people, but no.

I had been chatting earlier with one of the Vietnamese officers there for flight training, and saw him at a table, studying a binder. I took him back in the kitchen and told him what I had found. He looked very sad, shook his head, and said something about hungry people in his village.

But that was not the crazy thing. Between casual activism and clowning around with fellow KP-victims in what was a basically a welcome break from routine, I was managing to have a pretty good time… which drove the sergeant crazy. He would occasionally interrupt to give me a harder job or separate me from a friend, at last assigning me to the dreaded “pots and pans” workstation. In Texas summer heat, wielding hot-water sprayers and big brushes to scrub greasy cookware involves much sweltering, and within moments I was soaked with sweat in my heavy cotton fatigues.

Of course, I still managed to have fun. How else does one cope?

Suddenly: “Roberts! Get your ass over here. I have a job for you!”

He opened a pizza oven that was in desperate need of cleaning… there were deeply baked-in spills, black and crusty. “Clean this oven! I want it to shine like that table!” He pointed at a stainless work surface nearby, and handed me a bucket with hard abrasive pumice scrubbing block.

I got to work, noting that I was starting to scratch the enamel on the door. “Um, sir? You really want it to look shiny like that stainless table? This enamel….”

“God damn it, how many times do I have to tell you, Roberts? You deaf or what? You hippies make me sick. I’m gonna… just shut up and do the goddamn job, willya? Jesus.” He turned and walked away.

I got back to work, gradually chewing through the enamel and down to bare steel on the door, detailing around the edges. This was not easy, and there were parts near the hinge that were impossible to reach. Exhausted and sore-muscled, I was just starting on the interior when the civilian chef… who ran the kitchen… noticed what I was doing. Her voice cut through the cacophony: “HONEY! What the hell you doin’ to my oven?”

In the ensuing moment of frozen silence, you could hear a distant boiling pot and Vietnamese conversation out in the dining hall.

I put on my best stupid voice. “Well, um, ma’am, that sergeant over there told me to make it look like this table here.” I pointed.

Moments later she was towering over the sergeant. All I could hear from him was “yes ma’am, yes ma’am, I’m so sorry ma’am, yes I understand.” He glared over at me, but retreated.

I always felt bad about the damage to the oven, but damn, that was worth it.