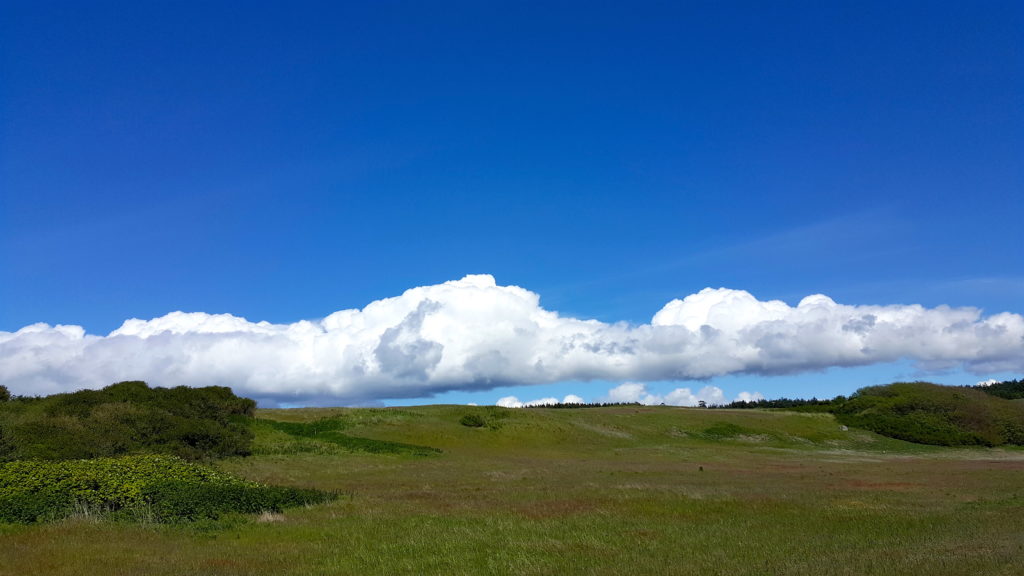 When you live on a bicycle, certain things take on larger-than-life significance. Hills, for example, never mattered much when I drove a car, and back roads were just that: back roads.

And then there’s the weather. An effective way to become really conscious of wind, rain, temperature and humidity is to simply get rid of your house, pack everything that matters to you on a bicycle, and live year-round on the road. Suddenly there are no windows to close when it rains, no air conditioner to crank up when it’s muggy. And what was once a pleasant breeze might now be a demoralizing headwind, a treacherous sidewind, or one of those grand exhilarating tailwinds that makes you think you can cruise forever.

When I began this journey, wind and rain were mysteries — capricious manifestations of the sky as seen with the nearsighted perspective of a man on a bicycle. Weather happened. Period.

But I slowly grew more attuned to these things. I learned to judge a cycling day by the feel of morning air and the whispering of leaves. I began to pay attention to storms, sometimes timing my passage to pick up a tailwind and skirt them without getting wet. Barring unexpected flat tires, I can usually target my arrival at the home of a distant host so that it occurs just before dinnertime — just long enough to allow initial greetings and a hot shower.

Yes, awareness of weather conditions is a key to cycle-touring survival.

But when I crossed the string of Pearls into Louisiana (East Pearl River, Middle Pearl River; West Middle, West and generic Pearl River), my weather awareness was yet vague: I had begun to sense some kind of unity to the interactions of earth and sky but hadn’t thought much about it. Then David Smith, my host in Slidell, offered to give me a grand tour of the National Weather Service installation where he works.

This would have been technologically appealing anytime, but was now especially so with the famed headwinds of Texas only a few hundred miles away.

I walked into the nearly windowless building late at night, finding a half-dozen men peering at screens, drinking coffee, and making cryptic notations on maps. They were watching the Gulf, studying the sky, integrating data from sensors far and wide into a meaningful whole. But what immediately captured my attention was a row of high-resolution displays that were showing continuously repeating “loops” of recent satellite photos. Clouds rolled across the screens, compressing the past twenty-four hours into seconds, startling me with its global perspective.

Standing there, contemplating a current and dynamic bird’s-eye view of North America, I watched the fluid patterns hypnotically repeat. There was a wholeness about it, a continuity, the clouds swirling like slow whitewater from west to east over mountains and plains. The outlines of the states had been overlaid on the changing satellite images, and there was almost a sense of dizziness, so real did it seem. I traced my route to date — observing with satisfaction that Columbus was socked in. Eye in the sky. I gazed down on a time-lapse America while around me bustled routine activity: templates slapping maps, jargon-filled conversation, facsimile machines and telephones.

“Like it?” asked a southern but tight accent beside me. I had evidently been standing transfixed for some time. I turned to meet a grinning, big-bellied Walter Copes, resident satellite meteorologist. He answered my basic questions, then loosened up and spent the next hour performing a brain dump on subjects ranging from the fine points of satellite image processing to the underlying causes of hurricanes.

Well I’ll be damned. It all makes sense.

His discourse explained the jet stream, why Kansas is dry, how boats sailing under clear skies can be knocked over by a distant thunderstorm, how the global monitoring system works, and where the uncertainties lie. He sketched a model of the globe, skillfully weaving the major influences (coriolis effect, solar radiation, evaporation, surface contours, and so on) into a system that quite predictably spawns local weather conditions.

Well, uh, sort of predictably. Until recently, all this monitoring and modeling technology was unable to beat a fifty percent accuracy in forecasting — a figure that could be achieved more cheaply with the toss of a coin. But now, accuracy is up to about 80% for the next twelve hours and 60% for a five-day extended forecast (anything beyond that is called an outlook, not a forecast). As the computer models are fine-tuned and begin to take more subtle factors into consideration, the accuracy slowly, very slowly, increases.

But deficiencies are many. The relatively stable weather patterns in the Midwest offer little challenge to the system, but mountains and seas drive meteorologists crazy. Factors as diverse as the Texan “dry line,” variations in water reflectivity, lazy meanderings of the Gulf Stream, and even a volcano thousands of miles away all interact to determine whether or not it will rain on the cockfights in Bogalusa tomorrow. And this is where one final element enters the picture…

Human intuition. The need for human judgment in forecasting, say the experts, is almost gone. They prefer to think of the “educated guess” as the product of a natural bent for statistics, not of some sort of intuitive understanding. There’s a running Art vs. Science battle here as there is in many fields, with, as my host observed, “some of us looking at the computers with doubt, others treating them as gospel.”

“But,” he added, “none of us can ignore them anymore.”

Above: many years later, the magic of painting the world’s precipitation via a mesh of satellites.

Intrigued, I decided to put the system to a test. I turned to David and Walter, and asked: “Will I have a headwind on the way to Hammond tomorrow?”

We walked over to a console where a couple of other workers were poring over detailed maps. “Well, we have a low coming in this way,” someone began, pointing. “It should be right around here by dawn.”

“Yeah, but it’ll probably move into the upper atmosphere by morning,” David observed.

“I don’t know, Dave. The last time this happened it settled right over here and stayed for awhile.” The speaker pointed vaguely at an area just north of us. Discussion went on, with contributions from various experts and machines. The consensus, if one could be said to exist, was that I would be buffeted most of the day by a sidewind from the south.

At about that time, all eyes turned to a standard TV set, mounted in a rack next to a blinking network communications processor. The eleven o’clock news was on, and an impeccably groomed weatherman was gesturing at a colorful US map highlighted with cute graphic symbols for sunshine, rain, and snow.

“Aha!” I couldn’t help but exclaim. “This is where you get your data! All that other stuff is just for show.”

The chuckles were polite. It was an old joke around there.

The TV weathercaster looked at his information and smoothly predicted a headwind. Hmm. “They can draw their own conclusions,” David said. “They receive our maps, but they use their own radar and surface data.”

The bottom line is that weather forecasting is still a mixture of black art and educated guesswork, supported by high-tech tools. But the tools are creations of people who do not yet fully understand the complex system they have set out to model.

And so the sky is full of surprises, like the pleasant tailwind that sped me along the next day to the real start of my five-week Louisiana adventure.

Rural Louisiana. This was it. If the distorted land of my pre-trip fears could be said to have a capital, then it would be here. I carried images of that Southern Comfort movie where evil Cajuns stalked terrified weekend warriors through swamps and picked them off one by one in lawless pleasure. I remembered Easy Rider and the redneck cafe scene; I thought of travelers who had everything stolen… yes, riding a bicycle across Louisiana was akin to suicide.

An old Bulgarian proverb says: “If you wish to drown, do not torture yourself with shallow water.” Why was I putting myself through this?

Of course, this is an old story by now — none of my other fears had proved worthy of the sweat they caused. But just because I was paranoid didn’t necessarily mean that everybody wasn’t after me. I intended to cross Louisiana in five days: Slidell, Hammond, Baton Rouge, Lafayette, Lake Charles, and then <phew> over the border into Texas. The macho cyclists would approve. I had even called distant contacts with arrival dates.

Just outside of Slidell, I met my first Louisiana locals. I walked out of a gas-station restroom (where cringe-inducing graffiti over the urinal read, “Women are like rocks — you skip the flat ones”) and found a few guys standing around waiting for me.

We had the usual bike conversation, then one of them said, “You been eatin’ a lot of red beans? Them red beans blow you all the way to Albuquerque, man! Them Cajuns’ll fix you up.” I promised to give ’em a try, and continued west.

But it was not beans that first awakened my palate to the tastes of Louisiana, it was berries. East of Ponchatoula, I stopped and salivated at a roadside strawberry stand owned by Victor Hoover.

We fell to talking and toured the fields, then a neighbor dropped by and Mrs. Hoover brought out a tray of cake and Cokes. “How’s business?” I asked.

“Well, we just hauled some out to town and they don’t even know if they can sell ’em,” she said.

Victor shook his head. “They ain’t moved a berry in three days. Nobody wants ’em.”

“How could anybody not want strawberries?” I asked. They had given me a pint of perfect fruit, and it was already gone, my fingers sticky and my mouth still tingling with the sweet residual tang.

The neighbor broke in. “California and them is gettin’ three and four hundred thousand trays a day in these chain stores. The people oughta quit patronizin’ them chain stores! Floodin’ the market’s what they’re doin’.”

“The only thing they understand is money,” Victor added.

We went on, discussing life. All subjects led back to strawberries, even the bike. (“You reckon we could pick berries offa one like that?”) It was a lazy afternoon of gentle breezes and twittering birds, but the farmers were far too concerned with the unstable market to discuss pretty days — and I was still trying to figure out how they made a living at this. With a gesture at the roadside stand, I asked, “You get a lot of traffic?”

“It’s local,” Victor answered. “A lot that used to come through here goes by the interstate now.”

As I prepared to go, they told me not to miss the upcoming Ponchatoula Strawberry Festival, just three or four days away. I said it sounded like fun, but that I would be nearing Texas by then. The wind was still at my back, and with warm farewells I returned to the highway early enough to do the dining hall routine at Southeastern Louisiana University.

Or so I thought.