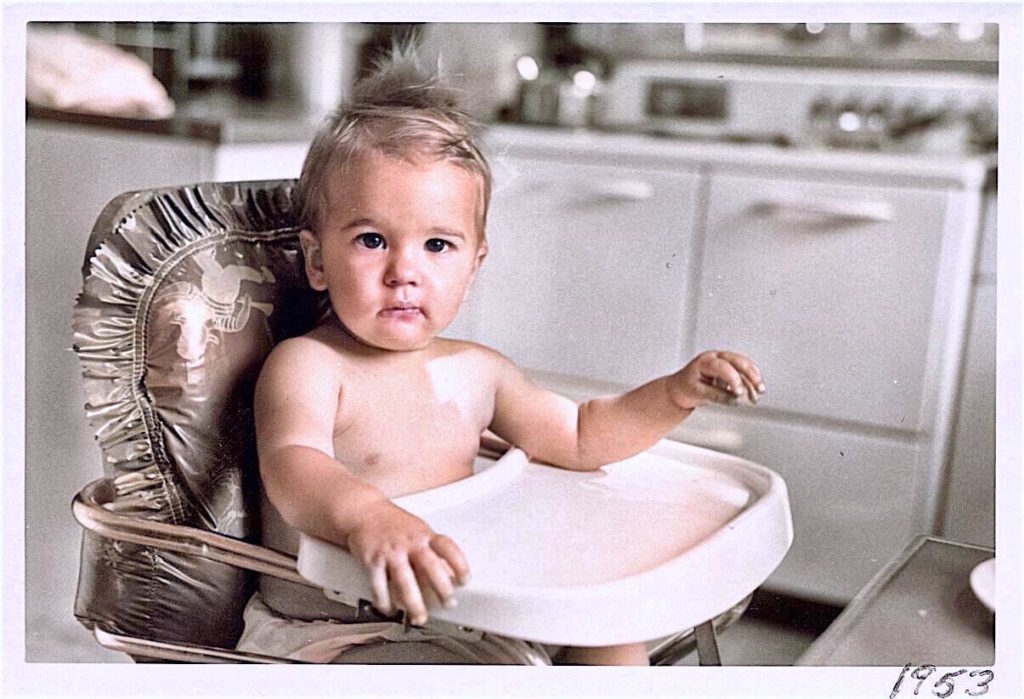 This is a book review of Computing Across America (by Steven K. Roberts, shown in the photo above at age 1), focusing on the author being an adoptee who tracked down and reconnected with his biological parents back in 1980. The reviewer makes some very interesting observations, and this was published in a newsletter of the Concerned United Birthparents community.

Right now, I am sure that all of you are asking, “what the hell is this review doing in ORIGINS???” Let me explain. As some of you know, my husband is a computer wizard, and every year, he attends the Hacker’s Conference, a gathering of similar eccentric computer types in the hills of California. This conference has included Timothy (turn on, tune in, drop out) Leary, musician Todd Rundgren, and the founders of the personal computer industry. It has also included the author of this book, Steven K. Roberts, the High Tech Nomad — who is also an adoptee.

Computing Across America is not an “adoption story” — at least not the kind that we, in the movement, are used to, where adoption is the central theme, but it is the story of an adoptee, one who is not in the movement, but did search on his own and reunite with an extended natural family.

Reading this very entertaining story of the author’s trip across America on a computer-carrying bicycle, you are not even aware that the author is adopted until well into the book, and after the chapter dealing with reunion, the subject is mostly dropped again, at least consciously. Those of us who have dealt with adoptees can see recurrent adoptee themes in Steve’s story — rootlessness, a difficulty with commitment — this boy had at least one girl in every port! — and great loyalty to the adoptive family, even when his actions greatly worried them.

As a mother of a boy also involved in the high-tech world of computers (but much more conservative lifestyle) I was interested to read Steve’s views on search and Its outcome. I found it especially helpful to hear the views of one not involved in any group — because that is what most of us find. Although I would have enjoyed this tale of an eccentric journey even if adoption were never mentioned, the chapter on reunion came as a surprise — one of the best, and spookiest reunion stories I have ever heard — this chapter alone is well worth the price of the book to any birth-mother. I won’t tell you the story here, because I want you all to buy the book — starving authors need to sell books — but I will say that it involved a psychic connection between mother and child that knocked me, a skeptic, off my seat!

Steve also searched for and found his original father, and found many similarities with him and other relatives. Here is how Steve describes that: “… Ron’s career had been one of art and expression, and HIS father was even more like me: turning away from a promising future in aircraft design to seek his fortune in the arts. My bio-grandad lived a life eerily parallel to mine, not only publishing seven books, but making his own long distance odyssey while writing articles and receiving heavy news coverage. His had been a circumnavigation of the Eastern U.S. in a homemade boat.”

On the conclusion of his search, Steve said, “The whole experience confirmed a long-held belief: my life is a blend of hereditary intuition and environmental reason.” It was refreshing for me to see an adoptee so comfortable with the gifts he got from all four of his parents, as we birthparents are so often negated or seen as a source of only “bad blood” by adoptees and others.

When I ordered my book, I had asked Steve some questions about his situation, as I knew that my husband had already shared my story with him. One of the things Steve said was, “I have no regrets at all and feel that any adoptee that doesn’t search is missing a vital link. I’ve learned a lot about why I am as I am — the connections on all sides are deep and intriguing.”

It has been almost ten years since Steve’s reunion, and he has maintained a relationship with both sides of his extended natural family, and with his adoptive family. I am glad to say that Steve has also settled down, and has been with one lady, Maggie, for a number of years. Maggie also sent me an encouraging note concerning my son.

I hope that many of you will order this book and I hope you enjoy it as much as I did.

Steve’s first 10,000 miles of travel yielded his fourth book: Computing Across America. Now you can read about his wild assortment of adventures, including a strange encounter with convicts in the Maryland woods, four months’ internment in San Clemente’s Casa de Ha-Ha, exploration of a Colorado ice cave, the ultimate blind date in Key West, and all sorts of romances and bizarre encounters across the land.