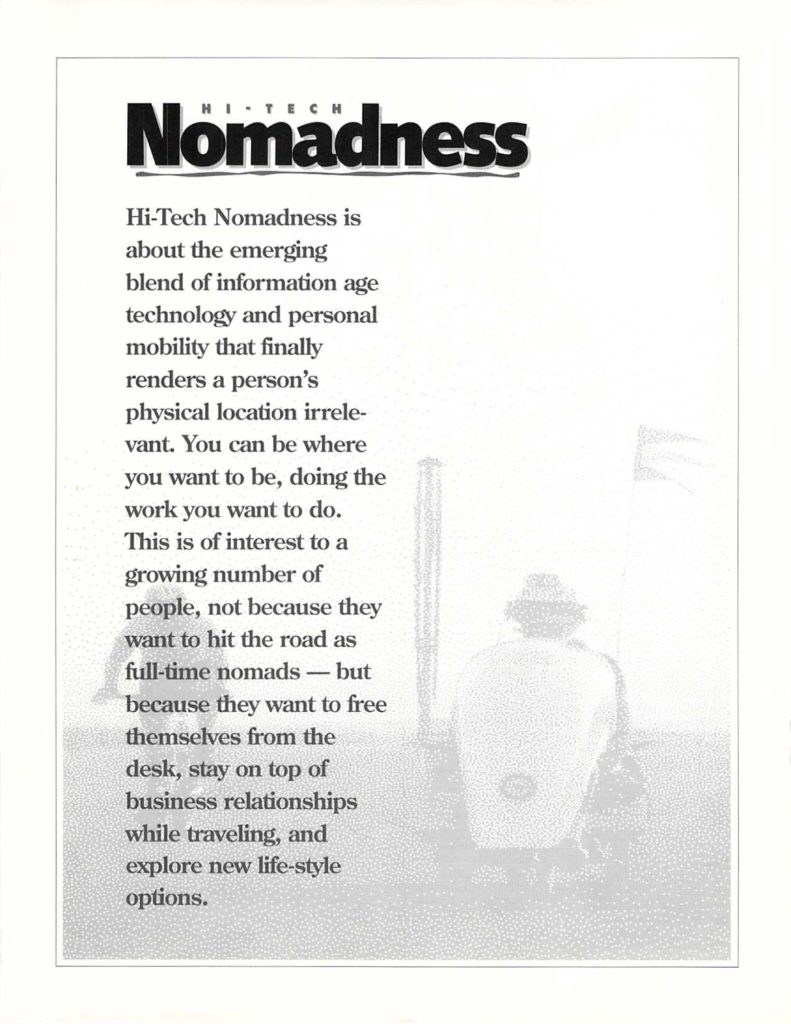 From 1987-1992, I published 12 issues of an on-the-road ‘zine. This began as the Journal of High Treknowledgy, and then grew into the more substantial Journal of High-Tech Nomadness. The absolute pinnacle of this series of publications was Issue #11, produced by Doug Brightwell at his home office in Cupertino… and the magazine itself became newsworthy because the editorial content was coming from someone who was a full-time nomad, using mobile computing tools. In 1992, this was yet exotic…

One of my great regrets about this epoch was wimping out when it got serious, with actual publishing deadlines. I was starting to obsess about the upcoming Microship project while on a full-time media and speaking tour with BEHEMOTH, and in late 1992 I told Doug I wouldn’t be able to keep it up. Of course, that was terrible timing… the public was growing ever more fascinated with nomadic connectivity, and we were even on a few newsstands in major markets (including Tower Books). But by mid-1993 I was working full-time on the Microship project in a lab hosted by UCSD, with teams of students… so it would have been a challenge.

During the height of the Journal epoch, we put together a little marketing piece complete with an advertising rate card… and I found the lone copy in my archives 28 years later. Here it is, with the text OCR’d for Googlability and easier reading…

Hi-Tech Nomadness is about the emerging blend of information age technology and personal mobility that finally renders a person’s physical location irrelevant. You can be where you want to be, doing the work you want to do. This is of interest to a growing number of people, not because they want to hit the road as full-time nomads — but because they want to free themselves from the desk, stay on top of business relationships while traveling, and explore new life-style options.

Hi-Tech Nomadness isn’t just documenting an emerging cultural phenomenon. It is pioneering a new way of life by exploring a leading edge technology-based lifestyle that no other publication covers in such detail and with such authority.

Founding editor Steven K. Roberts invented and popularized the concept of “hi-tech nomadness” — a lifestyle which allows people more freedom in their lives, is made possible by information age technologies, and is rooted in a philosophy that life should be the fulfillment of one’s passions.

In 1983, Steve was struck by an obsession. Rather than working in an office during the week and pursuing his personal passions only on weekends, he quit his job, abandoned his Midwest suburban existence, and headed out across America on a computerized recumbent bicycle. For eight years he pedaled more than 17,000 miles around the United States, making his home in the information networks he calls Dataspace, living a life of pure adventure while writing books, publishing his Journal, and refining the tools and technology that made his way of life possible.

That way of life has inspired thousands of people who are seeking a greater amount of personal freedom. They look to Hi-Tech Nomadness to provide a blueprint to help them expand their own lifestyle options.

There’s a new breed of hi-tech consumer emerging in the marketplace, and no other magazine addresses their special set of interests as comprehensively as Hi-Tech Nomadness.

They’re interested in travel, the outdoors, bicycling, kayaking, hiking and camping. They’re intrigued with human-powered vehicles, and gravitate toward any technology that offers greater personal self-sufficiency. They’re passionate about a wide range of personal electronic devices and information-age tools that enhance their ability to live, work and play anywhere they choose — such as computer networking, ham radio, satellite communications, and solar power.

Our readers are an adventurous lot, roaming the globe as well as the global networks. For example, you might find them bicycling across Pakistan with a laptop computer, or modeming medical data back from the Himalayas, checking their location with a hand held GPS unit as they hitchhike across Wyoming, recharging their ham radio with a portable solar panel as they kayak down the Mississippi River… or simply checking their E-mail from a roadside payphone before driving on to next town.

Hi-Tech Nomads are explorers alright, but they explore more than just the physical world. They trek far ahead of the average person into the emerging landscapes of technology, ecology, and personal growth.

Hi-Tech Nomadness readers are smart, highly educated, and computer literate. Most have jobs in the computer, information and communications industries, and many have post graduate degrees. In their approach to life, they embody the spirit of inventors, designers, and do-it-yourselfers. They prefer products that push the edge of the envelop when it comes to design efficiency — products that are lighter, smaller, more powerful, consume less energy, store in smaller spaces, and are environmentally sound.

As a group, Hi-Tech Nomads are young, and young at heart. Their average age is late twenties to mid thirties. And, they have a high level of disposable income, typically earning over $60,000 a year.

Since the completion of BEHEMOTH, a $1.2 million, 105-speed recumbent bicycle, loaded to the gills with computers and electronic gear, people all over the country have been hearing about Steve Roberts and Hi-Tech Nomadness. A recent appearance on the Phil Donahue Show and front page article in the Wall Street Journal increased his public visibility dramatically. (See sidebar for other recent media coverage.)

Hi-Tech Nomadness is a young publication, but sales growth indicates a steadily increasing demand for the information it offers. The last issue sold out completely, and our current circulation is 1,500. About 33% of the copies go to subscribers, and the remaining 67% are sold on newsstands. Our circulation is expected to almost double with the next issue.

The majority of our subscribers are located in the metropolitan centers and hi-tech enclaves on the West and East Coasts — Boston, New York, Washington, Atlanta, Seattle, San Francisco, Silicon Valley, and Los Angeles. The rest are scattered pretty evenly around the Midwest and Southwest.

Posted in Nomadness Reports
← BEHEMOTH in ConneXionsWhat is the Frequency – Newsweek →