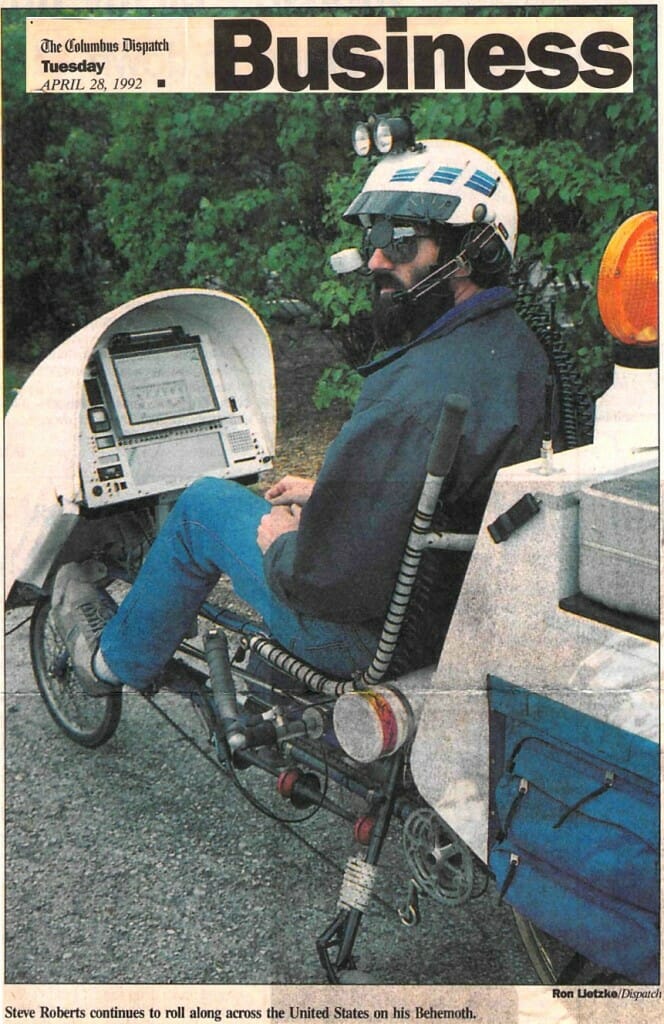 It was bizarre to revisit Columbus, the city that inspired my long-distance travel, after over 8 years of adventure. The four years that I had spent as a homeowner in the suburb of Dublin were but a distant featureless blur in my memory… dotted by moments of love and technopassion, to be sure, but somehow reflecting the sameness of this part of the world. Still, every now and then… drawn by old friends, company visits, or just the route of I-70… I would pop back into town for a brief and surreal glimpse of where I might have been had not a strange epiphany changed my life in 1983. Unimaginable, really…

What Steve Roberts enjoys most in life is pedaling along and doing his job, but fame is fast catching up with the former Dublin resident who makes his living writing, talking and consulting about computer technology.

It wouldn’t seem that such a person would attract much media attention. But then, most freelance consultants don’t work on a 580-pound recumbent bike loaded with 1.2 million worth of the latest computer and telecommunications equipment.

Roberts, who strives to dissolve barriers between work and play, is scheduled to appear soon on ABC’s Good Morning America, Donahue and in People magazine. He was featured last week in The Wall Street Journal.

So, this technological free spirit laments that his life is a little tied up for the next month.

“I can have my cake and eat it, too,” said Roberts, an avid cyclist. “The technology allows me to connect to the world.”

Roberts was in Columbus yesterday to add more gear to the bike, called Behemoth (Big Electronic Human-Energized Machine … Only Too Heavy) — a virtual office on wheels that enables him to communicate with clients and pen a high-tech journal, Nomadness, while pedaling through the countryside at 9 mph.

Technicians at Columbus-based Morning Star Technologies Inc. were helping add a communications device that will enable Roberts to do multiple computer tasks over telecommunications links as if in a sophisticated office network.

Nearly all the electronics on Behemoth are supplied by manufacturers who view Roberts as pushing technology to the limit. It has taken 45 volunteers and equipment from 150 sponsors to make Behemoth what it is today.

“This has never been intended as a publicity stunt, but the best solution to the problem,” he said about melding man with machine. “Industry sees me as a caricature of rolling technology.”

Roberts, who also has published several books and does speaking engagements, calls himself a hobbyist

“The perception is that a lot of these tools have terrible complexity,” he said. “In reality, they can be very liberating. This gives me a lot of freedom. If I want to be on the bike, I can be productive.”

In addition to showing that sophisticated computer technology can be liberating, Roberts said his message also involves the dream of doing what one really wants to do.

And he vows that all the recent publicity is not likely to take away from his lifestyle or the messages. “So far it’s been OK,” he said, “because the bike is famous, not me.”

Posted in Media - BEHEMOTH and tagged Columbus Dispatch
← A Restless Loner on a Custom Bike: It’s HAL on Wheels – Wall Street JournalUpdate from a Kentucky Rainstorm →