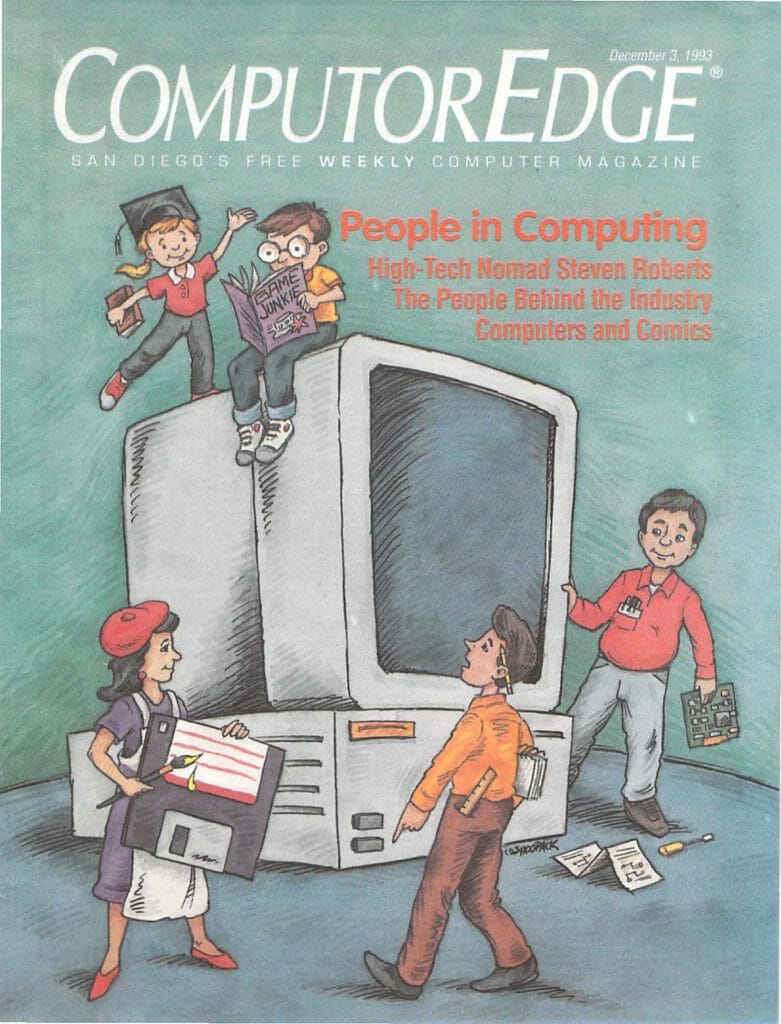 The Microship project had just landed at UCSD, hosted by the Electronics and Control Engineering department. This little piece in the local San Diego computer weekly was part of a flurry of publicity that happened once I got the lab set up and had begun working with student projects, something that continued for almost 2 years. At this point, the Microship had not yet taken its eventual form; in my lab was a massive actual-size cardboard mockup of a 30-foot center hull, and I thought I’d be using kayaks as detachable outriggers. While that learning curve was slowly unfolding, I had begun building a network of FORTH nodes that would handle all the distributed systems around the boat, and you can see the architecture in the Microship Project Catalog that I distributed to interested engineering students.

He’s been on Donahue, been featured in dozens of national magazines, and written a book on his adventures. Now he’s in San Diego, working on his next groundbreaking computer project.

Steven K. Roberts is the ultimate high-tech nomad, a Bedouin for the ’90s. Instead of a camel or pack horse, the self-educated Roberts (he dropped out of the Rose Hulman Institute of Technology in his freshman year) relies on a $1.2 million bicycle outfitted with more computer equipment than most computer stores.

And in the latest chapter in Roberts’ fascinating life story, he’s taking his quest for the perfect nomadic vehicle afloat: Roberts is working at UCSD on a computerized trimaran, the Microship.

As envisioned by Roberts, the Microship (short for Sea Moss Microship, what Roberts calls a “bad computer pun”) will be a seagoing vessel with the same telecommunications and computing capabilities as a land-based laboratory. More impressive is that the craft is planned to be entirely self-sufficient, from the solar panels to generate the power for all on-board equipment, to the telecommunications equipment to keep the crew in nonstop contact with the rest of the world, to the detachable wheels and trailer hitch for those occasions when the Microship comes ashore.

While the Microship is still in its early planning stages — Roberts is planning for sea trials in 1995 — his track record with the BEHEMOTH bicycle suggests there is tittle doubt that the project will be successful.

BEHEMOTH (Big Electronic Human-Energized Machine… Only Too Heavy) started out life as the Winnebiko in 1983. Throughout the three incarnations of the bike, Roberts has used the same chassis. That chassis is built around a custom-made recumbent seat frame and three-derailleur 105-speed gearing.

For those not familiar with recumbent bicycles, the concept is that the rider sits upright in a mesh beach-style chair with his or her legs extending horizontally to pedals just behind the front wheel. The handlebars are to either side of the seat, at waist level. This gives full back and leg support, providing greater comfort for long-distance bike riding. It looks and sounds strange, but Roberts has logged more than 12,000 miles on the road — obviously, it works.

Winnebiko II was built in 1986 with a Tandy Model 100; BEHEMOTH was begun in 1989 and, when finished in 1991, was built around a Macintosh portable computer. The computers are contained in a cardboard-and-fiberglass fairing over the front wheel. The fairing not only houses the computers, but provides a wind break for the rider. In each of his three versions of the bike (the entire fairing can be removed from the frame, and the Winnebiko II computer setup is now in Roberts’ UCSD lab), the computer is removed from its original case and remounted into the fairing. On the BEHEMOTH, the fairing can be unfolded like the engine cowling on a World War II fighter, so that each component can easily be worked on.

In addition to the Mac portable in the BEHEMOTH fairing, there are another Mac, two DOS machines (a ‘286 and an XT) and a Motorola 68HCII 8-bit processor to run Roberts’ self-designed net. There is also a Sun SparcStation in a case behind the seat to run JPEG graphics compression and CAD software. Each of the computers — plus cellular telephone (with 9,600-bps modem), satellite hook-up and ham radio — are nodes on the BEHEMOTH net, and all can be accessed by Roberts while he’s pedaling.

The Mac is accessed via a screen on the dashboard of the fairing, like the radar screen of a jet fighter. Infrared sensors built into Roberts’ bicycle helmet control the Mac mouse cursor for hands-free control, and he has a unique set of control keys built into the handlebar handles that allow him to enter text.

The DOS machines are accessed via a 1-inch-by-1-inch heads-up display built into Roberts’ helmet and the handlebar controls.

Thus, with the above setup, Roberts can, while tooling through the Rockies, send and receive E-mail through the Internet, check his bills, write poetry, play games or anything else you or I do on our computers at home. One of the more ingenious applications on Roberts’ computer net is what he calls his “Couch Circuit Management System” — a program that uses the satellite feed to determine Roberts’ present latitude and longitude, and then gives him a list of phone numbers of friends within 25 miles so he can find a place to sleep for the night while on the road.

Power for the BEHEMOTH comes from solar panels on top of the SparcStation box and on top of the trailer the bike tows. The solar panels can generate up to 72 watts of power, and batteries allow Roberts to store surplus energy for use later.

Plus, each device on the net is fitted with an electronic power switch, so they only receive power from the system when they are actually being used.

The final component of the computerized bike is the security system run by the net. With motion detectors, the computer system can tell if the bike is being moved and, if Roberts’ password hasn’t been entered, the computers will automatically call authorities over either the cellular telephone, the ham radio, or the satellite hookup. Roberts reports that no one has ever tried to steal the BEHEMOTH, but several times the bike has summoned him via his pager when people have tried to sit on it out of curiosity.

But BEHEMOTH is in retirement now, with Roberts’ attention turned toward the Microship. His latest project promises to extend the boundaries of fully independent nomadicism to a new level.

Microship will have a 30-foot main hull, with two 2-man kayaks serving as outboards on the trimaran craft. Power will be supplied by retractable solar panels that will be deployed between the hull and the two outboards, for a total area of 80 square feet. This array should generate more than 700 watts of power, Roberts said, more than 10 times that of BEHEMOTH.

The heart of the Microship will be a pressurized computer center in the main hull. Roberts said the pressurized compartment is necessary to keep the corrosive salt air away from the electronic components.

At the cockpit at the rear of the main hull, the pilot will have two monitors available, one for the main Macintosh and the other for a series of DOS machines. All the computers will be accessible by one keyboard in a watertight container.

Propulsion for the Microship will come from two sails, with a back-up motor driven by the solar panels. There will also be pedal-driven propellers in the kayaks, to provide human propulsion when needed. Also, the kayaks will be detachable, allowing for exploration.

In addition, Microship will carry a series of electronic environmental monitors, which will transmit data on temperature, water currents, salinity, depth, and more, to schools around the country via the Internet as part of a National Science Foundation project. Once Microship is afloat, Roberts hopes to visit classrooms as he travels, as he did with the bicycle.

So, what’s the point of all this? Is Roberts going to market these ideas? There is no immediate practical application, and Roberts said he releases most of his developments to the public domain. As with BEHEMOTH, Roberts is seeking volunteers, grants and donations for Microship, which will be a one-of-a-kind craft.

But there will doubtless be spin-off technologies from this, eventually appearing in the marketplace in commercial forms that will make all our lives more convenient.