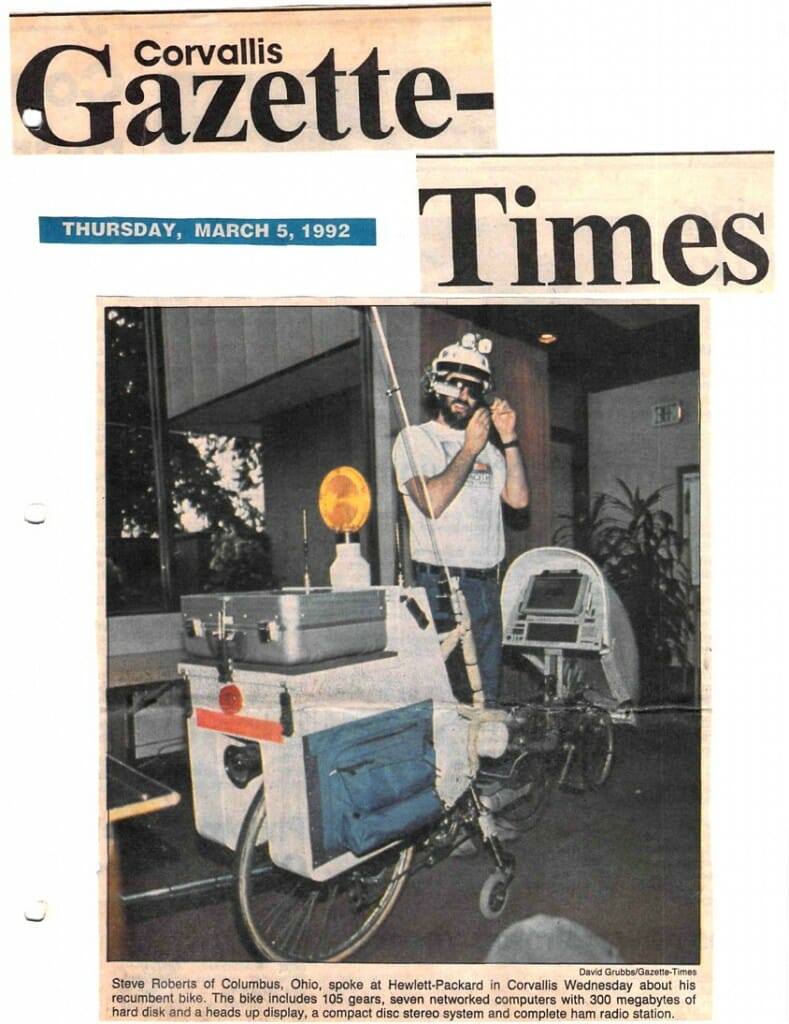 One of my favorite sponsors during the whole bike epoch was Hewlett-Packard… beginning with the exquisite Portable and Portable PLUS computers during the Winnebiko and Winnebiko II adventures, then continuing with calculators, high-brightness LEDs, and test equipment in later years. Corvallis was thus always one of my favorite places to visit, and not just because of H-P… it’s also a sweet town. This article catches me passing through with BEHEMOTH in the mothership, somewhere in between the final pedaling adventure and the start of the Microship project. The Gazette-Times also covered us when passing through Corvallis in 1986.

Ever tire of being in the same place year after year?

Ever get struck by a yearning to drop everything, pull up roots and get away from it all?

Eight years ago, after being struck by such an urge, Steven Roberts did just that. He hit the road to become a high-tech nomad.

Roberts shared his adventures with about 100 people Wednesday in the McFadden Room at Hewlett-Packard Co.

In 1983, Roberts said, he was working at a job he didn’t like for a suburban dream he didn’t want. So he made a list of his passions, which included writing and computer networking. Then he looked for a way to put them together.

He fashioned a high-tech bicycle, sort of bicycle-meets-computer, and started a cross-country trek.

Since then he has pedaled his high-tech bicycles 16,000 miles. Out of the first 10,000 miles came a book called Computing Across America, Roberts’ very different travelogue.

Roberts’ current version of the high-tech bicycle is called BEHEMOTH, an acronym for Big Electronic Human-Energized Machine (Only Too Heavy).

BEHEMOTH, featured in the August 1991 issue of Bicycling, is the third in a series of high-tech bicycles that have been built on the same recumbent (“lying down”) bicycle frame.

Roberts jokingly refers to the first two as Winnebiko I and II.

Though the bike frame is similar to those of recumbent bicycles occasionally seen plying the bikeways in Corvallis, the similarity ends there. A notable difference is the price tag: according to Roberts, the current value of BEHEMOTH is more than $1 million.

Fortunately for Roberts, he has 150 industry sponsors to support him.

“I didn’t get this at the local Schwinn shop,” he said.

It’s also unlikely that any bike shop would stock most of the components for Roberts’ bicycle. The 580-pound vehicle sports seven on-board networked computers, a satellite uplink and downlink, a CD stereo system, a six-level alarm system, and “training wheels” that swing into place with the push of a button. The training wheels provide stability when going up steep inclines.

BEHEMOTH’S handlebars and cable-connected helmet help Roberts “interface” with the bike’s computers. Buttons on the handlebars act as a keyboard that enables him to operate the solar-powered computers and communicate on a global computer network while pedaling down the highway. The helmet, with top-mounted headlights, mirror, speakers, microphone, motion sensors, and a fully functional, 1-inch-square computer monitor, makes Roberts look like a creature from a science-fiction movie.

Roberts said he couldn’t resist the temptation to capitalize on that perception once when ordering from a Taco Bell drive-though window: “Give me a burrito,” he ordered the server in a monotone, computer-like voice. “Resistance is useless.”

While traveling, Roberts uses the on-board computers to write free-lance articles, design new systems for BEHEMOTH, and work on what is probably the only magazine edited on a computerized bicycle, the Journal of High-tech Nomadness.

Roberts said he’s about ready to get back on the road again, but 10,000-mile trips are probably things of the past for him. A thousand miles is more like it.

Because computer networking allows Roberts to be virtually anywhere he wants, it is no longer important whether, he travels 10 miles per day or not at all.

“It doesn’t matter where I am anymore, so there’s no point in getting there,” he said.