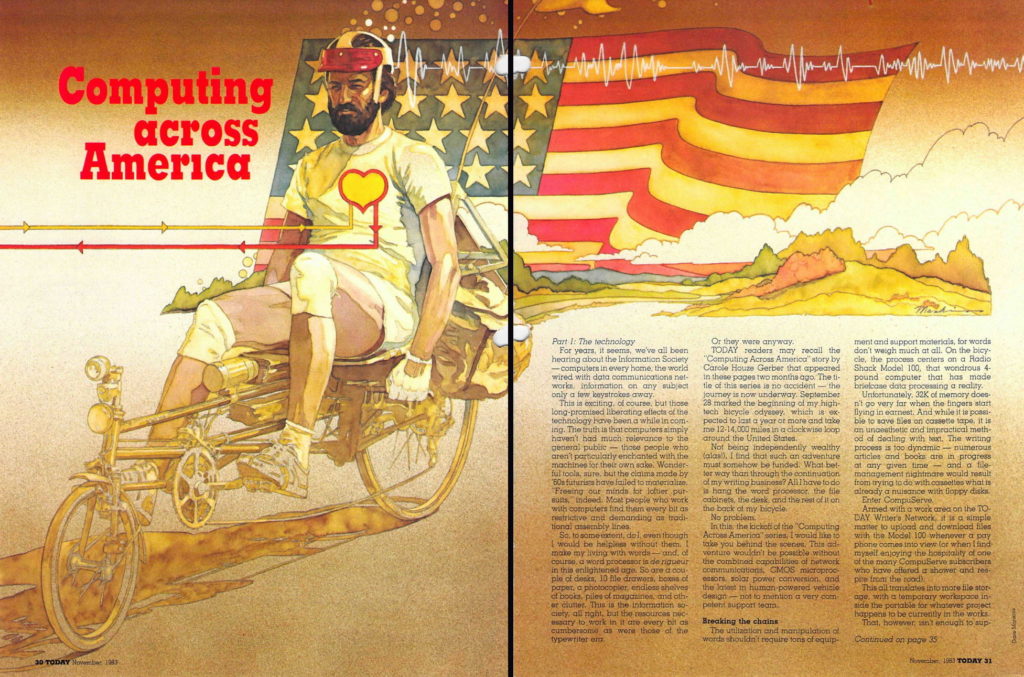 This was the first of a monthly series that ran in CompuServe’s Online Today magazine from November 1983 until July 1985 (20 chapters). These were written during my first 10,000 miles, and were more refined versions of some of the updates published in real time on the system in the Computing Across America database (GO CAA).  My CB handle was Wordy, and my CompuServe user ID was 70007,362.

This eventually became the title of my book about the adventure, the full text of which begins here.

CompuServe was absolutely central to my travels, and the magazine column helped fund the adventure along with more random freelancing. Online Today was ahead of its time, and had an excellent stable of writers covering this radical new beat. I was also writing feature-length pieces about the online information retrieval world and other emerging technologies.

For years, it seems, we’ve all been hearing about the Information Society — computers in every home, the world wired with data communications networks, information on any subject only a few keystrokes away.

This is exciting, of course, but those long-promised liberating effects of the technology have been a while in coming. The truth is that computers simply haven’t had much relevance to the general public — those people who aren’t particularly enchanted with the machines for their own sake. Wonderful tools, sure, but the claims made by ’60s futurists have failed to materialize. “Freeing our minds for loftier pursuits,” indeed. Most people who work with computers find them every bit as restrictive and demanding as traditional assembly lines.

So, to some extent, do I, even though I would be helpless without them. I make my living with words — and, of course, a word processor is de rigueur in this enlightened age. So are a couple of desks, 10 file drawers, boxes of paper, a photocopier, endless shelves of books, piles of magazines, and other clutter. This is the information society, all right, but the resources necessary to work in it are every bit as cumbersome as were those of the typewriter era.

Or they were anyway.

TODAY readers may recall the “Computing Across America” story by Carole Houze Gerber that appeared in these pages two months ago. The title of this series is no accident — the journey is now underway. September 28 marked the beginning of my high-tech bicycle odyssey, which is expected to last a year or more and take me 12-14,000 miles in a clockwise loop around the United States.

Not being independently wealthy (alas!), I find that such an adventure must somehow be funded. What better way than through the continuation of my writing business? All I have to do is hang the word processor, the file cabinets, the desk, and the rest of it on the back of my bicycle.

In this, the kickoff of the “Computing Across America” series, I would like to take you behind the scenes. This adventure wouldn’t be possible without the combined capabilities of network communications, CMOS microprocessors, solar power conversion, and the latest in human-powered vehicle design — not to mention a very competent support team.

The utilization and manipulation of words shouldn’t require tons of equipment and support materials, for words don’t weigh much at all. On the bicycle, the process centers on a Radio Shack Model 100, that wondrous 4-pound computer that has made briefcase data processing a reality.

Unfortunately, 32K of memory doesn’t go very far when the fingers start flying in earnest. And while it is possible to save files on cassette tape, it is an unaesthetic and impractical method of dealing with text. The writing process is too dynamic — numerous articles and books are in progress at any given time — and a file-management nightmare would result from trying to do with cassettes what is already a nuisance with floppy disks.

Armed with a work area on the TODAY Writer’s Network, it is a simple matter to upload and download files with the Model 100 whenever a pay phone comes into view (or when I find myself enjoying the hospitality of one of the many CompuServe subscribers who have offered a shower and respite from the road).

This all translates into more file storage, with a temporary workspace inside the portable for whatever project happens to be currently in the works.

That, however, isn’t enough to support all the needs of a writing profession. So the file’s on disk in Ohio. Now what?

Uniface (my “universe interface”) is otherwise known as Kacy. Kacy downloads and edits the articles that seem to magically appear on the CompuServe network. She also handles correspondence, manages the money, schedules projects, throws away junk mail, and generally acts as a link between me and the rest of the world. But this not-insubstantial task also involves a lot of computing power.

The third player in this high-tech comedy is BEHEMOTH, my computer system. It is not particularly unusual as computers go, being a Multibus-based CP/M machine, but it is dependable. Uniface puts it to work as the last link in the electronic pathway my text follows to get from a bicycle-borne computer to a printed manuscript. From that point, the article or chapter can be conventionally mailed — or if the publisher is plugged into the information age, as TODAY is, it can be telecommunicated directly to their typesetter.

The net effect of all this is the elimination of the traditional trappings of an office.

This has a sublimely liberating effect, breaking the chains that have bound me to my desk. That’s the idea anyway. As this series progresses, I’ll let you know how well it works. And now — back to the road!