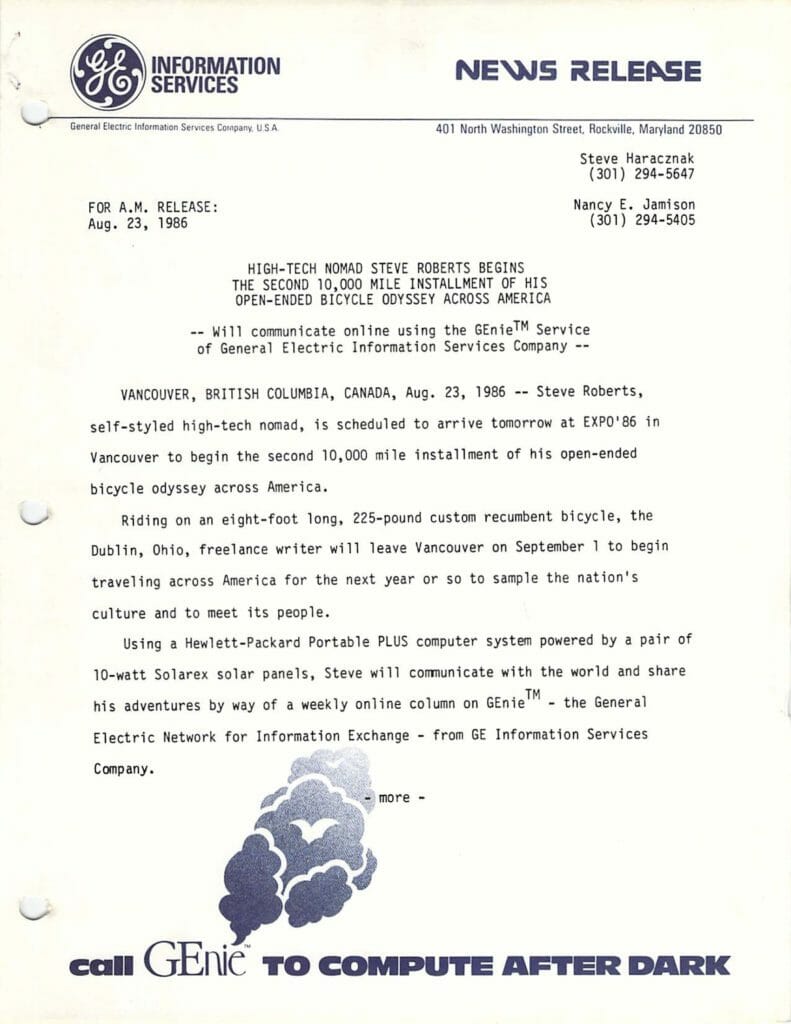 Between the first 10,000-mile journey aboard the Winnebiko and the 6,000 with the Winnebiko II, I moved my network operations from CompuServe to GEnie. This press release was the first public exposure of that fact, and came as we arrived at Expo ’86 in Vancouver to display the bike before heading down the Pacific Coast. Over the next couple of years, I published a column online, visited GEnie in Rockville, and did the West Coast Computer Faire with the company…

Steve Roberts, self-styled high-tech nomad, is scheduled to arrive tomorrow at EXPO ’86 in Vancouver to begin the second 10,000 mile installment of his open-ended bicycle odyssey across America.

Riding on an eight-foot long, 225-pound custom recumbent bicycle, the Dublin, Ohio, freelance writer will leave Vancouver on September 1 to begin traveling across America for the next year or so to sample the nation’s culture and to meet its people.

Using a Hewlett-Packard Portable PLUS computer system powered by a pair of 10-watt Solarex solar panels, Steve will communicate with the world and share his adventures by way of a weekly online column on GEnie — the General Electric Network for Information Exchange — from GE Information Services Company.

“The computer is my link with the universe — I very seldom use the telephone for voice messages. A portable computer and a powerful online network like GEnie provide all the communications I need,” said Roberts.

Steve’s bicycle odyssey is planned to take him through approximately 30 states: from Vancouver down the West Coast of the United States, across the Southwest, up through the Rockies, across the Great Lakes area, through New England, and down the East Coast.

He welcomes personal computer enthusiasts to communicate with him online via GEnie anytime during his bicycle odyssey (his GE Mail address is WORDY). He welcomes responses to his column, story suggestions, and invitations for what he calls his “hospitality database.”

“With over 19,000 GEnie subscribers currently on the network, I am sure that Steve Roberts will not be lonely, at least online, while on his second bicycle odyssey,” said Bill Louden, general manager of GEnie for GE Information Services. “I encourage GEnie subscribers to keep up-to-date with Steve’s adventures by reading his weekly “Computing Across America” column on GEnie,” he said. “I’m sure we are all envious of Steve, and we all wish him good luck, good weather and good road ahead.”

Steve’s first journey around the country began in September 1983 when he sold his home in Midwestern suburbia and moved to a computerized recumbent bicycle bedecked with solar panels and “enough high-tech gizmology to start a science museum.” For the next 18-months he traveled 9,760 miles across America on his Winnebiko, probing the potential of life online and “finding brilliance in the oddest of places.” The resulting book, Computing Across America: The Bicycle Odyssey of a High-Tech Nomad, will be published this fall.

Now almost a year and a half later, Steve Roberts is beginning his second journey. Riding a re-designed recumbent bicycle called the Winnebiko II, which has five on-board computers, Steve is all set to spend the next year or two “prowling neighborhoods both electronic and physical, pausing for months at a time to explore and touch the magic.”

Personal computer users can follow Steve’s adventures by signing up for GEnie from their own keyboard by calling 1-800-638-8369. Prior to calling, set your modem for half duplex (300 or 1200 baud) and be ready with your VISA, MasterCard or personal checking account number. Upon connection enter HHH and press Return. At the U#= prompt enter XJM11999,GEnie and press Return. You will then be led through an electronic sign-up procedure. For additional information or assistance in signing up for the GEnie Service, please call 1-800-638-9636, ext. 21.

GEnie is available for only $5/hour for non-prime time access at either 300 or 1200 baud. The non-prime time rate applies to use Monday thru Friday from 6 p.m. to 8 a.m. local time, and all day on Saturday and Sunday and national holidays. There are no monthly charges on GEnie and the sign-up fee is only $18.

GE Information Services Company, a division of General Electric Company, has its headquarters in Rockville, Md.