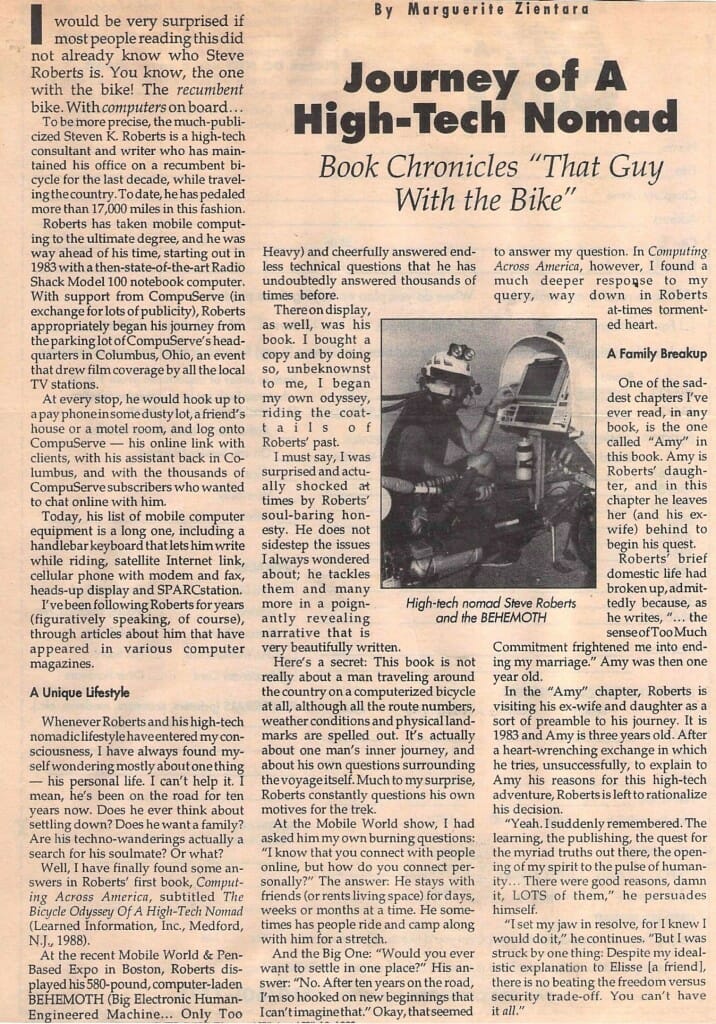 This is one of the most touching and insightful reviews of my Computing Across America book, and the author looks past the obvious technomadic content and focuses on the more challenging human issues… matters of the heart, cast into bas relief by a life on the road. As I work on the new book — incorporating this whole tale as well as the various sequels, private maunderings, tech interludes, and wild imaginings — this review will remind me to avoid the temptation to push personal matters into the background, artificially becoming one of those larger-than-life noble adventurers that seem to populate so many travelogues. These are the things that matter more than the toolset, though of course the tools make the expeditions possible. It’s a fine line, and I am grateful to Marguerite for highlighting this.

Book Chronicles
“That Guy with the Bike”

I would be very surprised if most people reading this did not already know who Steve Roberts is. You know, the one with the bike! The recumbent bike. With computers on board…

To be more precise, the much-publicized Steven K. Roberts is a high-tech consultant and writer who has maintained his office on a recumbent bicycle for the last decade, while traveling the country. To date, he has pedaled more than 17,000 miles in this fashion.

Roberts has taken mobile computing to the ultimate degree, and he was way ahead of his time, starting out in 1983 with a then-state-of-the-art Radio Shack Model 100 notebook computer. With support from CompuServe (in exchange for lots of publicity), Roberts appropriately began his journey from the parking lot of CompuServe’s headquarters in Columbus, Ohio, an event that drew film coverage by all the local TV stations.

At every stop, he would hook up to a pay phone in some dusty lot, a friend’s house or a motel room, and log onto CompuServe — his online link with clients, with his assistant back in Columbus, and with the thousands of CompuServe subscribers who wanted to chat online with him.

Today, his list of mobile computer equipment is a long one, including a handlebar keyboard that lets him write while riding, satellite Internet link, cellular phone with modem and fax, heads-up display and SPARCstation.

I’ve been following Roberts for years (figuratively speaking, of course), through articles about him that have appeared in various computer magazines.

Whenever Roberts and his high-tech nomadic lifestyle have entered my consciousness, I have always found myself wondering mostly about one thing — his personal life. I can’t help it. I mean, he’s been on the road for ten years now. Does he ever think about settling down? Does he want a family? Are his techno-wanderings actually a search for his soulmate? Or what?

Well, I have finally found some answers in Roberts’ first book, Computing Across America, subtitled The Bicycle Odyssey Of A High-Tech Nomad.

At the recent Mobile World & Pen-Based Expo in Boston, Roberts displayed his 580-pound, computer-laden BEHEMOTH (Big Electronic Human-Energized Machine… Only Too Heavy) and cheerfully answered endless technical questions that he has undoubtedly answered thousands of times before.

There on display, as well, was his book. I bought a copy and by doing so, unbeknownst to me, I began my own odyssey, riding the coattails of Roberts’ past.

I must say, I was surprised and actually shocked at times by Roberts’ soul-baring honesty. He does not sidestep the issues I always wondered about; he tackles them and many more in a poignantly revealing narrative that is very beautifully written.

Here’s a secret: This book is not really about a man traveling around the country on a computerized bicycle at all, although all the route numbers, weather conditions and physical landmarks are spelled out. It’s actually about one man’s inner journey, and about his own questions surrounding the voyage itself. Much to my surprise, Roberts constantly questions his own motives for the trek.

At the Mobile World show, I had asked him my own burning questions: “I know that you connect with people online, but how do you connect personally?” The answer: He stays with friends (or rents living space) for days, weeks or months at a time. He sometimes has people ride and camp along with him for a stretch.

And the Big One: “Would you ever want to settle in one place?” His answer: “No. After ten years on the road, I’m so hooked on new beginnings that I can’t imagine that.” Okay, that seemed to answer my question. In Computing Across America, however, I found a much deeper response to my query, way down in Roberts at-times tormented heart.

One of the saddest chapters I’ve ever read, in any book, is the one called “Amy” in this book. Amy is Roberts’ daughter, and in this chapter he leaves her (and his ex-wife) behind to begin his quest.

Roberts’ brief domestic life had broken up, admittedly because, as he writes, “… the sense of Too Much Commitment frightened me into ending my marriage.” Amy was then one year old.

In the “Amy” chapter, Roberts is visiting his ex-wife and daughter as a sort of preamble to his journey. It is 1983 and Amy is three years old. After a heart-wrenching exchange in which he tries, unsuccessfully, to explain to Amy his reasons for this high-tech adventure, Roberts is left to rationalize his decision.

“Yeah. I suddenly remembered. The learning, the publishing, the quest for the myriad truths out there, the opening of my spirit to the pulse of humanity… There were good reasons, damn it, LOTS of them,” he persuades himself.

“I set my jaw in resolve, for I knew I would do it,” he continues. “But I was struck by one thing: Despite my idealistic explanation to Elisse [a friend], there is no beating the freedom versus security trade-off. You can’t have it all.”

So, Roberts chose adventure. Amy’s, it turns out, is just one of the many hearts Roberts has broken while Computing Across America — and technology made it all possible! His “Winnebiko” serves as an irresistible draw to beauties of all kinds, and in Computing Across America Roberts never seems to tire of exploring the possibilities with yet another “new friend.”

It makes for interesting reading, I admit, even as I found myself thinking “oh no” to myself. And, despite some feelings of dismay, I realize Roberts was living out the fantasies of many men — and women.

I say “was” because Roberts did finally settle down (after a fashion) after writing this book. True to his imagination and creative style, he managed to settle down while staying on the road, by convincing a female companion to accompany him. A floppy-disk-based “book” called Miles With Maggie (which I have yet to read) tells that story.

To be fair, there’s a lot more to Computing Across America than just amorous conquests, although there are enough of them to keep one’s attention. You-are-there descriptions of the physical challenges of climbing 11,000-foot peaks in Colorado on a bicycle, for example, are simply astonishing.

Roberts has such a gift for detailed description — without being boring — that I felt that I, not Roberts, rode past all human endurance, while sick, to reach Las Vegas in time for a scheduled appearance at COMDEX.

Computing Across America also recounts many intriguing encounters with scary characters and imparts the sheer beauty — and tedium — of the land, all brilliantly described. Underlying it all is a philosophy of life reached gradually, mile by mile.

This is a wonderful book, fascinating, insightful and honest from both a technical and human standpoint… very human.