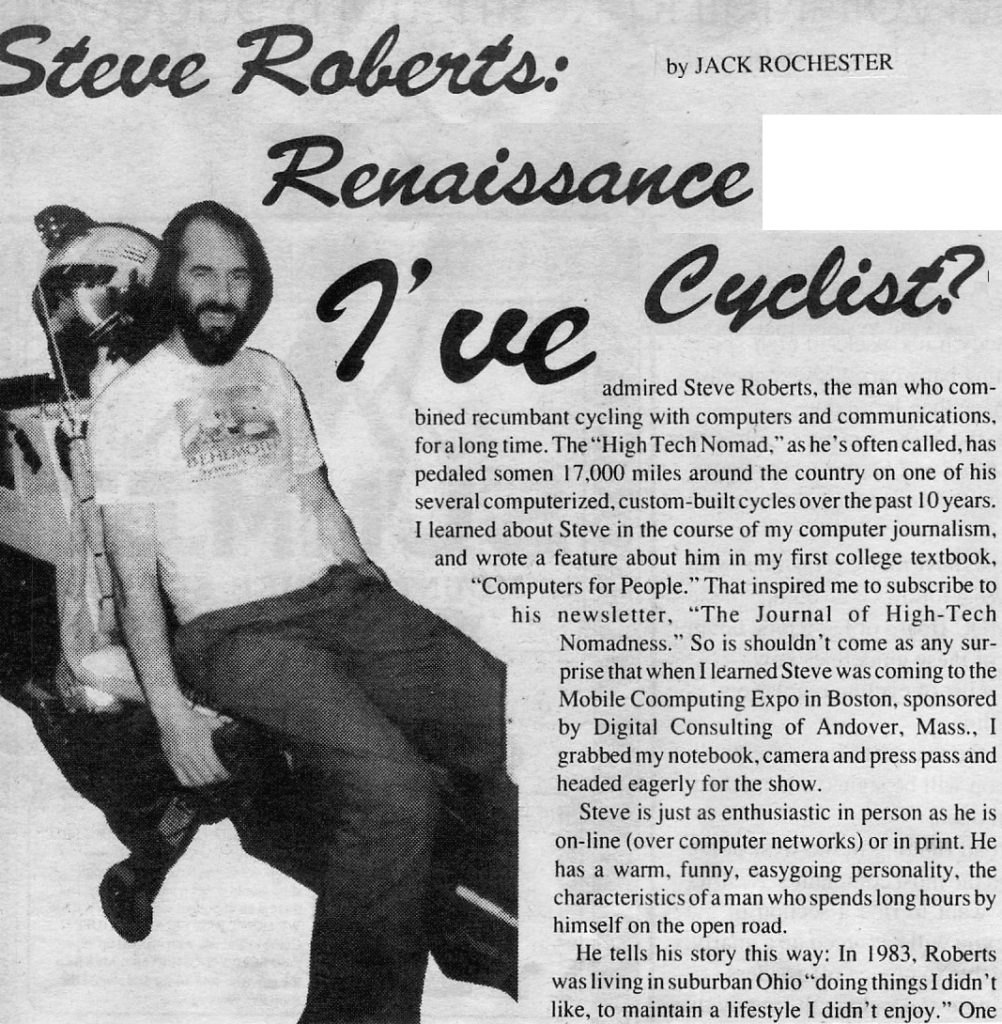 I don’t know the exact date of this, nor even the publication… but it is delightful. The author is Jack Rochester, a prolific Boston writer and cyclist, and the piece is the result of his visit with me during my appearance at the Mobile Computing Expo. His writing is playful, and really catches the spirit of BEHEMOTH…

I’ve admired Steve Roberts, the man who combined recumbent cycling with computers and communications, for a long time. The “High Tech Nomad,” as he’s often called, has pedaled some 17,000 miles around the country on one of his several computerized, custom-built cycles over the past 10 years. I learned about Steve in the course of my computer journalism, and wrote a feature about him in my first college textbook, Computers for People. That inspired me to subscribe to his newsletter, The Journal of High-Tech Nomadness. So is shouldn’t come as any surprise that when I learned Steve was coming to the Mobile Computing Expo in Boston, sponsored by Digital Consulting of Andover, Mass., I grabbed my notebook, camera and press pass and headed eagerly for the show.

Steve is just as enthusiastic in person as he is on-line (over computer networks) or in print. He has a warm, funny, easygoing personality, the characteristics of a man who spends long hours by himself on the open road.

He tells his story this way: In 1983, Roberts was living in suburban Ohio “doing things I didn’t like, to maintain a lifestyle I didn’t enjoy.” One day, while out on a ride with a friend, something “half human, half machine” changed his life forever. It was a man riding a recumbent bicycle.

“This would be my way out,” he writes in his book, Computing Across America. “I’d get rid of everything, move to a recumbent bicycle, and travel the world.”

Roberts made a list of his passions — bicycling, computers, ham radio, traveling and writing — and combined them into a new lifestyle. The result was the Winnebiko, custom-built by Jack Trumbull of Franklin Frames, and outfitted with a Radio Shack Model 100 portable computer.

Winnebiko spawned Winnebiko II, which begat Behemoth, Roberts’ state-of-the-art machine. Behemoth stands for Big Electronic Human Engineered Machine, and it is. Built at an estimated cost of $1.2 million, through the generous contributions of many sponsors such as Sun Microsystems, Behemoth weighs in at over 600 pounds. Also referred to by its owner and operator as the “loonie excursion module,” it is driven by a 105-speed set of gears, and tows a small trailer of ham radio and communications gear.

Electronics-wise, there are three computers: a Macintosh, a Sun workstation and a PC with a special micro screen called “The Private Eye” mounted to Roberts’ water-cooled helmet. A communications link to a satellite is used for computer communications and the cellular phone, complete with an on-board answering machine! Tunes come from a CD stereo, and if someone tries to steal Behemoth, there’s a security system that dials 911 itself.

Roberts has a treasure trove of wonderful stories about some of our favorite subjects: road kill, crazed humanoids behind the wheels of automobiles, and interesting encounters with people, like the hillbilly who wanted to know if he was from NASA. And mountains. Roberts’ wisdom: “Never turn onto a road with a sign that reads ‘mount’ or ‘hill.’ ” Many more are detailed in Computing Across America which is really a great bicycling book in the tradition of Off the Map: Bicycling Across Siberia by Mark Jennings. Another tale Roberts recounted was about a car pulling up beside him and the driver leaning out to say, “Pardon me, but do you have any Gray Poupon?” Steve vows he will next time.

Apologizing for the largess of his “calorie storage unit,” the result of being on a nationwide tour, Roberts explained that Behemoth is history, soon to be replaced by an amphibian sea Kayak that he’s planning to pedal — yes, it’s a pedal-driven propeller—across America. It sounds like a recumbent bicycle with a special fairing that floats. Roberts plans to take it up the Intercoastal Waterway and on various rivers.

“Many people are surprised to learn that you can cross most of the country on water,” he says.

So what’s to become of Behemoth? Although it has not been formally announced, it is being donated to The Computer Museum in Boston and should be on display by sometime early this summer.

For a copy of Roberts’ book or a subscription to his newsletter, write Nomadic Research Labs [obsolete address redacted]. And for a fascinating tour of the world of computers, visit The Computer Museum at 300 Congress Street in Boston.