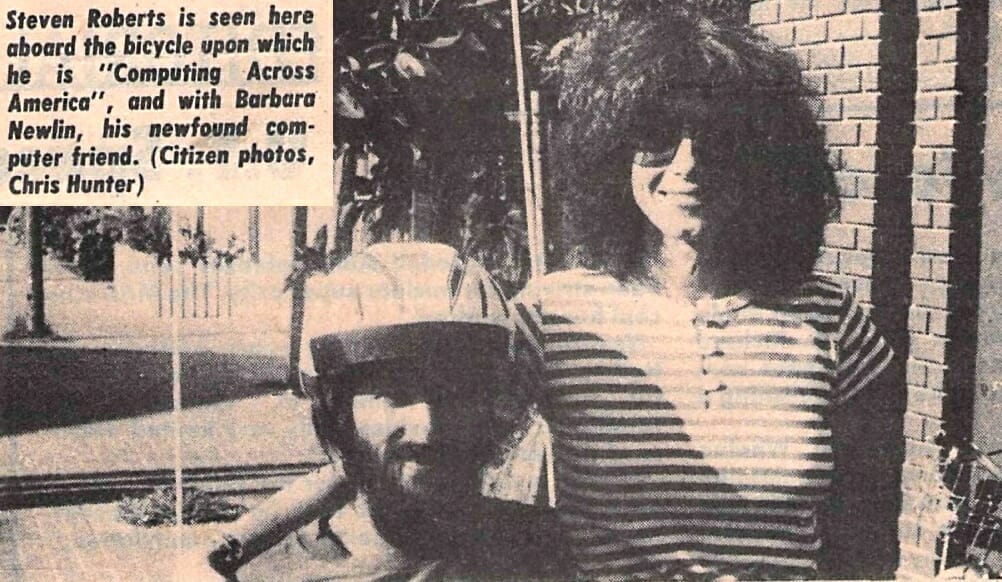 I am adding this to the archive server 30 years after its publication, and it is stunning to contemplate the cultural changes that have taken place since. In this beautifully written story in the Key West newspaper, I had arrived in town via computerized bicycle… which was odd enough. But what captured the writer’s imagination was the rendezvous in progress, as I was spending a week with a woman from California whom I had met online (also a chapter in my book). This was nearly unheard-of back then, except in the relatively tiny online communities of the day. The story thus took a human focus, a nice break from the usual tales about the bike itself.

There have been many examples of people who wanted to shed materialistic baggage in their lives and pursue a simple, uncluttered life. Henry David Thoreau went to Walden Pond to examine his existence without interference and those who come after him had similar goals. Some have pursued the gods of motion and travel as a means of coming face to face with the elusive mysteries of life. There are scores of stories and articles about individuals walking, sailing or bicycling around the country, continent or world. These lone adventurers, in the current era  at least, have often found that after completing their journeys, a book or series of articles gleaned from memory or scrawled notes would be welcomed by the more sedentary homebodies in the land.

So, along comes Steven Roberts, who is pedaling a bicycle across America. Here is this thin, athletic, black bearded fellow doing what has been done fairly often. It is still not commonplace to ride a bicycle across America, but how many times has there been a story about some Swede, Japanese or other person doing it? Right! A whole lot.

But wait, the bicycle Roberts is riding is a bit different. It’s called a “recumbent” and it doesn’t look at all like a normal 10-speed. It has a comfortable webbed seat which supports the rider’s back and is only inches off the ground. The bike is steered from a handlebar under the seat. Roberts’ legs are straight out in front of him and the pedals seem to be easy to reach. It’s sort of like a “Chopper” with its tiny front wheel, but the rear wheel has 18 gears for versatile power combinations. It seems there is something unique after all about this particular bike trip, and it is clear that not many people have seen a bicycle like this man’s. People, even biking enthusiasts, are stunned by its novel look. “How fast can it go?” is one of the three most asked questions Roberts listens to whenever he is explaining his transportation.

So it’s a unique bicycle, so what? But what are those solar panels on the cross bar? Solar panels? Hey, wait a minute, is this guy for real? The panels actually generate power for, (are you ready for this?) a computer. Yes, Steve Roberts has gone off on his strange bicycle and taken a computer along with him to look for America.

Lots of people, it sometimes seems, view computers as dehumanizing masters ready to take control of the earth and force humans into some sort of electronic subjugation. In this the year of “1984,” it is wonderfully refreshing to encounter someone who has not fear of the computer, but rather an imaginative ability to use it as a creative tool. Of Course, computers will eventually infiltrate all areas of life in our technological society, but Steve Roberts is using his computer now as a portable office in the most complete sense of the word.

A free-lance writer and professional computer expert, Roberts is (naturally) writing about his current adventure called Computing Across America. He won’t have to wait until it is over like many of his predecessors. Whenever he feels like it, he pulls out the computer keyboard he has snugly tucked into his carefully packed rig and plugs it into his solar powered battery cells. With a portable stool to sit on and his knees as a desk, he types his stories, ideas and other information into the machine. His location may be at the beach or by an isolated lake, but it is more than likely a peaceful and picturesque setting. Later on Roberts will find a telephone, hook up a special attachment, call his office in Ohio and his secretary will turn on her computer and download whatever Roberts’ little computer is uploading. In other words, Roberts’ computer allows him to work on his business as if he had never left the office.

He is a self taught computer wizard, having finished only two terms of formal education at the advanced level. Now he is one of the pros. He has published two books. (The Complete Guide to Microsystem Management and Industrial Design With Microcomputers), at least ten articles in computing magazines and many credits as a speaker at scientific conventions. He is working on a Computer Science textbook in addition to his bicycling adventure. He is also something of a romantic.

The romance, aside from the journey itself, enters the picture in the form of Barbara Newlin, a computer pro from Berkeley, California. She met Roberts through their computers and a national information service known as “CompuServe.” This is the tele-computer network that Roberts and other computer users hook into for their work and sometimes their play. Roberts says of it, “It’s a communication tool between people scattered all over the country, the electronic equivalent of a pub. They have a subsystem on it called the CB simulator and people gather there at all hours of the day and night and chat and make friends. They do everything from have long philosophical discussions to compu-sex. The fact that I’m using the CompuServe system gives me a stable social life (while on the road). My handle on the system is “Wordy.”

Roberts came to the attention of Barbara Newlin through an article he wrote in Online Today, a computing magazine, about his trip. His identity signal was included in the piece and since she is working on a computer book herself (albeit a somewhat more stationary one) she wrote to him via electronic mail. When he hooked his terminal into the network several weeks ago, he received a pleasant letter on his screen from Newlin. Since computer communication does not rely on the trusty but slow mail system, Newlin and Roberts were able to exchange a volume of letters that would have taken months for regular “pen pals” to accomplish…

Newlin says, “I happened to include my toll-free number in case he wanted to call and chat and happily he did that. We had a very nice conversation. I told him that I was about to get a book contract and when the contract came through, I sent him him another message saying, ‘Hey, guess what? I got my contract!’ and his response was to send me a beautiful bouquet of flowers.”

As Roberts was two thousand miles into his bike trip and heading for Key West, he decided to risk a rendezvous with the woman on the other friendly terminal. The obvious compatibility between the two computer users was evident by their growing communication (Roberts was downloading more information on a regular basis to Newlin than he was to his office computer in Ohio), so a meeting in the island city seemed the ideal way to explore their relationship further. Newlin agreed to fly from Berkeley and they met for the first time at the Key West airport. Their computers could not have gotten along any better. They are talking about the possibility of someday hooking up two computers and two bicycles, but that is down the road. When asked when they had to leave Key West, both replied in unison, “Too soon.”

Steven Roberts uses his computer in an imaginative, innovative way. His basic human sensitivity seems to have been increased by the growing applications of microcomputing in society rather than the reverse. After all, he was able to meet a very special person through the computer and may have discovered the oldest and most valuable human emotion through his programming.

The future holds many more discoveries for the technological age, but the individuals who are able to expand their vision through personal insight will always be the most valuable software. Roberts says that, “Computers are fast, accurate and stupid; people are slow, inaccurate and brilliant,” and the combination can be truly positive.

Someday, Computing Across America may become a modern classic, but for the week that Steven Roberts and Barbara Newlin spend their “Beach Fantasy” in Key West, writing books is their last concern. But their computers are probably working overtime.