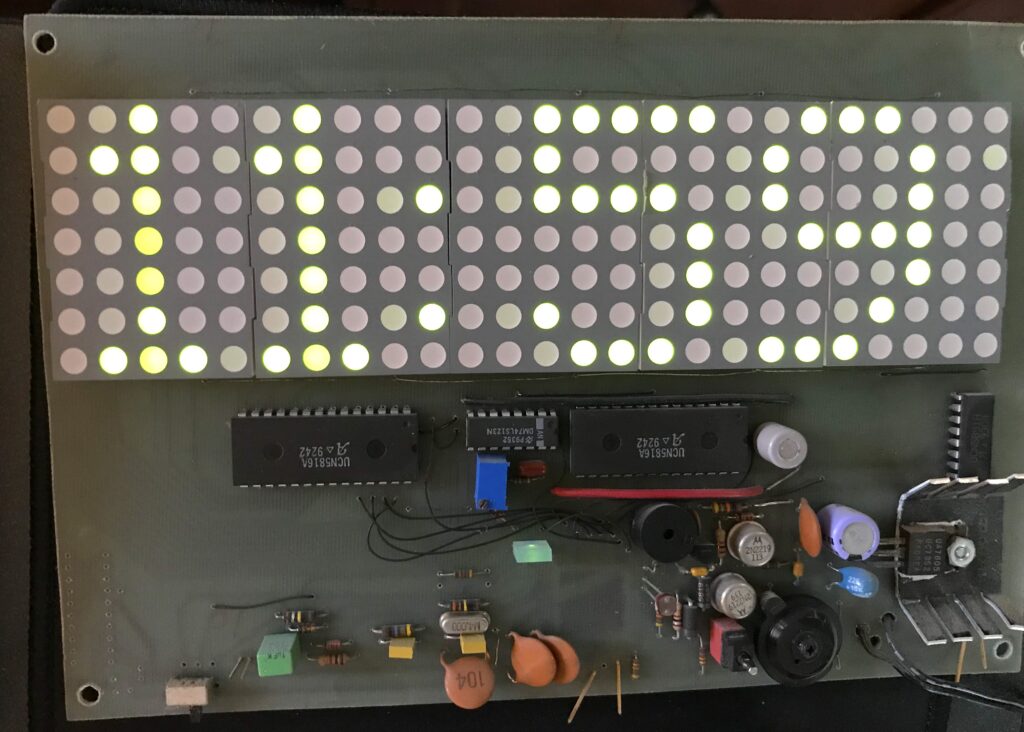 N4RVE, bicycle-immobile, is back on the air! The great pasta monopole arcing into the Santa Clara sky still needs a few more tuned radials to optimize radiation angle per Dave Wright’s suggestion, but hey, it works. Perched precariously on the ladder atop the boat, I drywall-screwed the automatic tuner (the AT-11 kit from Dwayne Kincaid, WD8OYG, as described in the January issue of QST) crookedly to the ceiling, draped coax and power cables over the fluorescents, and fired up the Icom 725 HF rig in BEHEMOTH’s trailer.

First contacts on 40 meters were Portland and Las Vegas, then a local mobile on 20 followed by a relaxed chat with a guy on the banks of the Mississippi in New Boston, Illinois. Haven’t chased any DX yet, receive performance is rather weak, and I can’t tune 80… but it’s a good first pass and satisfies that primal need to have an independent, battery-powered communications link from the lab. I’m also open to the occasional sked, if you’re out there hobnobbing about the airwaves. The tuner is a good deal, at $150 for the kit plus a few hours of enjoyable assembly work… anytime it sees a carrier of a few watts, it gets busy scanning the L-network components to create a match as determined by a little bifilar-wound toroidal SWR sensor on the 68HC11’s analog ports. A few seconds later, a green LED indicates a match of 1.5:1 or better, if’n yer lucky…

By the way, speaking of launching RF magically through the atmosphere, I just fired up the boat’s Qualcomm OmniTRACS terminal and sent a test message. I’ll be working with Nathan Parker (of video turret controller fame, now at Qualcomm), on the new version of our email code — this will be one of the data paths we’ll be using for the Microship telemetry blocks (the other is HF PACTOR).

You may recall recent postings in which we have begun looking into carrying our own trailer on-board… the plot is thickening. It appears that 500 pounds (or less, if at all possible!) might squeeze into our 5,500 pound all-up weight budget… I just finished a first pass at the weight study database with a mix of actual items and estimates of groups, though I probably forgot something major like distributed cabling load. Information is flowing in from Trailex (aluminum take-apart trailers), Dexter Axle (Torflex suspensions), an aluminum racing wheel company, trailer parts vendors, and even a source of air springs. Mechanical guru David Berkstresser is working on this with us, of course, and a talk yesterday with our marine architect, John Marples, suggests that we’re not being completely irrational about this idea. The key is keeping it LIGHT, and using the boat to provide structural rigidity once it’s attached.

Rigging has been on hold pending the solution to the deck structure problem (finding someone to do the critical fixturing to support mast, stays, shrouds, and traveler… as well as the new pivoting centerboard). This evening we’re meeting with Kim Desenberg and Gary Helms, and if all goes well we might send the ship off to Kim’s boatyard in Alameda for a bit of surgery followed by much-needed painting at Gary’s. Doubtless, I’ll be pacing in the waiting room, looking up anxiously as every white-jacketed glass-doc strolls by with fresh epoxy on his hands…

This just in: Ballenger has delivered the real quote on the spars, which will be added after all the deck work is complete. $3,104 for the mast, $700 for the boom, $1,264 for standing rigging, $395 for running rigging, $225 for mast tapering, $925 transport and installation, and $60/hour for anything else that might come up. <shudder> The rig is pretty much identical to the stock F-31 rig, but with a few exceptions: the mast has an added flatside conversion track for added stiffness and easier short-handed mainsail handling, there’s a spinnaker halyard and sheave box, and there’s a custom flange-type mast step. Other than that, it’s a basic fractional sloop rig with roller furling headstay, masthead crane, aft swept tapered airfoil spreaders, all kept aloft and in column by two cap shrouds, two intermediates, two diamonds, two after lowers, and two forward lowers. This does not include sails and the deck fixtures necessary to hold it all — the acquisition cost of the boat itself is about to disappear into the noise!

In this, the 100th issue of the Microship Status Report (Yikes! We’re not sailing YET?), I’d like to start giving my partner a direct voice. You’ve heard me rhapsodize about her a number of times, but from now on every other issue or so will carry an item or two with her byline.

Taxes are done, and it’s time to be creative! I’ve put up some new graphics on the site and finally added some much needed text to the Microship page.

Mark Moorcroft and John Crump have been extremely helpful in getting the site updated. Mark searched the web for our sponsors’ URLs and came back with about 15 new links; John is scanning sponsor logos to go on the site. We want to put up individual sponsor pages with contact info for those without a web presence.

There are 12 more days ’til my West Marine employee discount kicks in — and what better activity than to think about how to spend it? My wish list has expanded into a FileMaker Pro database, with weight and associate price being the key fields. The only problem is that it’s hard to visualize. As many of you know, there’s only one solution: CAD (cardboard aided design).

Dumpster diving was a score — three big sheets of beautiful cardboard. I loaded up the truck and wondered what would be my first creation. I thumbed the glossy West Marine catalog. Ahh… page 437… the Force 10 Cooktop with Broiler. I took her measurements, laid the cardboard across the floor, and within a half hour she began to take shape. I lifted her gently and took her to the galley. She fit snugly against the bulkhead. It’s amazing what you can do with a square, some cardboard, and a hot glue gun! I think Steve’s created a monster. 🙂

(Faun jokes that every two weeks, West Marine will send her an invoice instead of a paycheck. –Steve)

Speaking of new toys, my old friend Steve Orr, a digital signal processing wizard in Cincinnati, has always been one of the true diehard electronics hobbyists. In our teens, we regularly swapped notes about our various inventions and techie dreams, and in 1974, when the Intel 8008 changed the world and Faun was 3-going-on-4, we both built homebrew wirewrapped systems and started obsessive hacking. He got his MSEE and became an engineer; I became an entrepreneurial ungineer; he went into industry; I became a technomad; he settled down with family; I wandered and frolicked. Periodically we swap tales and chuckle over the contrasts of our lives, looking back over the last quarter century with oddly parallel perspectives.

Anyway, Steve has always enjoyed building clocks, starting with the venerable 7490/7442 combo driving 7-segment LEDs. His latest, now perched atop my Mac, is destined for the Microship console: a 68HC05 running a matrix of 210 green LEDs. There are about 50 display classes that invoke the time graphically, then after a few seconds, the time digits are used as the seed for the old Conway “Life” algorithm. It’s a clock that’s actually fun to watch, and it even dims itself to match ambient lighting. I’m trying to convince him to sell it as a kit…

Speaking of rocking-on-the-porch reminiscing about the good ole days, I had a startling stab from the past the other night. John Bumgarner recently donated a few boxes of old electronics stuff (the smell alone recalling deeply buried memories of octal-socketed tubes, open-frame relays, wax paper capacitors, roller inductors, big honkin’ transformers, and laced cables… sigh). Anyway, in there was a type 200B Variac, the classic variable autotransformer, and I was feeling that odd blend of laziness and creativity, so… what the hell, I packaged it. In a SLO coffee can. With a big nasty toggle switch for bypass and a hacked-off, knotted TV cheater cord (remember those?). It was wonderful. I felt like a kid again. Now we have a true sinewave light dimmer… none of that newfangled noisy SCR stuff!

In other news, the current issue of Cruising World has a small article about the Microship, complete with photos of boat and BEHEMOTH. This is a great door-opener in the nautical world, though I cringe at one error in the text — the boat is identified as an Ian Farrier design. It isn’t… it was built by John Walton and Mike Michie back in 1983, using the Farrier 4-bar crossbeam folding scheme. Since it predated the F-boats, I’m sure Ian wouldn’t want to claim it!

Finally, we’re off tomorrow to San Diego for 3 days, mostly to attend (oh yeah, and speak at) the SAE Electric Vehicle conference. I hope to return with much more than my present skimpy knowledge of peak power tracking, motor selection, efficient speed controls, new battery technology, and so on.