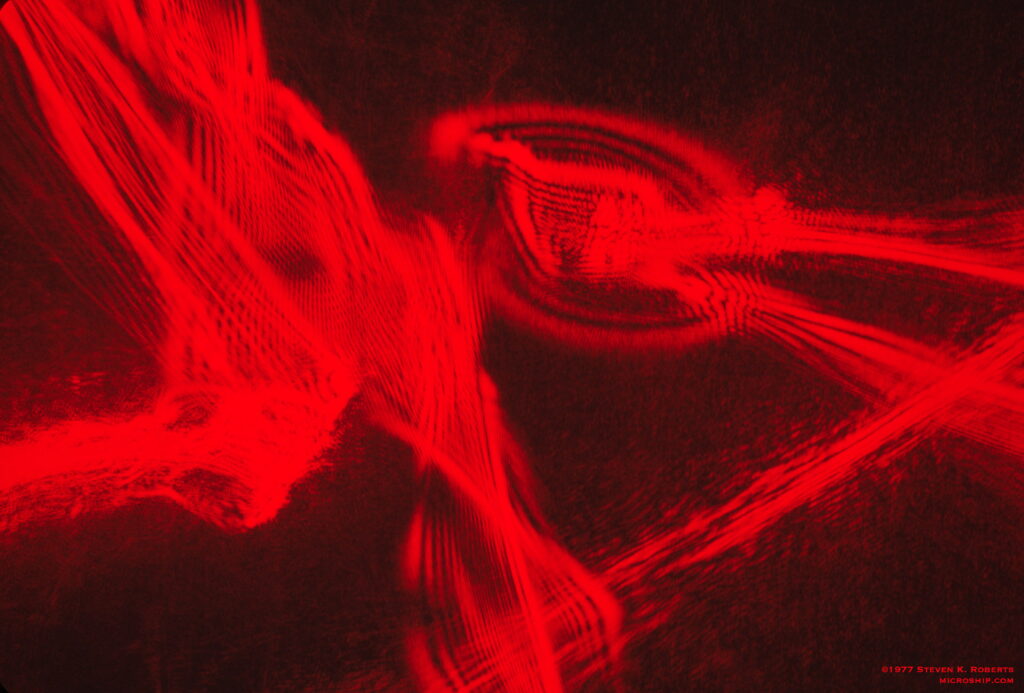 Restlessness and discontent are the first necessities of progress.

It has been a busy month in the Microship lab, and this date marks the approximate halfway point of our two-year tenancy here. I’d like to open this issue with a heartfelt THANK YOU to Apple Computer for continuing to support this wonderful 2400 square-foot facility, without which I can’t even imagine pursuing such a complex project. One year from now, we should theoretically be launching the ship… ready or not!

The Picoship And Captain Mannikin

The 1/5-scale (6-foot) fiberglass hull model generated by David Berkstresser (video at the link) is becoming a useful visualization tool. Mike Gittelsohn, a recent escapee of the software business with a wide range of aquatic and technomadic interests, has made a few trips down from Berkeley to fashion cardboard bulkheads and cockpit… and Faun made a run to a local art-supply store to pick up an artist’s mannikin that happens to be an almost exact 1/5-scale model of me. The combination is a wonderfully helpful tool for imagining how all this will fit together, and over the next few weeks we’re hoping to build in the doghouse, dodger, and key internal surfaces.

What I’d LIKE to do, if time permits, is expand this model to include one ama and associated crossbeams, folding mini-solar array, and the 8-foot mast with matching rigging. This should further help with visualization, reduce the amount of hand-waving necessary during speaking gigs, and perhaps find a spot in the museum along with BEHEMOTH when I’m at last free of the lab and traveling.

All this has brought to mind a mildly crazy but potentially interesting concept — replacing the planned “kayakamaran” with a 1/3-scale model of the Microship (the nanoship, of course). This little 10-foot folding trimaran would have a freestanding rig and pedal drive, and would make a great dinghy and playboat. If I end up traveling solo, the process of assembling two kayaks with plug-in crossbeams may turn out to be a bit of a challenge… and at 17′, the kayaks do present a bit of a storage problem on board. We’ll see. Any volunteers?

On the subject of internal structures, the most significant and complex is the control console, which occupies the entire port-side cabin wall. This has been evolving in my thoughts for quite a while, and seems to have stabilized into a 10′ long, 16″ tall, 20″ deep pressurized foam-core enclosure with six 19″ sloping-front rackmount bays. Each bay has an independent Lexan door, hinged at the top, with gasket-compressing seals. To significantly simplify internal cabling and minimize the need for thrice the otherwise required number of connectors, the entire console is one pressure environment — with any open door depressurizing the whole thing EXCEPT for the frequent-access space used for battery charging bases and replaceable media.

This means that I’ll have to be even more motivated to minimize the number of accesses to any console internals — each opening event costs a bit of power and desiccant life. If the Newton front end project were not going so well, I’d be skeptical about this, but I’m becoming more and more convinced that the entire system can be implemented as a hierarchy of graphic views, accessible from anywhere on or off the ship (and even via a remote web browser). If we do our job right, the console system can spend its life blinking happily behind hermetic seals while sealed Newtons and Tarpons handle the human interface.

Views Of The Network

Yes, the control network is coming well. Though ship-fabrication progress has been slow lately (except for two very productive bulkhead glassing sessions contributed by Faun, who did an excellent job), we’ve moved ahead quite a bit on the front-end tools. A few recent highlights:

And finally, while we’re on network topics, thanks go to Steve Sergeant and Dave Wright for sniffing out a couple of the more annoying noise problems I’ve had in a while. It turns out that the eight bus lines connecting the two audio crosspoint levels were grounded at BOTH ends, creating a nasty ground loop condition… and that my bench setup compounded the problem with an inadvertent daisy-chained ground that put some of the audio components quite a few millivolts away from zero. Nasty stuff, but now that the source has been identified it should be easy to fix.

You read that right… I’m looking for help. With departure exactly one year away, it’s time to get serious about NRL’s next home base. This involves a lot more than administrative and mail-forwarding help — I need a MANAGER.

More to the point, I need a joint-venture partner… or a team that collectively accomplishes the following:

I’m not sure how best to structure this — it depends a lot on the personalities and number of people involved. In general, I’m expecting to share cashflow on a percentage basis in a variety of project areas (speaking, publishing, video, writing, products, whatever) as well as support the overhead of a base office.

The need is strong, and immediate. If you think you might fit in, or have some ideas that can help get a handle on an increasingly complex adventure, please let me know. I would prefer to find someone not impossibly far from Silicon Valley, at least for starters — there’s a long learning curve involved that is best approached locally!

We have FIVE new thank-you’s this month!

First, I want to gratefully acknowledge Statpower Technologies of Burnaby, BC in Canada. They have previously donated a 10-Amp, 12-Volt charger and 150-Watt inverter for the Fulmar (which will be moved to this ship), as well as an inverter for BEHEMOTH some years earlier. Most recently, Statpower has solved a major power requirement by shipping a 10-Amp, 24-Volt charger that will keep the thruster bank energized when AC power is available. The day it arrived, I cabled the four Trojan T-105 batteries into a series string, terminated them in a monster barrier strip, and satisfied a 5-month-old thirst.

AllPen, in addition to kindly giving the nod to some of Erik Browne’s time on the clock, has donated a copy of NetHopper — the Newton web browser I mentioned earlier. I’m looking forward to wireless perusal of on-board information resources!

There’s a pair of immensely clever new devices sitting on the development bench awaiting installation — the ADB I/O from Beehive Technologies. These things are brilliant: you can daisy-chain up to four of ’em on the Macintosh ADB (Apple Desktop Bus), and each one provides four relay outputs and four data acquisition channels (configurable as analog input, digital input, or digital output). The units come with HyperCard XCMDs, utilities, C interfaces, 4th dimension externals, and Scripting Additions… meaning that with relatively little effort and very low cost, live I/O can be added to a Macintosh for data collection, control, watchdog monitoring, driving presentation equipment, security sensing, or whatever. This product is a winner! In the Microship application, ADB I/O will allow the console Macintosh to power-control the whole system, reset and reload the FORTH network by keeping an eye on hardware watchdog bits, and force special configuration modes and overrides as needed.

Our fourth sponsor-accolade this issue goes to Adobe, which has just donated the latest versions of Illustrator and PageMaker — two absolutely essential tools for our web site and publication activities. Faun has already used Illustrator to generate the best-yet image of the ship’s future appearance . These, combined with PhotoShop and PageMill, comprise a very well-orchestrated suite of applications that have really simplified our graphic and publications activities.

And most recently, Coherent has jumped into the fray with the donation of two retina-blasters — amazing little 635-nm diode lasers running 15 milliwatts! At one inch long and a half-inch diameter, drawing 100mA at 5V, the performance is astonishing, easily better in both brightness and collimation than my HeNe laser. Oh, what are they for? One lives in the video turret as a steerable prowler-intimidation device that will direct the beam at the current intrusion sensor zone; the other will be integrated with an X-Y scanner for a live sponsor-logo laser show when the boat is at shows. Nice stuff.Thanks again to all!

Finally, I have two upcoming media appearances to report, as well as a couple of plugs for freelancing friends…

Second, I just filmed Wednesday with Computer Chronicles — working with Patrick Moyroud, field producer and excellent interviewer. The piece included some requisite bike footage, lots of shots around the lab, and close-up demos of the wireless front end to the control network. It’s scheduled to air on PBS affiliates during the week beginning January 21, 1997. In the SF Bay Area, the specific times are:

Finally, two very special friends are available for freelance jobs, and I can heartily recommend them both with no bias whatsoever <grin>…

Faun Skyles, my mate for the past 2.5 years, is jumping into full-time web site design and publication work, and she’s GOOD. Our site is entirely her effort (I just crank out the text), and she’s also done about a half-dozen others. Her new business is called “Decktop Publishing.”

Also, my previous traveling partner, Maggie Victor, is in town for a while. In the five years since we took off in different directions, she has become a certified massage therapist (have massage chair, will travel). She’s available for on-site corporate de-stressing (a holiday gift for all your employees?), trade-show booth contracts, or full-body Swedish massage in your home. Maggie’s email access is fragile these days, but let me know if you want to get in touch with her and I’ll pass along your contact info.

And now… back to designing the ship’s plumbing… about to place an epic West Marine order!