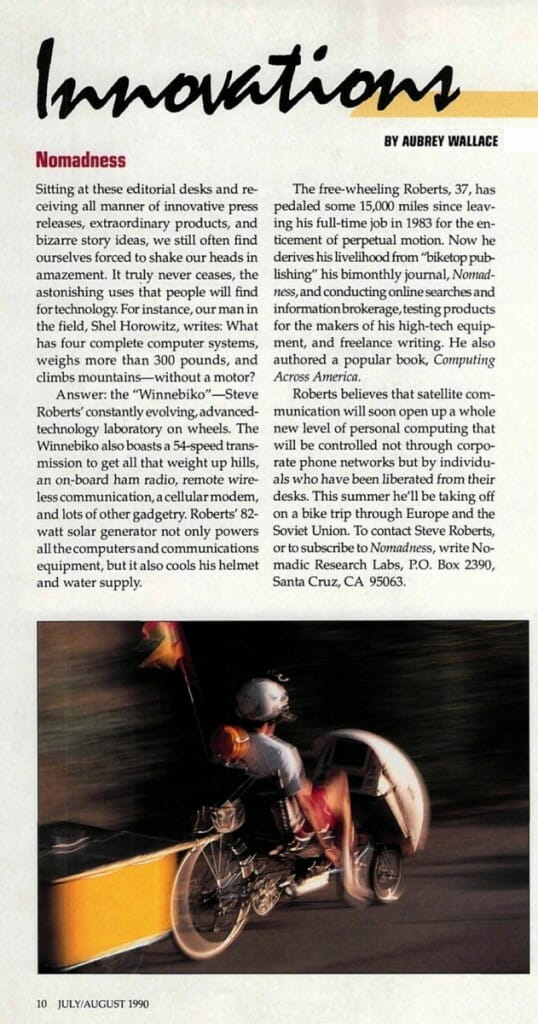 This was the magazine associated with the giant ComputerLand retail chain from 1987 until sometime in the early ’90s; issues are rare. The article itself is a quick look at the state of BEHEMOTH in mid-1990, when I was working on it in the Bikelab at Sun Microsystems.

I chuckle now, over two decades later, at the way I was a sort of agent of future shock… energy was very high. I didn’t know yet that the BEHEMOTH Effect was about to invert the ratio of lab time to road time as geeky complexity overtook the simple pleasures of technomadics.

Sitting at these editorial desks and receiving all manner of innovative press releases, extraordinary products, and bizarre story ideas, we still often find ourselves forced to shake our heads in amazement. It truly never ceases, the astonishing uses that people will find for technology. For instance, our man in the field, Shel Horowitz, writes: What has four complete computer systems, weighs more than 300 pounds, and climbs mountains — without a motor?

Answer: the “Winnebiko” — Steve Roberts’ constantly evolving, advanced technology laboratory on wheels. The Winnebiko also boasts a 54-speed transmission to get all that weight up hills, an on-board ham radio, remote wireless communication, a cellular modem, and lots of other gadgetry. Roberts’ 82-watt solar generator not only powers all the computers and communications equipment, but it also cools his helmet and water supply.

The free-wheeling Roberts, 37, has pedaled some 15,000 miles since leaving his full-time job in 1983 for the enticement of perpetual motion. Now he derives his livelihood from “biketop publishing” his bimonthly journal, Nomadness, and conducting online searches and information brokerage, testing products for the makers of his high-tech equipment, and freelance writing. He also authored a popular book, Computing Across America.

Roberts believes that satellite communication will soon open up a whole new level of personal computing that will be controlled not through corporate phone networks but by individuals who have been liberated from their desks. This summer he’ll be taking off on a bike trip through Europe and the Soviet Union. To contact Steve Roberts, or to subscribe to Nomadness, write Nomadic Research Labs, [obsolete mailing address redacted].