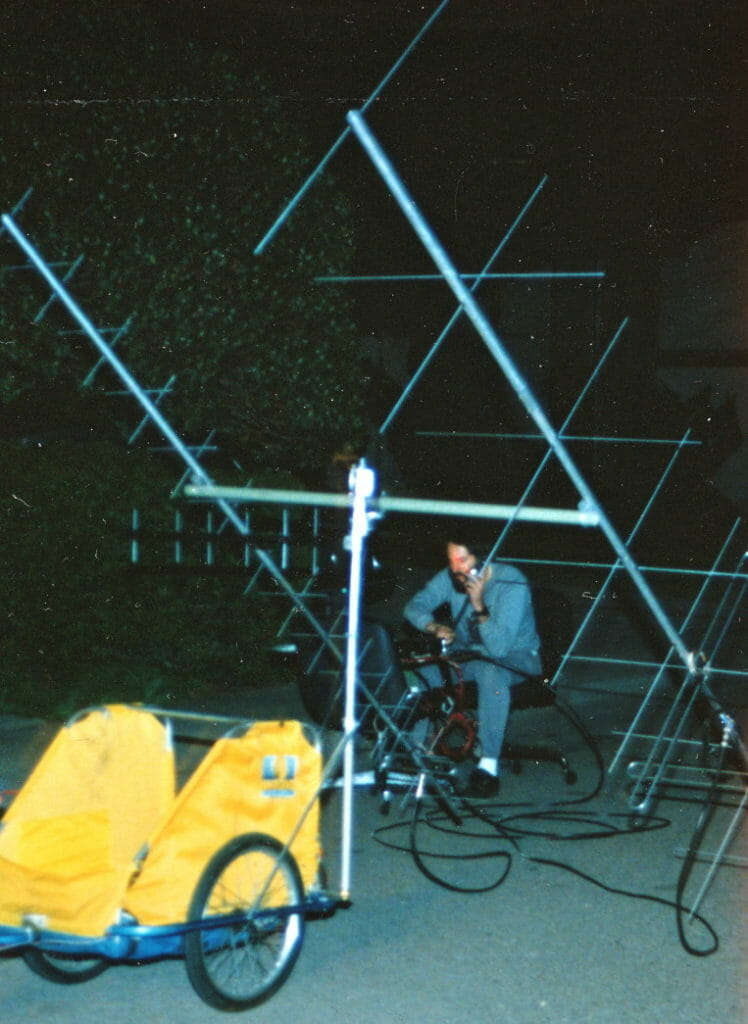 This is the third and final part of my little series about wireless networking in InfoWorld, and like the others (packet radio and cellular data), it fell directly out of a subject dear to my heart. I was an avid amateur radio satellite user, as well as being deeply involved in packet radio. This article is about the intersection of those two things, but the photo here is of me doing voice communications through the OSCAR 13 satellite… with uplink and downlink on 2m and 70cm bands via a KLM crossed-yagi antenna, ARR preamps, and the Yaesu 290 & 790 multimode “twins.” In this picture, I was in Milpitas, chatting with a fellow in Tasmania.

The online world is becoming the intellectual hometown of millions, offering a rich environment no matter where you happen to park your body. Traveling endlessly on a computerized bicycle, I have signed on from some of the most backward cultural black holes imaginable to find life as usual in the nets: old friends, deals in the making, and an endless swirl of information. It’s all there, and even those who doubt the validity of the on-line community find themselves using E-Mail despite themselves.

But there is a problem: It all depends on wires. Now, wires are pretty reliable things, and as the planet gets more and more wrapped up in them, it becomes rather silly to fret about their potential failure. But it’s not the reliability of wire that is an issue, it’s politics.

Every network is a closed culture tied to one or more host computer systems, sometimes linked by gateways to others. Certainly the richness of this interconnection is becoming more and more robust, but at some point it all boils down to phone lines, dedicated microwave links, stable sources of power, centralized mainframes, account maintenance, and other things that depend upon social and corporate continuity.

These very requirements have delayed the introduction of on-line networks into some parts of the world that need it most, places where individuals are isolated and prevented from communicating by governments or simply a lack of technology.

And so we have a luxurious resource that could abruptly fail in the event of social unrest or natural disaster, and we erroneously perceive “global communication” in what is actually a tool of the rich and well-connected. This is indeed a problem.

THE ALLURE OF RADIO

Amateur radio operators have been building new tools as a matter of habit ever since the hobby was born. For the most part, these have had to do with improved modulation methods and ever more clever radio circuit designs, and thus have had little impact on the computer world. Not so with packet radio, a phenomenon that has swept through the hobbyist community during the last few years.

Packet, simply, is wireless data communication. But unlike traditional radioteletype standards, it incorporates the networking protocols that evolved in the mainstream computer datacomm world. Packet is fully error-correcting, supports unattended file transfer, and can flexibly accommodate unplanned changes to the network topology. It works so well that ham radio operators now take for granted the presence of an international packet BBS community, with thousands of home computers storing and forwarding messages around the clock. The network software is generally free, the computers can be just about any PC or Mac, the radios are standard VHF or UHF rigs, and the magic digital black box that makes it all happen — the terminal node controller, or TNC — costs an average of $200. I even have a packet radio station running on the Macintosh Portable on my bicycle and, frankly, it’s no big investment in cost or weight.

This is all wonderful for sending E-Mail to other hams and downloading technical files, but ignore the ham radio part for a moment and consider the implications.

What we really have here is a working international data network, owned entirely by its users and absolutely independent of commercially owned computers, satellites, and phone lines. Most stations do depend on AC power, but there’s nothing sacred about that — a laptop/TNC/radio combo will work just fine on battery or solar power, and more and more people are doing just that to ensure stable communications in the event of earthquakes and other disasters.

Not only is the network owned by its users and thus immune to most disruptions, it also uses a communications medium that has no respect for national borders or other artificial constraints. This means that a significant penetration of packet stations worldwide could potentially knit people everywhere into a single global information community, not to mention providing easy E-Mail service to travelers who would otherwise find themselves out of touch.

At the moment, there is a significant regulatory constraint on all this: Ham radio frequencies may not be used for business or by unlicensed people. But there is change in the air that may perk up a lot of ears: A new license class is currently being considered by the FCC that would eliminate the historical requirement that all hams know the Morse code. This makes a few traditionalists squirm, but the fact is the code has discouraged tens of thousands of people from getting their ham licenses. If the new “digital” class is passed, we will suddenly have a networkers’ paradise on our airwaves.

While all this has been developing, a small population of creative hams has been feverishly working on a couple of exciting fronts. First, there are now public-domain TCP/IP packages for packet, essentially allowing any PC- or Mac-based station to implement the full networking TCP/IP protocol over radio-based communication. Not only does this add significant flexibility to the network itself, it also opens the door to gateways between ham packet and the Unix-based Usenet community. This essentially creates a path from a briefcase network node to just about any E-Mail location in the world. (The Usenet supports DASnet and other links to dozens of external stand alone networks, including MCI Mail.)

But perhaps the most exciting development in packet networking is the quartet of “Microsats” set for launch the end of January from Kourou, French Guiana.

Comparing ham satellites to the multi million-dollar commercial models is almost amusing. The Microsats are 9-inch cubes weighing less than 25 pounds, yet they contain a multitasking V40 DOS environment with 8 megabytes of RAM. The “birds” are covered with high-efficiency Solarex solar cells and use intelligent power-management techniques to keep the space-rated Nicad batteries happy. There are a variety of low-power transmitters and receivers to accommodate different operating modes, and the entire system is bus-structured under microprocessor control, handling everything from spacecraft telemetry to operations scheduling and BBS functions. And the antennas are simply metal carpenter’s tape blades, which spring into their extended positions when the satellites are deployed from the Ariane 4 rocket.

One of the most ingenious parts of the Microsat is its attitude control system, something typically managed with active rocket thrusters on the big birds. On the Microsats, rod magnets are mounted parallel to the Z-axis of each satellite, causing automatic alignment with the earth’s magnetic field during orbit. Spin stabilization (to prevent baking one side of the satellite while freezing the other) is provided by painting one side of each antenna blade black and the other white — the resulting energy difference of photons impacting from sunlight creates rotational torque. To keep the Microsats from spinning too fast, ferrous material is mounted in the X-Y plane; this results in a stable speed somewhere between one-quarter and one RPM (for an explanation of why, consult your physics professor).

This design typifies the spirit of ham radio, where the combination of fun-motivated wizardry and tight, out-of-pocket operating budgets enforces a level of engineering elegance seldom found in mainstream corporate culture.

Once the Microsats are in orbit, a powerful new link will appear in the packet networking world. Two of the four birds are sun-synchronous orbiting BBSes, which will place them over every part of the world at approximately 10:30 a.m. and p.m., local time. If you’re bicycling across Russia and want to send electronic mail to your folks in Kentucky, for example, simply connect to the Microsat using a portable satellite earth station (which fits easily in a backpack and uses a “turnstile” of collapsible whip antennas). At this point, it feels like any other BBS — simply download incoming mail and upload outgoing mail, then log off. When the satellite flies over the United States a few hours later, it will notice it has mail for a gateway station and automatically send it, whereupon local hams will port it into the traffic system for eventual delivery to the recipient.

It’s that simple, and it will get simpler. Communication tools this efficient and cheap will not remain the exclusive province of hams for long, not when a small company can just about own its own satellite for a few hundred thousand dollars, including launch fees. Microsat technology is not limited to BBS and networking functions. One of the four birds. Webersat, carries a camera that can be controlled from the ground: another includes a speech synthesizer beacon that will broadcast uploaded voice messages to classrooms around the world.

All this reveals much about the motivations behind this technology. Competitive pressures, marketing, and quarterly bottom lines result in very different design goals from those of passion and obsession. Remember the hobbyist culture that launched the whole personal computer industry? Ever wonder where all the excitement went? It’s still alive —in the airwaves.

Steven K. Roberts, N4RVE, is currently In Santa Cruz readying his Winnebiko System 3 (a recumbent bicycle containing various and extensive computer and communications hardware) for international travel beginning this summer. He is publishing a bimonthly journal detailing the system and the adventure.

Posted in Articles by SKR and tagged InfoWorld, new-archive
← Call to NomadnessThe Trick Cyclist of the Computer Age – Independent →