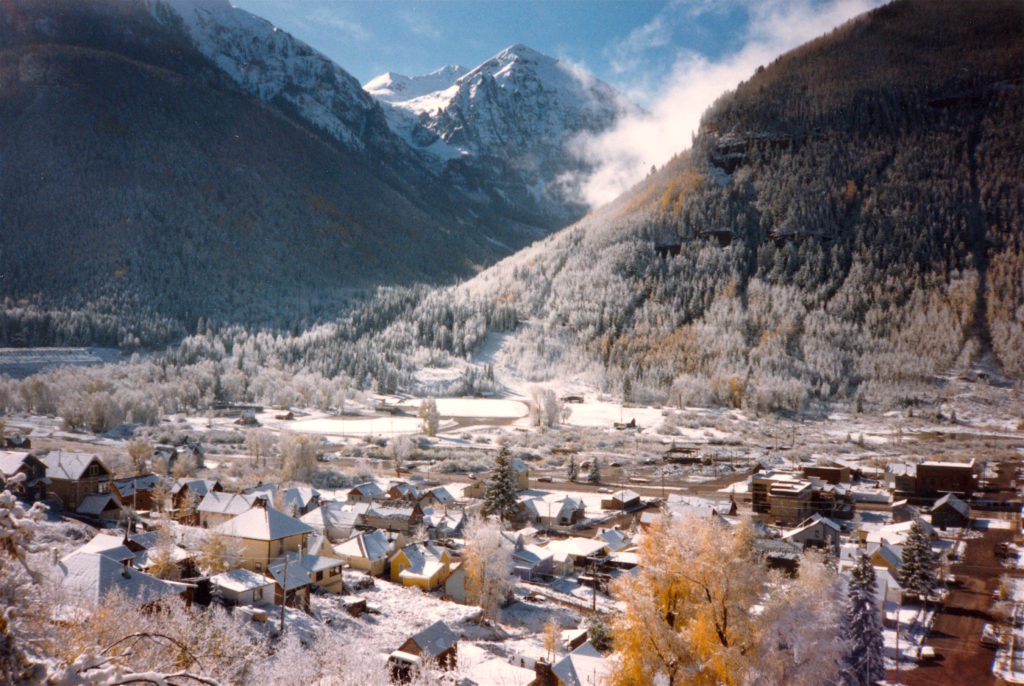 The Computing Across America adventure was an eye-opener on many levels, and one of the most lingering was the discovery of Telluride… still dreamy and remote in 1984. This vignette took place on the anniversary of my departure, 7370 miles and a lifetime before in Columbus. I didn’t even mind getting snowed in for a while, the journey on hold, with new friends and a magical place redefining the very nature of my quest. 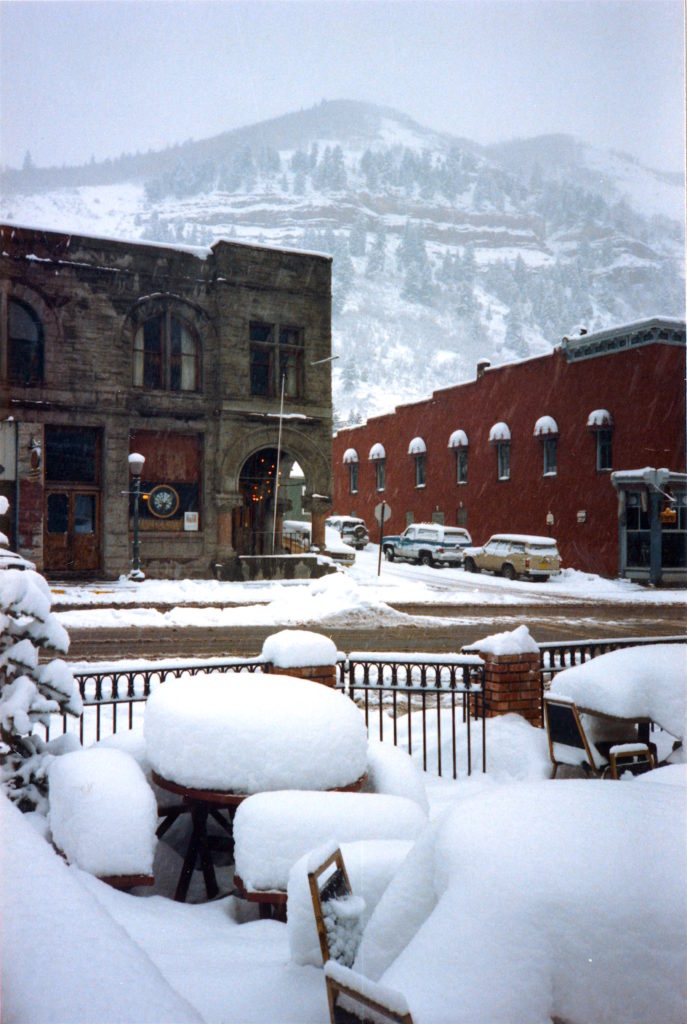 One year on the road, one year on a bicycle. A year homeless, a year of uncertainty, a year of learning. I lay alone in the living room, snug in a layer of North Face goose down, a cat purring softly on my belly. I stroked her absently, remembering my cat, Monsieur Le Roi du Foret, “M” for short, killed by a car a few days before my departure. He had darted beneath the wheels as if he had known it was over—as if he had realized in feline despair that his world was evaporating and saw no alternative but to end it.

I remember the shock of death, the slowly glazing eyes, my own tears. I pulled Ed’s cat up to my face and breathed into her fur, warm and alive. Her purrs made micropuffs in the cold morning air.

One year. In a little western-Colorado town, I arose and lit the wood stove. My host was on a gig in Utah and I puttered around the house alone, lazy, still exhausted. As always, the list of things to do haunted me, but the PR hustle seemed futile, the USA Today column intimidating, this book project overwhelming.

A walk. Yes, a walk. The sun was breaking over mountains covered in fresh snow, the ghostly houses on the hillside just visible through morning mist in quaint Victorian charm. At 8,745 feet, we were in the clouds, and they cruised slowly around town, stopping to recline in the folds of hills like the lazy spirits of friendly dragons.

I joined them, strolling the streets with the morning throng. Faces were rosy; the down vests and Patagonia jackets lending a cozy touch to a place hazy with the smell of woodstoves. On a mountain to the south I could see the ski runs, marked by plumes of smoke as the seasonal clearing progressed. There were big investment dollars up there, fueling a classic controversy between developers and residents.

7,370 miles—between two and three million pedal cranks, depending on the amount of coasting.

Not a bad tally for my thirty-first year, but the attempt to wax rhapsodic fell flat somehow. This was no longer a curiosity—I did all my gee-whizzing in the first few months of the journey and now just accepted it as the norm. Of course I live on a bicycle; yeah, yeah, this is a portable computer—it’s my link with the universe. How can anybody live without one? How can anybody ride a regular bike? What, you’ve been in the same place for eight years?

The travel itself had become a backdrop for something else—the road was my equivalent of living room walls.

A year. I sat and watched Telluride happen as it daily does: people checking the “free box” for the latest treasures, people charting, biking, itching for ski season, and exclaiming at the blaze of autumn aspens. It’s a rougher place than Crested Butte, and some of the faces are hardened by attitudes that mark them as transient labor. But the sense of “home” is unmistakable, the allure obvious in every upward glance at the horizon.

I drained the coffee and grinned suddenly. I was getting paid for this, eh? Alright then, time to get to work.

I packed the yellow daypack. Basic essentials only: computer, water bottle, camera, GORP, jacket, towel. I set out on foot into the mountains, accompanied by somebody’s dog… walking along Bear Creek and looking down on Telluride through the sparse yellow filter of young aspens. The scene danced with bright detail, alive in every pixel like a Richard Dadd painting.

One year. I walked along the dirt road higher and deeper into the mountains, sensing the calm but somehow intent on something—a rumored waterfall, a mine, a place to work, a clearing, the end of the road. I was already “there,” of course, but I strode on deliberately as if habitually enroute.

Suddenly I stopped to look around.

I blinked and sat down on a profoundly uncomfortable rock.

The canyon was in layers, like some kind of cosmic torte, the range of textures dizzying, the beauty painful. I took off the pack. Aspens fell away down the sunny valley, great splashes of gold that appeared to glow from within—alive with a shimmering radiance that belied their slow slide into winter dormancy.

The colors overwhelmed; they moved me. I sat surrounded by pure grandeur on a very, very large scale. Directly across the creek was a vertical slope of pines, interspersed by yellow-green-brown shrubbery. As I looked higher they gave way gradually to rock, in layers of delicious dessert-colors that defied any sane attempt at description. Higher still were the rugged peaks themselves, snow in every crevice, sparkles in every shadowy pocket.

A snow tunnel blazed white against surroundings of everything but white, expelling from its black core a glittering rivulet that danced like an animated thread to the stream rushing below.

Hands shaking, I pulled out the computer and opened a file, then sat helpless at the keyboard with the machine resting on my lap like an executive jet that had just made an emergency landing in New Guinea. It seemed absurd. How could I marshall powers of description when comprehension itself was overwhelmed?

So I pulled out the camera and then looked at it, embarrassed. A camera. Right. Even though this was some of the most concentrated beauty of the entire journey, I couldn’t bring myself to wrap a little frame around it and write “Southwest Colorado” on the back.

It’s quite possible to caricature beauty, of course, and there are photographers, artists, writers and musicians who do an impressive job of plucking people from their environs and dropping them into the middle of fantasy, but still—there’s nothing like relaxing and letting perceptions have their way. There is nothing like wonder.

I put away the hardware, for it had begun to seem a bit presumptuous. I sat, wandered, sat, climbed, and sat some more. But mostly I just looked.

My brain couldn’t even hold it all.