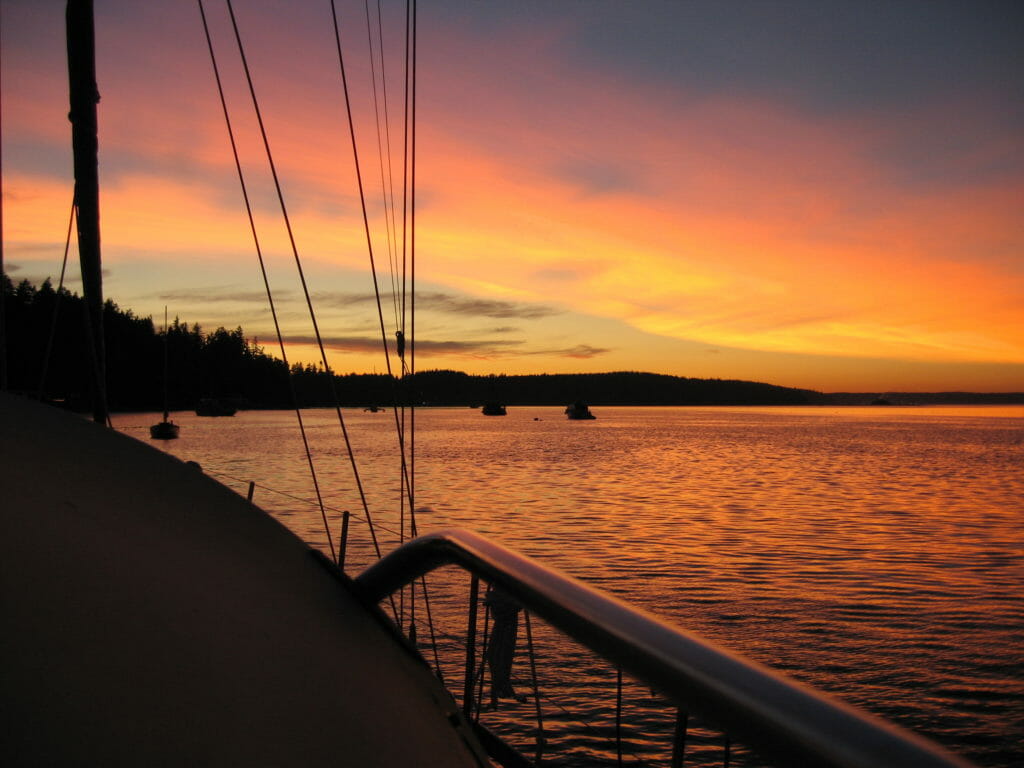 I miss the mental simplicity and steady progress of only working on one thing. I reminisce about Epic Projects of yesteryear, and they all seem to share the single characteristic of being grand obsessions so all-consuming that the rest of my life was relegated to meatspace maintenance and the bare-minimum business of hustling for cash to stay marginally afloat. Clear. Focused. Irresponsible, but who cares… the project grows.

Things are different now, and it’s exhausting. What I want is to be immersed in the ship with a departure plan clear in my mind, living in a haze of solder smoke backlit by software-driven blinkies, mechanical systems humming away in the background, the to-do list steadily shortening, test-jaunts as simple as casting off docklines and taking her for a spin. In some ways, that’s even more compelling a vision than sailing off into the sunset; nothing like getting my geek on with that old envelope-pushing passion.

But the current reality is strangely orthogonal, as I attempt to multitask a dozen projects at once: aboard the boat, in the lab, on the computer. It’s all fun; every little invention is a delight… but there are so many of them that I lose track of design documents on my own hard drive and get a wave of guilt when passing shelves laden with new toys. I’ve even declared a moratorium on acquisitions until I can put more of the previous ones to use and clear some mental shelf space.

Part of this is the huge lunge needed to claw my way out of the mire of complexity that is this land-based lifestyle, and it’s not just the relatively trivial problem of dumping a household to go cruising. Hell, that’s the easy part, even with the new vegetable garden, a loving mate, and her dog:

The hard part is the Microship lab, which is not micro at all: 3000 square feet packed with geekstuff from previous techomadic endeavors. When I walk around with a clear head, I realize just how little I actually use… so the Polaris mobile lab project continues to occupy center stage despite the seductive allure of Nomadness rusting slowly in the sunshine. The carpentry is almost done (today I wrapped up fabrication of 12 hinged panels that make the 45° jump between wall and newly insulated roof, providing a cable channel for all the benches). Once I distill the tonnage into a sleek 320 square-foot portable system, on-site boat projects should be less hobbled by the constant need to make 3-hour runs back to home base.

Since I also have to make a living while all this is going on, that project is starting to accumulate enough information for another book… a detailed how-to on turning a stock Wells-Cargo trailer into a mobile shop, with sections on carpentry, power, security, benches, inventory, and so on.

Of course, everything feels like a potential publishing project now; the Reaching Escape Velocity book is finished and available… a surprisingly smooth process. That’s an Amazon link there in the previous sentence; it can also be ordered from my online store (signed if you like).

This information should help many projects get off the ground… the arts of working with sponsors, media, and volunteers are discussed in detail, along with the, um, obsessive focus on a massively complex undertaking that is the, um, yeah, the most important single thing you can be doing. I think I need to re-read this and apply it to Nomadness development!

Now that the weather is frankly gorgeous, I should be aboard every day working on ship projects… but instead I am in the forest, hustling to get the mobile lab ready for deployment. There has been some progress, however.

The most urgent class of tasks at the moment involves issues that impact my ability to cast off the lines and go for a sail. One of those was trivial-but-maddening: tool drawers that flew open at the slightest hint of roll, slamming to the extreme of travel and back with every wavelet. Clearly unacceptable. Once, long ago, they had clever plastic spring-latch assemblies embedded in a finger-hole nacelle, but both that and the corresponding strikes are no longer viable.

The redneck solution (pillow and duct-tape) got me through last season, but that’s just embarrassing. Given all the constraints (not be an ankle-biter, not require major surgery, not be too expensive, not be ugly), the answer took longer than expected to emerge… but it was my favorite sort of fix: use something already in stock!

All it took was a pair of Southco soft draw latches:

These things are great – they are soft and pliable, easy to use, and even look pretty good. Technically, they are not pulling in the right direction for use on drawer faces, but I’m confident that the problem is solved.

Speaking of problems, I’m dealing with a couple of lighting issues. The first is the junk “Solar LED RailLight” that not only rusts in a single season, but has poor-quality mounting hardware, batteries that don’t make it through the night, and non-marinized components. One of mine came with a cracked globe and missing screw… I would call this a good idea cheesily implemented, and is thus a total waste of money. I thought I was going to relocate my pair to the garden after deciding they aren’t boat-worthy, but they didn’t survive being wet and neither one works… so off they go to the dumpster:

The second lighting-related annoyance is actually from a manufacturer that I have respected for years – AquaSignal. I used their lights on the Microship with Luxeon LED retrofits and 350 mA constant current sources, and naturally looked to their new Series 32 when preparing to replace the old incandescents.

Well, It’s the most astonishingly fragile assembly I’ve ever seen in this product space, and the instructions are useless.

Apparently, they expect this to stay rooted to the harsh stern environment with only a little expanding plastic bushing on one side, and nothing on the other but the friction of the wire-exit tube. Behind the gasket, it is potted; there is no mounting base (the substrate is actually very well-made and substantial, but I suspect drilling an extra mounting hole is not what they had in mind). I’m suspicious of the wire exit, which appears to have a capillary path to the interior… though when I peek inside, I suspect there is enough potting.

Short of bonding this in place with 3M 4200, which may be the best move, I was so convinced that I was missing some intended mounting scheme that I even posted to Cruisers Forum in the hopes that I’d be derisively pointed to an obvious RTFM-ish solution. No such luck. Other people have been gluing them on as well. Not quite sure what the company was thinking, but despite excellent light output, I cannot recommend these:

Next up: fabrication of the stainless cage around the woodstove (all parts on hand), mounting the bracket for stowing the dink’s petite little outboard, fixturing the water heater behind the shower enclosure, extracting the last of the old watermaker for the fellow who bought its pump on eBay, mounting the shore-water entry where the old water heater stack exited, and starting the power system retrofit.

A Paleo-Techomadic Take on Location Independence

In my previous post, I mused about the sudden interest in something that has been central to my life since 1983… a number of variations on what is basically full-time travel augmented by geek tools that are now universal (and a way of thinking that makes it sustainable). Some people are even monetizing this, selling books, courses, coaching, and other materials… and indeed, when I look at how much of a conceptual leap it must be from the perspective of a life of employment, I suspect there is a market. I know that my 1993 “First Steps” document helped get a lot of people moving, and it even presupposed a set of technomadic urges. It really is simple in principle, but there are countless technical details that are not at all obvious, and it is good to see the aggregation of tips and techniques.

I’ve been asked a few times if I’m annoyed that young pups are claiming to have just invented something that I’ve been doing for 25 years… but actually, the answer is no. The only irritating part is an occasional lack of historical perspective, but that’s easily adjusted with blog comments and community participation. Otherwise, I think it’s pretty cool that this toolset (both technical and intellectual) is finally accessible enough to become a trend, and the hype will probably calm down. I can think of four good reasons why someone might be motivated to contemplate full-time technomadics:

I’m looking forward to seeing how this all evolves, now that one can realistically accessorize their preferred travel style with the tools necessary to be truly location-independent. I will close with a bit of self-indulgence… a link to the complete scan of my article in the August 1984 issue of Popular Computing, 25 years ago. This was a fun one, and really captured the feel of this new way of life.