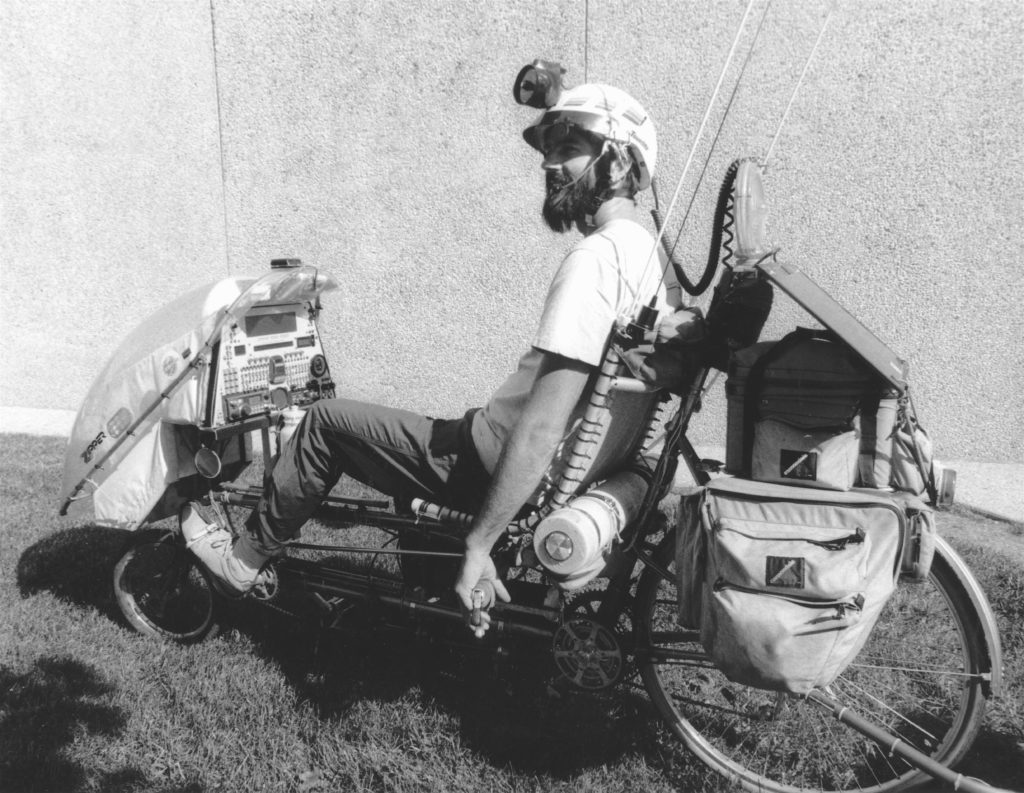 GEnie was my network connection through the entire second epoch of the adventure, and as we made our trek across the northeast and turned south toward Florida it was exciting to visit the company facilities in Rockville, Maryland. It yielded some excellent Winnebiko II photos, the short ESPN video embedded below, and the article in the Gaithersburg Gazette that follows. My narrative of this part of the trip is in the Technology Update.

Steve Roberts, a 35-year-old free-lance writer from Dublin, Ohio, pedaled his 260-pound recumbent bicycle into the Rockville-based General Electric Information Services Oct 9 to meet with the company whose computer system allows him to call the world “one big electronic neighborhood.”

Fourteen thousand miles ago, Roberts was looking for a way to combine several things that he loved to do. In 1983, he decided that moving his life onto a bike seemed like the way to do it.

After trying to design his own recumbent bicycle, he decided to have the frame made by a special company, and began the continual process of equipping the bike with the electronic hardware he needs to communicate with the world.

From the seat of his recumbent bicycle, Roberts communicates with the world with the use of five computers, a ham radio and a citizens band radio.

“The computer is my link with the universe — I very seldom use the telephone for voice messages. A portable computer and a PC network like GEnie [General Electric Network for Information Exchange] provide all the communications I need,” said Roberts, adding that the radios fill any gaps in that communication.

Roberts can type messages or text through the use of a keyboard buried in the handlebars of his bike. There are eight keys that type in a type of binary code.

He writes a weekly column on GEnie and freelances articles on various subjects including traditional business articles, technical writing and random subjects. His book Computing Across America: The Bicycle Odyssey of a High-Tech Nomad is coming out this fall. Maggie, his road companion for the last 4,000 miles, prints a recipe column in their monthly newsletter, the Journal of High Treknowledgy.

“People from all over the country contact me to talk or to invite us to stop by their place if we are in the area. It’s very important to have that kind of communication because it keeps it from seeming so lonely out there,” Roberts said.

His main computer is the Hewlett-Packard Portable PLUS with 896K of memory. Computer number two was originally a Radio Shack Model 100 and now upgraded to 256K with an additional Traveling Software’s Ultimate ROM. The third system is the “bicycle control processor” based on a 32K Motorola 68HC11 board. Number four is a speech synthesizer that speaks any text file transferred to it. The fifth system is a “terminal node controller,” a Pac-comm product that handles packet data communication by radio.

Solarex, another Rockville firm, donated a pair of 10-watt solar panels to Roberts to power all the electrical equipment on the bicycle.

After being on the road for four years, Roberts has also become something of a bicycle-safety advocate. He and Maggie both don bike helmets. They use orange flags, strong lights, horns and many reflectors on their bicycles.

Roberts prefers to use bike trails if they are available but said that the ones in the Washington, D.C., are “some of the worst.” Both Roberts and Maggie quickly added that “the people here are some of the nicest we’ve met. It’s surprising for an Eastern city.”

After biking up to the Frederick Solarex plant, Roberts plans to travel into the South and Southwest to spend the winter.