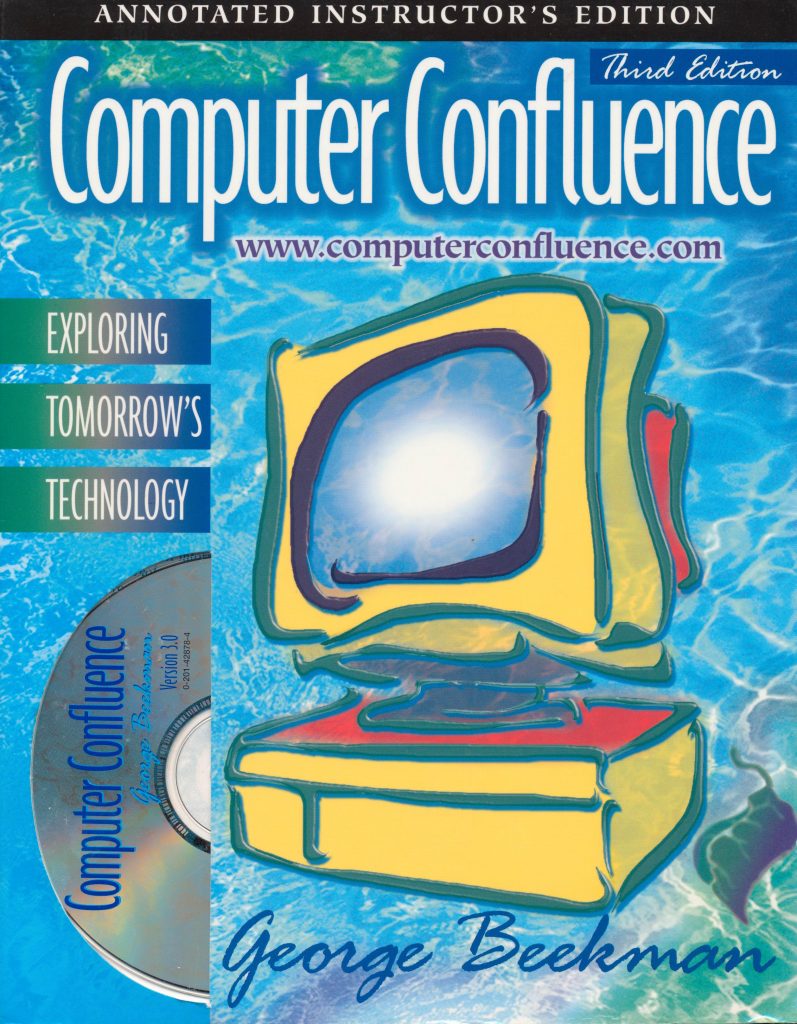 I was delighted to have a 2-page spread in this 1998 Prentice-Hall textbook aimed at computer literacy and information technology… as an old drop-out, it has always felt subversive to see my technomadic adventure taught to students. In the decades since, physical location has indeed become much less relevant; it is hard to remember how insanely radical this was, not so very long ago.

This book was aimed at introductory computer science classes as well as high school and self-study readers on a quest for “computer literacy,” back at a time when the fundamentals of life were changing fast. It was an ambitious goal, with corresponding web site and CDROM resources, and it’s actually quite good… about 450 pages plus support files covering a very wide range of the 1998 state of the art. (An earlier version was called Computer Currents, and it looks like publication continued through the 7th edition in 2005.)

Future society will be virtually paperless, energy-efficient, dependent upon wide-bandwidth networking, and generally cognizant of global perspective through routine communication across decreasingly relevant borders. It is not too early to prepare for this: We need the ideas, the tools, and an awareness of the problems that accompany fundamental shifts in the meaning of information.

In 1983 Steve Roberts realized he wasn’t happy chained to his desk and his debts. He’d lost sight of his passions — writing, adventure, computer design, ham radio, bicycling, romance, learning, networking, publishing. He decided to build a new lifestyle that combined those passions.Six months later he hit the road on Winnebiko, a custom recumbent bike equipped with a tiny Radio Shack Model 100 laptop and a small 5-watt solar panel. He connected each day to the CompuServe network through pay phones, transmitting magazine articles and book chapters.

Three years and 10,000 miles later Roberts replaced Winnebiko with Winnebiko II, a low-riding, high-tech bike with special handlebars that allowed Roberts to type while riding down the highway. Roberts pedaled 6,000 miles on Winnebiko II, this time with a traveling partner named Maggie Victor. Roberts writes of this period:

Through ham radio and computer networking, the sense of living in a virtual neighborhood grew more and more tangible, until the road itself became merely an entertaining backdrop for a stable life in Dataspace. . . . Home, quite literally, became an abstract electronic concept. From a business standpoint, it no longer mattered where we were, and we traveled freely, making a living through magazine publishing and occasional consulting spin-offs, seeking modular phone jacks at every stop.

After three years technological advances lured Roberts off the road to design and build a new high-tech people-powered vehicle. With 150 corporate equipment sponsors and 35 helpers Roberts constructed the $1.2 million BEHEMOTH (Big Electronic Human-Energized Machine . . . Only Too Heavy) — a 580-pound, 8-foot recumbent bike with a 4-foot trailer. This showpiece of future technology carries seven networked computers, a ham radio station, satellite links, a cellular phone with modem and fax, a CD stereo system, water-cooled helmet with a heads-up virtual computer display, solar collectors, and six-level security system. (It can even dial 911 and say, “I am a bicycle; I am being stolen; my current latitude is…)

After pedaling 17,000 miles on techno-bikes, Roberts started having dreams of “life with no hills” and turned his sights to the sea. His latest project is Microship, “a high-tech multihull with an extensive network of embedded control systems, a satellite Internet link, console Macintoshes, ham radio, 1080 watts of solar panels, deployable kayaks, self-trailering capability, on-board video production, and whole new levels of technomadic gizmology.”

Roberts mixes travel with consulting and speaking engagements, all the while connected electronically to the support facilities in his laboratory. He sees his travels as a mixture of business, experimentation, education, and, of course, adventure. In his words, “There’s a LOT of world to explore out there. Having had a taste of it, how could I spend my life in one place?”