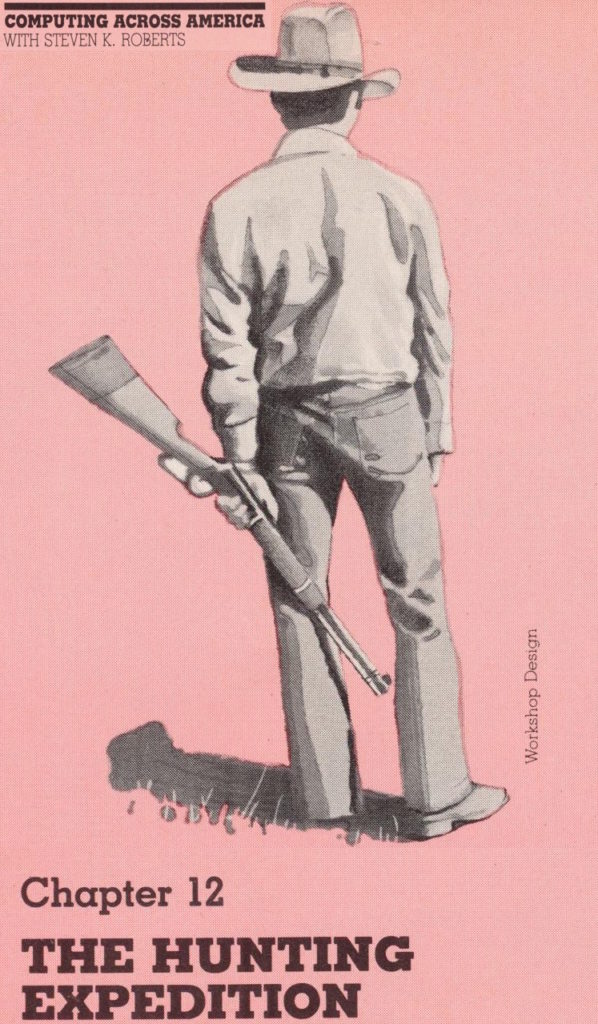 This odd little non-sequitur was one of my favorite examples of what I called the “lifestyle sampler” that resulted from spending a year and half on the road, staying in peoples’ homes. Through a fortuitous error and the magic of media, I ended up getting to know two wonderful people… both of whom are sadly no longer with us. The memory of this vignette is dreamy, echoing across the decades, with a sense of wistfulness even about something that is very far from my usual reality… hunting.

Nothing in my imagination could have prepared me for the potent combination of earth and sky that awaited me in New Mexico. It’s not that Texas and all the preceding coastal plains were dull or anything — it’s just that a horizon that causes a crick in the neck is a bit breathtaking in contrast.

So is the lack of oxygen. Water boils at 182 degrees Fahrenheit here in the Sangre de Christo mountains, and the lungs struggle to provide what the heart demands — especially on those hills that go on for mile after mile. The net effect of all this was, upon my arrival in Pecos, serious exhaustion.

A night’s sleep in the Wilderness Inn took care of that, and after a hearty Mexican breakfast I set out for Santa Fe. But first I wanted to visit the owner of a little shop in town, for I had promised him a look at the bike. I rode down a long gravel drive and knocked at the wrong door. A hungover, unshaven skinny guy answered, rubbing his eyes and squinting at the daylight.

“Hey, didn’t I just read about you in Popular Science?” he asked, looking past me at the bike parked in his yard.

“Come on in! I didn’t think there was more than one recumbent bicycle with solar panels around! Want some coffee?”

Thus began a most entertaining three-day visit with John Wyckoff and friends. John, clad in his Stetson Waltham, oxford shirt and tan trousers, looks something like a cross between a thin gangster and a west-coast engineer. He’s a quintessential generalist, with heavy experience in gunsmithing, speaker design, photo processing, model airplanes, trout fishing, bicycle racing, jokes and the handcrafting of fine musical instruments.

I was kept busy the first couple of days making notes as John poured forth his diverse wisdom:

“They told us that LSD would cause chromosome damage, and now we have proof: Hippies grew up and had punks.”

“Make sure you tell all your readers that I’m looking for a two-speed Ford rear end.”

But the most colorful experience of my stay was the hunting expedition. John’s a gun wizard — he markets his own breed of personal protection handgun ammunition called “Onslaught,” and can talk for hours on the fine points of competing match rifles. So it was only natural that we should stride forth into the arroyo one afternoon, armed with .22 rifles and seeking rabbits.

Through muddy ravines we went, then over rocky ridges tufted with wiry grass, and into an open area criss-crossed with rivulets and abuzz with wildflower-plundering bees. At the slightest suggestion of life, we went into stealth mode, but not a shot was fired.

At last we saw them. Not the rabbits, for they slept away the muggy afternoon in damp burrows: not the squirrels, who were — somewhere — still. No, not that furry game at all, but waterbugs, hundreds of them, darting like tiny saviors across a pond’s brown watertop. They seemed unaware of our presence.

We crept to the top of a gravelly rise by the water’s edge and stood for a moment, assessing our prey. I heard John’s safety click, and in my peripheral vision I saw his rifle slowly rise. There was a pause, and I caught my own breath in sympathy with his. The trigger finger moved almost imperceptibly.

An explosion rocked the valley, echoing off distant walls — suddenly the only sound but for the “kerchunk” of the bullet’s impact. Some where down there, fragments of a waterbug tumbled in confusion through the churning water.

In seconds, all was again still. The others had skittered away in panic, but their memories were short and their perceptions limited. They drifted back with dumb, almost random purposelessness.

My moment had at last arrived. I was about to take a life, not in the innocent fashion of flattening a freeway caterpillar; not in the justified, vindictive fashion of a mosquito swat. This was in cold blood — and it raced within me as my thumb clicked the safety and I brought to my shoulder the Browning T-Bolt, equipped with a Leupold 1-4 sight on Redfield mounts and loaded with .22 caliber high-velocity rounds.

I picked my target. My eyes narrowed to fierce slits; my hands steadied their grip. There. In the crosshairs. There he was.

Frozen in mute terror, he regarded me with huge, baleful eyes. I was torn painfully between my brotherhood with this creature and the undeniable adrenalin-pumping thrill of the hunt. But John stood waiting. I could not turn back. For a long moment the waterbug and I looked at each other in silence, then my finger started to close.

And in a flash, it was done. In a single sharp percussion, a 40-grain bullet traveling at 1,250 feet per second struck him in the shoulder with over 180 foot-pounds of relentless energy, scattering his frail body to the winds and the depths. Where once was a waterbug plying the pond in pastoral gentleness, there was now a liquid crater and a shower of muddy water — and somewhere in there a pulverized, demolished denizen of the Pecos River Valley of New Mexico.

As one, needing no comment, we turned and set off into the darkening arroyo, thoughts of burritos and beer filling our heads. When we arrived at the familiar home, passing the ruins of an outhouse and the gleaming white ’69 Lincoln Continental in the driveway, John’s wife’s face appeared anxiously in the window. One look in our eyes and she knew — then her face softened in a dimpled smile as the day ended and the evening began.

Editor’s note: Steve Roberts, Online Today’s nomadic journalist, is currently traveling around the United States on a recumbent bicycle. He uses a Hewlett-Packard 110 Portable for both writing and communications. During this trip, which is expected to cover 20,000 miles. Roberts is writing regular columns for Online Today, as well as a book entitled Computing Across America, which will be published in 1985 by Simon & Schuster.