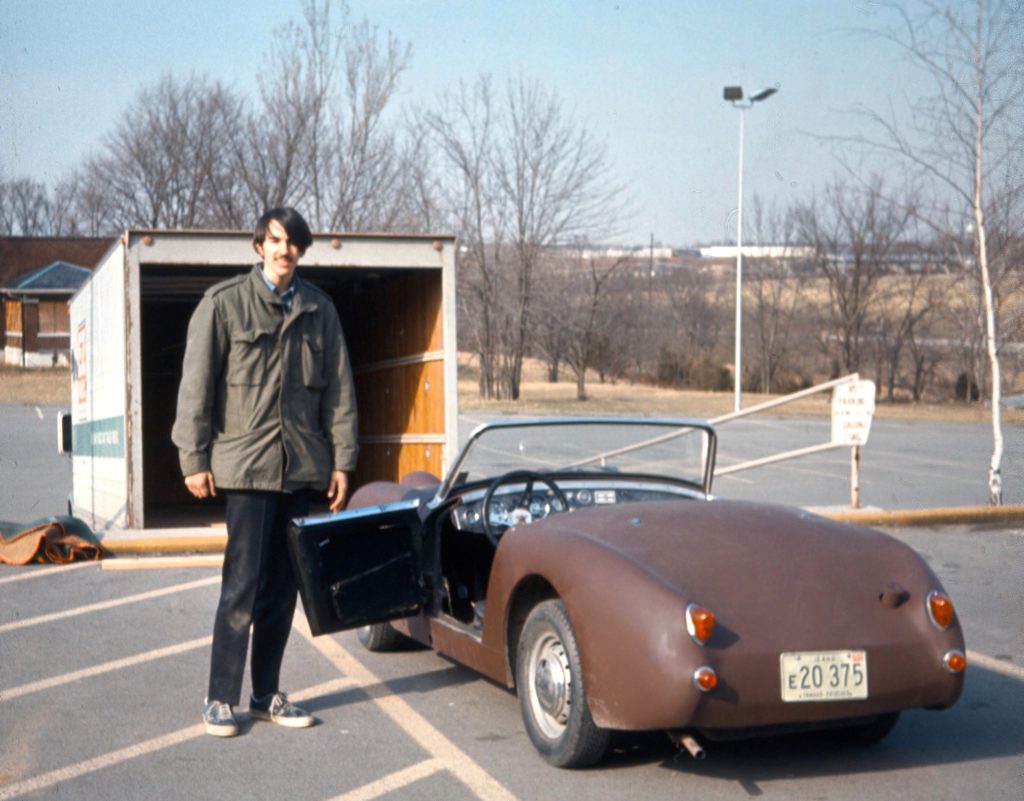 1972 was a strange year for me… as a geeky 19-year-old college dropout in the Air Force, I was hardly on the sort of career path that I had imagined. The Vietnam War was in full swing, and I was stationed in Mountain Home AFB, Idaho… doing avionics maintenance for the F-111 fighter aircraft.

Of course, my life was anything but routine. I converted my dorm room into a laboratory, leading to endless head-butting with authority figures, and I was obsessively learning RTL/DTL and other then-current device technologies. I devoured trade journals, bought the exquisite HP-35 calculator, spent hours listening to shortwave radio, explored consciousness, read constantly, and kept up correspondence with distant geeky friends while becoming a thorn in the side of the Air Force… with significant implications over the next year.

This is a letter to my father that reveals some images of that time; I had invented an arbitrary waveform generator, and this is the only document that has survived the decades. He had many patents with General Electric, so it was fun asking for advice. It’s also a snapshot of life as a closet hand-to-mouth übergeek during the Vietnam era.

Yes, I guess it has been a long time since I last wrote. Quite a bit has happened, specifically, I am starting to get some things accomplished. I am, that is, when I am not wasting my time over at the shop playing Air Force.

I have spent this week on leave, a fact which always amazes people because I have been in the dorm the entire time. I took a leave so I could get some work done. The Synthesizer is coming well – this week I designed and built the regulated power supply for it (3.2 volts plus or minus 2% over a 20% power line variation – less than 1 millivolt ripple) which works well, in addition, I developed a more or less modularized level control system which is built into the expression pedal. Automated dynamic swell.

The design for the “Waveform Synthesizer” for lack of a better term as yet, is progressing well also. I do not recall whether or not I elaborated upon its function to you, but in case I didn’t, it is basically a device for producing virtually any periodic waveform from a graphic input. Operationally, you set up the desired waveshape on a panel in which are set 48 vertically sliding controls, each coupled to a linear taper potentiometer. (I have contacted a Japanese linear pot manufacturer and requested a quotation on custom designed units to meet my specs, thus eliminating mechanical “rack and pinion” linkages, but no answer yet.)

The information set into the pots is then digitalized to a high resolution and scanned by a shift register whose cycle frequency is 48f (f = output freq), the register’s outputs then beinng algebraically added relative to time and amplified. Following this, elaborate filtering is used to “round out” the waveform. At first the design for this was rather haphazard, but it occurred to me that brute force filtering may very easily eliminate transients, so now I am using a pickoff from the pots, integrated, to tell the final processor what the slope is between any two given segments. The correct filter function is then chosen by digital circuitry, and the signal amplified again, then outputted.

I feel that it has excellent promise. I have never seen anything perform the same function except a large scale digital computer, which uses full Fourier transforms to set up the wave. That also requires very elaborate programming. A child could operate my system.

Which all leads me to a question, actually two. First, what is the cheapest way to get a patent, and how can I ascertain that the Air Force gets no credit? Dad, I’d appreciate a letter on this. In what form do I submit the system? Is a working prototype necessary? Can I research it myself to save costs? I really know very little about the process. The only person I have talked to here about it was some idiot lifer over at Legal aid who l) thought it was very funny that I, a mere Airman First Class, should have the presumption to say that I had something I felt patentable, and 2) said that it would automatically belong to the Air Farce. Bull. I am sure there is a way.

My second question is where, oh where, can I get the money for the development of this system? Am I doomed to fail because I must operate on an Air Farce salary? R&D companies have thousands. I need at least one. Already I am on such a backlog for parts that within three days of payday I am out of funds for the next two weeks.

Items of highest priority on my present budget are

On parts and tooling so far for the synthesizer, I have spent $1007.78 – to the preclusion of movies, food, a pair of shoes (still haven’t gotten those! Sorry about that) etcetera. Those are of low priority when weighed against my work.

Perhaps it may appear that I am hitting it a little too hard, but not so. Though the going is rough, I feel an inner satisfaction that I have never before known. While people around me are falling victim to this ridiculous pattern, I am busting my gut and not having much fun, but enjoying it immensely. At least I am accomplishing something. If practical problems like those I’ve mentioned can be solved – I’ll be in fantastic shape.

A note on the major equipment: The car has not yet ceased to be a major headache – last Ford for me. After the fiasco from Keesler to here, I have had exhaust pipe replacement, starter rebuilt (I did that), much-needed tune-up, and now I lose one quart of oil per 40 miles. I get less than ten miles per gallon (much less), and have a crooked suspension. The only things about the car I like are the room and the comfort (those are actually integral). Once I get put somewhere by this crazy outfit where I’ll stay for a while, I’ll get rid of the thing.

The Oscilloscope, on the other hand, is turning out to be a very wise investment. Though payments kind of hurt, I have found it to be an absolutely vital tool. The Beckman counter is in a state of acute dysfunction, but I just received a service manual from Beckman Instruments company so I should have it fixed soon.

(You may have noted that I just cleaned the type, at least superficially. It needed it. Incidentally, I am still using the same typewriter I bought from Mr. Kirk.)

As soon as I can afford some film and processing, I will shoot a roll of myself and the lab. Dad, you will be astounded by this workshop here, Except for instrumentation, it is approaching the ideal for my needs. From the tool board are hanging well over 150 tools, and it is very rare that construction requirements dictate the use of something I don’t have here in the room. The only exception, as I mentioned, is printed circuit fabrication. At the moment, I can produce PCs, but crudely. The forthcoming B NEG system From Bishop Graphics will alleviate the situation to the extent that I will be able to photographically produce any quantities from my production master, of moderately good tolerances. The ultimate system, coming by necessity as soon as the scope is paid for and I can take on another debt, will give me registration of .002″ over 48″ and is capable of two sided or layered boards of high density on virtually any scale. In addition, microcircuit components at the state of the art are now so inexpensive that thin-film resistors and such are already in my design. The “Waveform Synthesizer” is using new MOS and Low Level TTL technology that won’t hit the experimenter market for about two years. I have recently subscribed to Electronics magazine, and I find it fantastic. I had to give a title and a company to qualify for the professional rate – $16/3 yrs. Much worth thrice that. It’s right on top of the technology.

Oh – one way I may chance to make some money, if things go right, is in the USAF Suggestion Program. Though the rewards are but a fraction of the amount the Air Farce saves, it can be as high as $1500. The idea upon which I am working and on which I have received much encouragement here is a new mission data entry system for the F-llls. At present, the process of “Loading Tapes,” or programming the aircraft’s computers for the mission, is ludicrously inefficient. It requires at least one man-hour per plane (three people for twenty minutes), the application of three units of ground equipment, and much fuel and equipment time. I have proposed to replace all this with a little cassette deck mounted in the cockpit, in which the pilot drops a cassette containing the required data when he goes out to fly the thing. Moderate initial expense for the air force – substantial savings for as long as the F-lll is used. I submitted it once, and it come back saying “Very Good – now design it.” Ulp. More time, but I think it may bear fruit, if the tightfisted warlords of this outfit can see that it will save money. They may balk at the initial expense, however, so I can’t count on anything.

Still nothing, nor do I really expect it, on the switch to Wright-Pat (or, I should note, any other research installation). The situation is taking on a certain urgency, though, because in about three months, our unit, relatively new, will be considered Operationally Ready, and thus liable for shipping to a “Circus Zone” or some such absurdity, namely Vietnam or that region. That’s all those fools think about. Things would be so much better if people used their heads.

I guess I better start the last paragraph. My typing muscles seem to be misfiring more often (!) and I promised myself I’d design an active filter tonight before going to bed. For the synthesizer. It is fantastic to have something to focus on. I no longer fritter away my time on countless little things.

Oh, by the way, a John Hancock life insurance man talked to me the other day. $15,000 policy is about $21.00 a month. Do you think I should get it? I’ve heard the sales pitch and it sounds reasonable, but I am reluctant to spend my money because I see so many businessmen duping GIs. So I’d like some advice on that.

The country here is beautiful. Next letter I’ll elaborate. Must go.