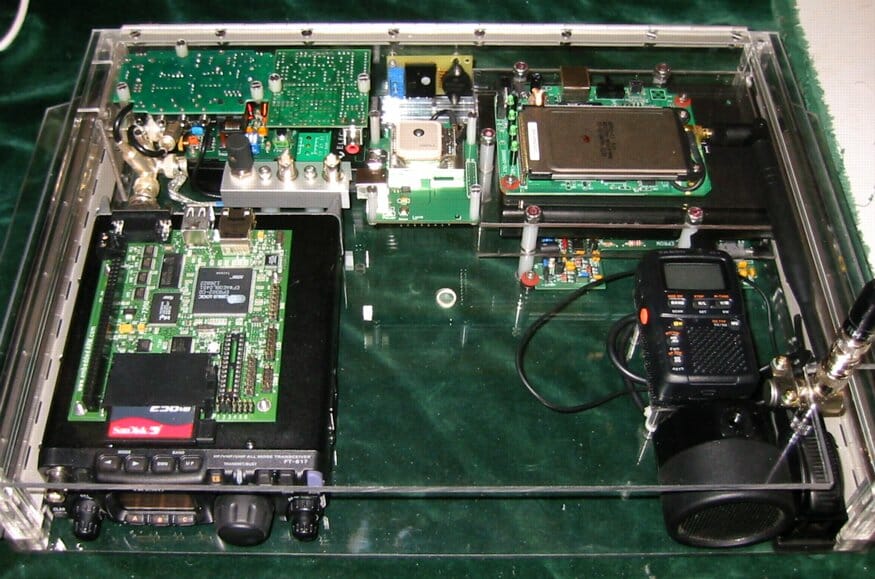 This snippet from the old Microship blog (in the Blogger platform) captures the approximate moment when I started working on the platform-independent toolset that came to be called Shacktopus… something that can best be visualized as the equivalent of a 2012-era smartphone but weighing about 15 pounds and looking like a very fat laptop. In fact, for a while I was calling it a “communications laptop,” and in mid-2005 presented it at the Seapac amateur radio convention. The photo above is from a few months after the post below.

You know, I’ve been making a career of nomadness for over 21 years now… I’m starting to feel like a technomad emeritus, sitting back and taking long philosophical views while excessively complex machines languish in the cold lab. But I did a posting to the Nomadic Research Labs forums today, discussing motherships, and that got me thinking about the various ways to do this (whatever this is; that is itself not clearly defined, although I must say, it sure feels wonderful when you do it).

When I took off in 1983, you see, it was aboard the Winnebiko… a sleek and minimalist expression of the essential technomadic ethic, a suite of tools that rendered physical location irrelevant. This morphed a few years later into the imaginatively named and much more capable Winnebiko II, and eventually into the monstrous BEHEMOTH… 580 pounds of hard-core gizmology valued, according to some estimates, at $130/ounce.

In 1992, burned out on the road and lusting for water, I launched the Microship project, a variety of nautical pedal/paddle/solar/sail substrates that have occupied me for over a decade… proving the old adage that the average completion time of a homebuilt boat is 137 years. Overlapping all that, I wandered the US in three different motherships: a converted school bus, a 20-foot mobile lab, and a huge 44-footer that, like BEHEMOTH, helped me map the point at which a good idea ventures into the realm of excess and madness.

But you know what’s turning me on most right now? Not Bubba, the geeked-out kayak that keeps me sane here on the island; not even Wordplay, the amphibian micro-trimaran that has gobbled all available resources for longer than I care to remember. No, it’s the manpack-scale, exquisitely personal, almost stealthy toolset that allows a nomad to survive and stay in communication in any context whatsoever… whether aboard a custom substrate like mine, hitchhiking on OPBs (Other Peoples’ Boats), riding public transport, or sojourning on one’s own feet. I started thinking about this when looking at a photo of BEHEMOTH recently and wondering how much it would weigh if I were to rebuild it today with equivalent functionality. I realized with a shock that I could probably fit everything into a backpack and still have room for my toothbrush and a set of high-tech foulies.

Of course, none of this is to suggest that I’m willing to eschew our graceful fleet of ships that, Real Soon Now, will again dance across the watertop in a pas de deux of sun and spray, bones in their teeth, sails taut and solar panels a-sparkle. No, I’ve gone too far on this project to be stymied by the lifestyle gotchas of recent years, nor even by the still-daunting to-do list. There’s an enticing and realistically scaled expedition on the horizon, not to mention an almost visceral desire to reclaim from these vessels a level of pleasure consistent with the staggering amount of time and money that has gone into them.

There’s something else afoot… and I think it has to do with technology that has at last reached a level whereon I can realistically cram all my geek passions (and tools, and archives) into a backpack. Only a decade ago, I was designing massive pressurized rackmount enclosures to support a suite of perverse gizmological desires, and this shaped the substrate to the point that I lost sight of its essential human scale and bought the 30-foot folding trimaran that distracted me for 2 years. Now, I think I can take the whole system for a walk, and watch it incorporate additional communication, control, and data-collection resources when I’m sailing or kayaking… or lying in bed.

Since we find ourselves at a moment in human history when we honestly don’t know whether to maximize or minimize mobility, this comes not a moment too soon.