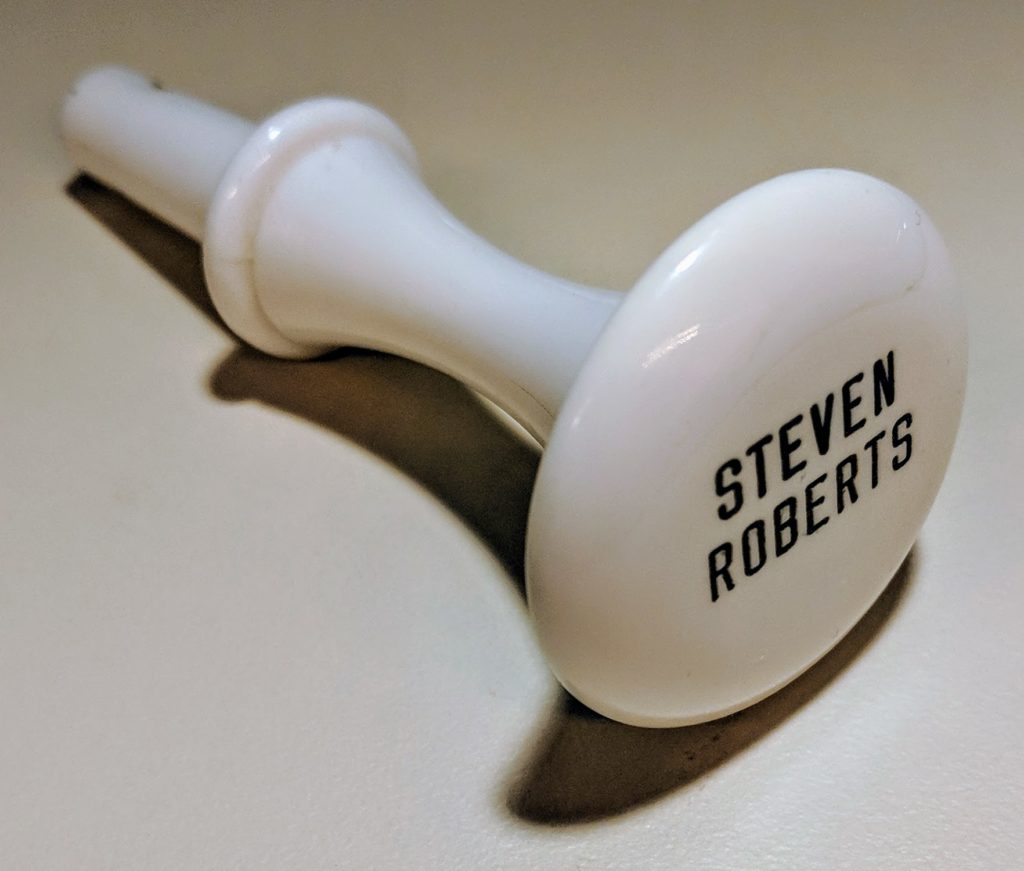 It has been a time of long roads through cornfields, of unexpected happiness in small-town America, of music, sickness, dreams, ham radio, and still nights so hot that there’s relief in the tiny breezes of mosquito wings during final approach. Between New Orleans and North Dakota, we have been living an interlude, with odd delights where we expected only parking spaces and cats underfoot like a starship full of Tribbles.

And ya just never know what you might find in a small town. Take Highland for example: this town of 7,500 in the western-Illinois flatlands hardly seems the kind of place that someone (even someone from Marissa, another small Illinois town) would be inclined to label the “eighth wonder of the world.” But when we rolled past the tidy town square and found our way to Wick’s Organ Company, we were at the gateway into another epoch.

I should note that this town — an old Swiss settlement — has a couple of unusual characteristics. First, it’s the very definition of Americana, with Friday-night band concerts in the square and a year-round succession of events designed to strengthen the already-tight bonds of community (in the classic sense). Second, it thrives economically, with 12 significant industries in town run by old childhood pals. They help each other so much with various technical specialties that few depend upon the nearby megalopolis of St. Louis… which is where we were headed.

“But you can’t come to southern Illinois and not visit Wick’s,” Bob Heil, K9EID had said. Unconvinced, stressed, and conscious of passing time, I took a 50-mile detour, parked the bus in their back lot, and walked into the office.

Within the hour I was immersed in classic craftsmanship, beauty, music, and a quality-obsessive work style rare in fast-buck America. This is the world’s premier pipe organ company, and every detail is hand-turned and perfected by people whose love for their product shows in every touch. Does this seem an anachronism in this day of MIDI-ported Macs and magical Kurzweils? Do ranks of pipe, bundles of cable, and massive mechanical pressure regulators remind you of 12AU7-based computers and Collins S-Line ham gear — classic machines better suited to old men and collectors than to those serious about new musical instruments? Heh.

A few days after our plant tour, we sat flanking Barbara Wick at the console of the pipe organ built into the basement of their home. This was a return trip to Highland after two days in frenetic St. Louis, and I had the temerity to call on the bike’s phone and request a performance of Bach’s Toccata and Fugue in D-minor to fuel our spirits for the trip to Oshkosh. Modestly, she hemmed and hawed, not thinking me serious. But we rumbled up the drive an hour later, exchanged pleasantries, and kept dropping hints.

And so the time arrived. She set up the presets, programming the more complex combinations of stops into a row of buttons between the manuals. She stepped on the swell pedal, and a wall of floor-to-ceiling glass louvers quietly opened in front of gleaming pipes in neat exponential rows. She peered for a moment at the intimidating piece of sheet music, issued a disclaimer, took a breath, and began.

Goose bumps played across my flesh as her fingers danced on the keys. We were inside the music, surrounded by the pure sensuality of a centuries-old passion. At times the sound was crisp, each note so distinct that it prickled and sparkled like a splash of iced champagne. At other times the notes were fluid, blending together like massage, like wind, like thought itself. She touched my emotions on many levels, evoking awe at the textures, wonder at the fugue’s complexity, respect for the artist… and deep longing for more.

There’s almost an ache to such beauty: the senses grow so thoroughly addicted to enveloping perfection that the mind begins to quail in terror at the thought of its withdrawal. Each time Barbara found enough of an opening in the demanding work to turn a page, my eyes flicked to its lower right to check for the dreaded double bar. I wanted it to last forever; I would have happily starved to death in that chair, uttering little whimpers of pleasure as the pipes played on, sinking slowly into perfect musical understanding, sensing the twelfth root of two in every half step, feeling the standing waves inside resonating pipes of lead and tin, brass and wood. My fingers would move in perfect synch with hers, the ghost of Bach would whisper musical insights — and as consciousness dimmed, my vision would vignette to a dreamy soft-focus image of my life, choreographed and poetic. I would die a musician, a smile on my lips… my last sigh indistinguishable from the chiff of the resolving tonic…

Sound like that is born of many passions, from a half-century of devotion on the part of the artist to genuine obsession on the part of the organ-builder. Martin Wick and his hundred or so employees hand-tool everything, even to the point (or plane) of pouring their own sheet metal to allow full control over its acoustical qualities. A pipe organ cannot be manufactured; it has to be lovingly crafted, tuned, and coaxed into sweet song. After dozens of high-tech plant tours, this one was a revelation — a glimpse into that romantic past we like to think we all share: a time of dedication to quality and pride in workmanship. I’m pleased to report that it still exists in many forms in many places… but most dramatically in rare places like this.

But poetry takes many forms. In Oshkosh, Wisconsin, we found ourselves surrounded by over 13,000 aircraft and nearly a million people… for this is the annual Experimental Aircraft Association fly-in. All week, we squinted into the 100-degree skies as aerobats danced through the air, as warbirds roared by in flocks of dozens, as frail little homebuilts plied the fluid of breath itself. The B-1 bomber made an appearance, as did roughly 10% of all the privately-owned airplanes in the world.

But the best jaw-dropping gasp generator by far was the Concorde, that delta-winged Mach-2 objet d’art that still, 12 years after its construction, defines the epitome of airborne grace. At 60,000 feet, flying twice the speed of sound, its skin temperature rises above the boiling point and the whole airframe stretches nearly a foot. Passengers idly drink and chat inside a 169-ton machine flying faster than a rifle bullet… some 1,300 miles per hour.

But it’s not the specifications that truly amaze, nor even the awesome roarwhine of its four jet engines. It is the delicate beauty of swept wing, the birdlike countenance, the sense that you are witnessing a kind of perfection. The Concorde flew around Oshkosh for four days, stealing the show, taking a few rich or lucky passengers on $800/hour rides. Ah, technology…

Yeah, there’s something about big machines. Back in Illinois, Bob Heil drove us out to the strip mines to watch a 30-story power shovel, the largest in the world, plunder the earth. Beneath it scurried dozers that in any other context would be considered huge, their sole job the clearing of rubble beneath the mighty tracks of the behemoth. Like the vehicle assembly building at the Kennedy Space Center, it was easy to deny the size of this thing by thinking it close. But with each house-sized mouthful of earth, the monster laid bare an ancient black layer destined for conversion to electromotive force, heat, and acid rain — feeding some back to itself via miles of conveyor and a dedicated plant… a coldly efficient engine of destruction, unstoppable, invincible. Ten stories up, a tiny cab held a human; ballfield-scale lights blazed on at dusk as the boom arced through Illinois sunset and the earth shook with tumbling rubble…

Oshkosh held us for three weeks exactly, about two weeks longer than we expected. It was an odd time… dreaming of the road, enjoying our new friends, planting seeds of the next journey… and trying to recover from an intestinal disorder that had me visiting gastroexitologists, whimpering in the dark, reading Macintosh magazines hauled back from MacWorld Expo in Boston and dreaming of the next bike.

But there were adventures. Tetris, epic fly massacres, an infestation of kittens, a schizoid dog, and glimpses of Wisconsin in heat. We came north not only for experimental aircraft but for cool weather, and like everyone else in the country we have been cheated, broiled, withered by the summer drought. Fly and mosquito wings bring momentary relief, alright, but that hasn’t dulled my passion for hunting them with rubber-bands… the only sporting way to kill the bastards. The deadly missiles zip spinning through the air like a replay of the New Year’s Eve battles in Eureka, only now the targets splatter rather than leap about with shouts of short-lived pain and threats of retaliation.

(By the way, you can wipe out whole populations of flies on a ceiling by simply walking around with a large pan of soapy water. Lift it under a fly… by the time he has gained enough airspeed to add a horizontal component to his flight vector, his wings are pinned by soap-slicked water and he drowns.)

We’re westbound now… and I’m trying to wrap up this chapter on I-94 in the wilds of North Dakota, aware of the fact that time sucks memories from my beach-head like a merciless riptide, smoothing the details into a gross approximation. New Orleans to North Dakota in one short chapter… it seems a riptide ripoff, but it has been a swirl of sickness and highway punctuated by moments of delight. Tetris has been a big thrill of late, a strangely compelling computer game that turns the unwary into addicts (I just broke 7,000). Venus Biscuit Snow’s kittens are two months old now — one has found a home with a New Age ex-nun in southern Wisconsin; the others, Tetris, Carrick, and Wafer, gallop madly about the bus in hot pursuit of each other, pausing now and then to sleep in a cuddly juxtaposition of pink noses and soft fur. My ham radio obsession grows; here in North Dakota I have set up the antenna twice and hailed the cosmos with a 2-watt whisper… working over 50 stations from coast to coast. Technomagic…

And those are the headlines. Next stop of any consequence… Portland. Then on to Seattle, for the first round of lab work on the Winnebiko III. My soldering iron itches.

Oh — a quick technological update. I have added a Spectrum Cellular “Bridge” modem to the bike. Now I can at last sign on from the road, and not spend my life in an endless quest for modular phone jacks and, failing that, pay phones.

Cheers from the prairie!