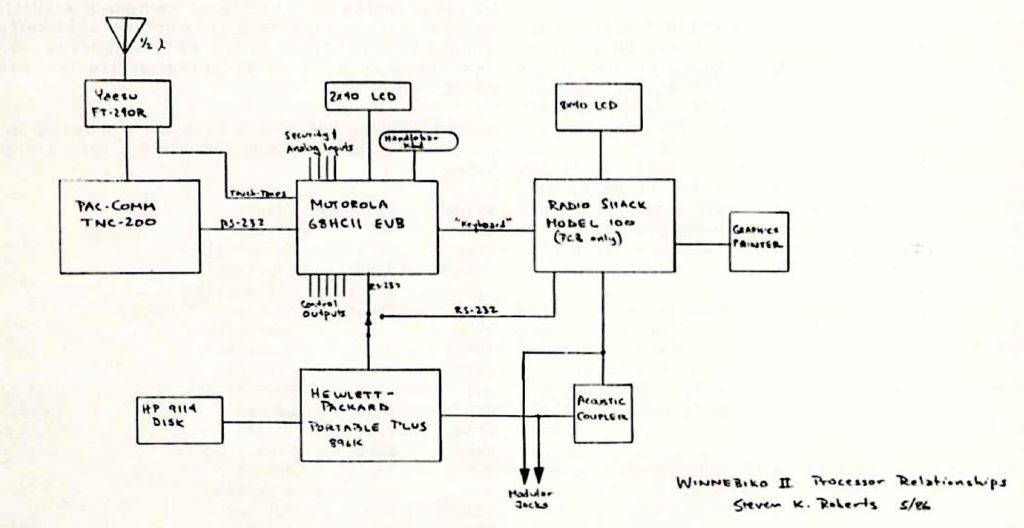 Packet Radio was a huge part of the second bike version; at a time before the Internet and cellular phones, it was amazing to have a way to wirelessly communicate with text. This was a subculture of the amateur radio community, and this special-interest publication picked up the story of my geeked-out bicycle. The console design had not yet begun, and the Winnebiko II evolved considerably over the next year or so. Thanks to my old friend Steve Stroh, N8GNJ, for holding on to this issue all these years and kindly letting me digitize for this archive… I believe it is the first tech article that describes the electronic systems of this bike version, and is thus historically interesting.

We have all seen or heard by now various forms of mobile packet radio. There is, of course, the packet stashed in the briefcase trick, packet in the car, packet in an airplane, packet on a steam powered passenger train (watch for the cinders), and we will hopefully see packet on a space shuttle in the near future. How about packet on a bicycle while traveling 20,000 miles across the U.S. and Canada?

Steve Roberts is a freelance writer who decided to abandon the comforts of his home and office to live the life a wandering nomad on a bicycle. Since Steven is not a wealthy man he has to continue writing and selling his manuscripts to finance his living expenses. Steven designed a bicycle that would allow him to carry the tools of his trade, primarily a Hewlett Packard Portable computer with outboard disk drive.

The bike is affectionately called the “Wonderous Winnebiko,” and has already logged more than 10,000 miles. Since the first 10,000 miles the Winnebiko has undergone some major technical redesign. The original 5-watt solar panel has been replaced with a pair of 10-watt Solarex units, and there is now a completely new electrical system. The most visible of the new components is what Steven calls the ICEbox. for Information-Communication-Entertainment.

The ICEbox which rests on a shock-isolated shelf roughly parallel to the plane of the old solar panel, is the control center of the bike. It contains three microprocessors, and it has a hinged front panel consisting of 5 liquid crystal displays. It is waterproof, and it folds up to expose the Yaesu 290, CB, shortwave receiver, cassette deck, broadcast FM, touch-tone pad, diagnostic panel, and a TNC-200 for packet radio.

The processors all interact as shown in Figure 1. The central controller is a 68HC11 board, which handles security, RS-232 data routing, handlebar keyboard conversion, and analog data acquisition (for the software battery fuel gauge, electronic compass, and so on). Text-processing and on-the-road file management are handled by an 80C85 board (the guts of a Model 100), which not only displays its activity on a 2×8 inch LCD but also talks to a tiny printer.

Packet communications are handled by the TNC-200 CMOS board which is connected to the Yaesu 290 and the optional 35-watt amplifier. The packet setup will share the spotlight with a traditional telephone modem as a communication link with the rest of the world. Steven anticipates considerable media interest in this mass of technology that enables him to maintain a stable social life while living on a bicycle. This is sure to spawn interesting stories, especially when Packsat goes online.

In between the daily grind of peddling the bike an writing articles for a cast of publications, Steven finds himself online on electronic mail networks. His network address and methods to read his progress and leave mail for him will be published in a future issue.

Steven will be departing from EXPO 86 in Vancouver in early September, accompanied by a companion on a similar vehicle. PRM will publish releases of Steven’s progress as they are made available. In the meantime, watch for KA8OVA/Winnebiko-mobile on packet.