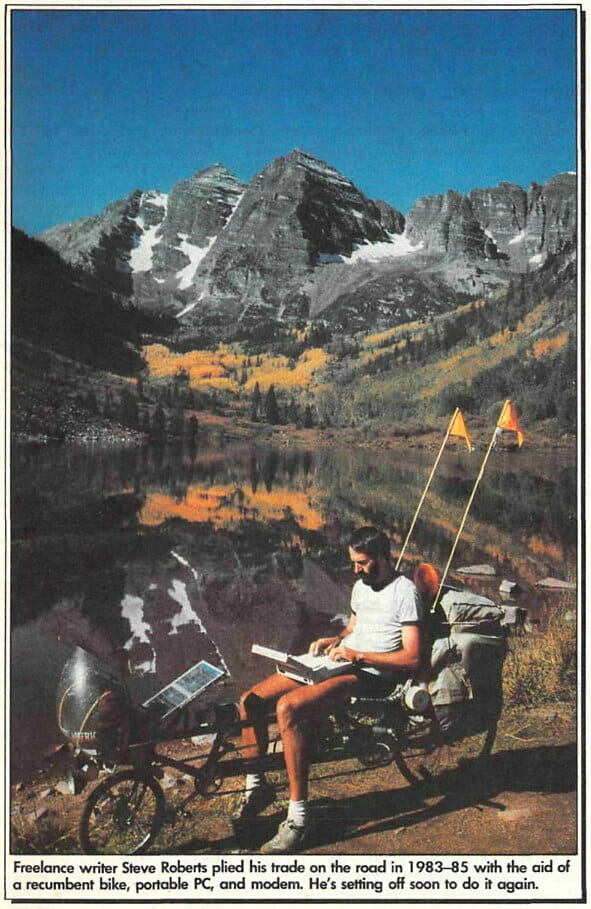 This is an account of my talk at the 1986 National Online Meeting in New York City, including discussion of electronic publishing, the upcoming Winnebiko II, and resumption of my computerized recumbent bicycle travels around the US. The publisher was a significant force in the early epoch of online information retrieval; this article was prepared by a staffer from one of my presentations at that conference.

The photo above was taken by Jeffrey Aaronson of Aspen, and shows me with the HP Portable on my bike at the Maroon Bells. This was the book’s cover photo.

Bicyclist Steve Roberts Readies For a Second Trek into Dataspace

What do you do when you finish one high-tech, 9,760-mile, cross-country, solo trip on a recumbent bicycle equipped with solar panels (which you financed by freelancing electronically along the way)?

You start planning and retooling for another one, of course. This one a higher-tech trek, with more computers, more solar panels, and more communications devices. And you take along a friend to enjoy “computing across America” with you.

That’s what Steve Roberts is up to these days. You remember Roberts—the freelance writer/marketing consultant who took his work on the road in the fall of 1983. He used a solar-powered Hewlett-Packard Portable Plus and a modem to write and send his stories, Dialog to do research, and CompuServe to communicate with his friends.

The computerized cyclist did some of his electronic freelancing for Link-Up and its sister publication, Information Today, and is working with Learned Information’s book editor on the publication of the saga of his first trip, called Computing Across America. Roberts also provided a light touch at one of the closing sessions of the National Online Meeting (NOM), regaling the audience with his adventures as a computerized cyclist and his thoughts on writing for phosphor, electronic friendship, and “compu-sex,” and disclosing the details of his second trip.

If all goes as planned, the 225-pound equipped bicycle that Roberts will take on his next trek may just make the first, 200-pound model look like a Conestoga wagon. (See the November 1985 issue of Link-Up for his article on the original odyssey.)

His rebuilt machine will have 20 watts of solar panels instead of the original five, and four computers instead of one. Roberts described the new set-up to the NOM session group: “The new electronics package is a whole aluminum machine enclosure out in front of me that has a front panel that’s hinged. It’s waterproof and has five LCDs and a row of LEDs, and you flip that thing open and inside are the radio gear, control panels, and other displays for the power system, and on and on.”

The idea now, Roberts told his audience, is “to be in communication all of the time.” He said he will be able to type while he’s riding and send and receive messages then, too.

His typing “keyboard” will be a set of four buttons on each of the two handlebars (on his recumbent bicycle, the handlebars are below seat level). Using a coding scheme he devised that is based on letter frequencies, Roberts will transmit his words to one computer that will translate them into “something a second processor can understand”; both processors in turn will control an LCD on the bike’s front panel, so there’s a screen editor online as well.

Yet a third computer will control a packet data communications link, allowing Roberts while travelling to compose and transmit a message to a satellite, and send it wherever in the world he wants. A message coming back the other way will cause a prompt to appear on one of the LCDs — “You have mail waiting.”

E.T. might not be able to phone home on this baby, but the sight of it would make him drool.

Between the time Roberts geared up for his first excursion and began planning for this one, technology has taken some giant steps. He is waiting for it to take some more before he—speaking as someone who writes for phosphor as well as print—endorses online publishing wholeheartedly.

He explained to the NOM audience: “I had a lot of second thoughts about publishing electronically when I first started. There’s something nice about the permanence and feel of print… I think the thing that’s going to make it more palatable is media like CD-ROM and things like that where you can actually deliver a product… It’s the tangibility of it that makes the difference… What will make me really happy with it is when the portable computer gets to the point where it is easy to read and pleasant, and you can download or buy a little chip or disc that has some sort of permanence, and you can sit and read on a comfortable screen.”

And although Roberts extols the virtues of his online “neighborhood” (“The network became my enclave of stability, so signing on was really sort of like going home… I got the feeling that I was just pedaling around my neighborhood, visiting people, and I started calling it dataspace.”), he acknowledges that going online is not a complete antidote for loneliness on the road.

For one thing, he announced he is taking a companion with him on this next sojourn. As he told his listeners, “At the moment, the bandwidth of information transfer through an electronic network is not quite the same as a face to face encounter. People try to make it so. The phenomenon of compu-sex, which has become much celebrated—that’s a sort of desperate attempt to make it solve all those types of loneliness. I think it became a balance… of thoughtful intellectual friendship online and more fleeting personal ones on the road.” And then many friendships that began online became personal as Roberts stopped in to pay a visit enroute.

For those who think that Roberts’ particular brand of mobile data—and personal—communications adds up to a money-saving lifestyle, the answer is no. Roberts acknowledged that his monthly expenses were the same—about $2,500 —whether he was on the road (he still maintained a base office with a secretary), or “chained to a desk.” But the congenial computerized cyclist left no doubt in his audience’s minds as to his preference.

“If you’re in the information business,” he says, “you can really ‘decouple,’ and that’s what I’ve been up to.” And that’s what he’ll be up to, when preparations are complete for his next high-tech trek.