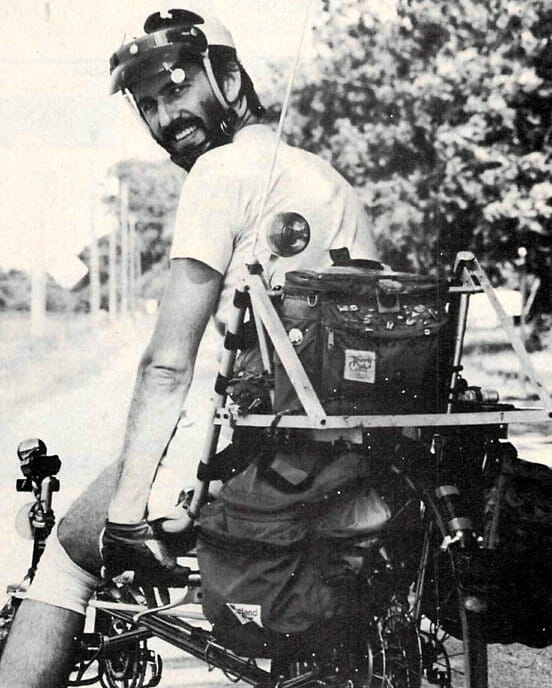 This article, written about 2 weeks before my initial departure from Columbus, takes a different tack than most… it’s a little skeptical, and questions the nuts-and-bolts of both systems and business model. I find that refreshing, as it introduces a few details that escape the rhapsodic journalistic approach that was more common.

At the time of the interview (mid-September, 1983), my bike was still being fabricated… hence this photo aboard Robby McCormick’s Avatar (serial #1), the bike that inspired the whole crazy adventure. The story of that encounter is in Chapter 1 of Computing Across America.

Anyone who’s bought a TRS-80 Model 100 will tell you that the portable lets you work without being chained to a desk, but one owner is taking Tandy’s “Micro Executive Work Station” idea far beyond an armchair or plane ride. Steve Roberts, a Columbus, OH, freelance writer, plans to conduct a year’s business with his Model 100, without stepping into his office once.

In fact, most of the time he’ll be lying down—on a custom-designed recumbent bicycle, festooned with generators and solar cells, which he’ll pedal 14,000 miles across America.

On the road, Roberts will record his various writing projects using a helmet-mounted microphone and a portable tape recorder. After setting up camp, he’ll transcribe his prose onto his 32K Model 100 and upload it via telephone to his main computer, a Micromax System 1000, in Columbus. Kacy Branstetter, Roberts’ manager and editor, will be standing by to receive copy, forward phone calls, and serve as what Roberts calls his “interface with the universe.”

Roberts’ .DO files, he says, will make a pit stop between bike and Branstetter: The trip’s primary sponsor, CompuServe Information Service, is supplying “essentially unlimited time and filespace” for uploading. CIS members are encouraged to chat with the rolling writer , and his saga will be available as a regularly updated data base: “I think you’ll be able to just type GO CAA and it’ll be there as a display file,” Roberts predicted.

His bicycle trip is a shot at both. Interviewed two weeks before his scheduled Sept. 28 departure, Roberts told 80 Micro he planned a 700-mile “shakedown cruise” around Indianapolis, IN, and Louisville, KY. Then, in early November, he’ll begin his journey with a turn south from Washington, DC, toward Florida to start a clockwise loop of the U.S.

“I’m anticipating [the trip’s taking] about a year. The idea, of course, is to take advantage of as much good weather as possible.”

As for physical preparation, “The obscene part of all this is that I’ve been riding around central Ohio, which is very flat and [where it’s] very easy to get cocky about your ability to go long distances. [But] unless there are physical problems I don’t see any trouble. I may bust a knee and jettison all this high-tech equipment.”

He’s already jettisoned an item that would have spared him frequent visits to phone booths. Technical problems and the unit’s weight aborted his plans to carry a second computer, a home-made CMOS CP/M system with 3½-inch microfloppies for mass storage; that leaves him the stock Model 100, no storage except RAM, and obligatory stops to upload every 15 pages or so.

“I’m hoping to get something that’ll be useful for [bulk storage] fairly soon,” Roberts admitted. “I’ve looked at wafertape drives, and I’m interested in what people are doing with 3½-inch floppies. If all else fails I have cassette, though I’m not crazy about it.

“If anyone comes up with more memory, I’m ready. I’ve talked a little to Holmes Engineering about the 256K bubble memory and it sounds like it’s not quite ready, but that would be a worthwhile purchase if it comes out sometime during the trip.”

Meanwhile, he estimates that his cycle, camping gear, and electronics equipment total about 110 pounds, some taken up by a high-tech way to save batteries: “A couple of solar panels that were donated by Solarex provide 15 volts in full sun,” he said, and another sponsor has contributed rechargeable Ni-Cad cells.

Besides relying on them, plus an ac line when available, Roberts has a generator similar to those that run bicycle headlights: “If I’ve got a good tailwind or I’m flying downhill, it’s a simple matter to pop [the generator] against the wheel and get power.”

There’s one item he doesn’t expect to use—a CB radio, carried in case of emergency. “I’ve stripped it down almost to just a PC board,” Roberts said. “It’s not even near me when I’m doing my regular writing, but if I’m crashed in a ditch somewhere I’d like to be able to call for help.”

While the trip will challenge not only Roberts’ stamina but the Model 100’s— “how well it will do in the sun and vibration and dirt and everything else”— Radio Shack is keeping its distance from the project. “They know about it but seem kind of unresponsive,” Roberts said when asked about any contact with Tandy. “I encountered such a huge, faceless organization when I [approached them] for a sponsorship that I went back to CompuServe.”

That may be because Radio Shack is unwilling to share other people’s publicity stunts. Roberts seems sincere and enthusiastic about the trip and eager to discuss it as an affirmation of new technologies’ ability to liberate desk-bound workers, but the enterprise is not exactly free of Madison Avenue-style merchandising.

In addition to his CompuServe updates, there’s the matter of what Roberts will write during his year on the road. Besides freelance magazine articles and material for corporate clients, he plans two books. One will be either a “boring but easy to write” text about on-line communications and engineering, or a computer science text which Roberts calls “potentially a huge money-maker but a lot of work.”

Roberts’ second and more important effort will be a book tentatively titled Computing Across America: A Bicycle Odyssey, for which his agent is currently negotiating with several publishers.

Suspicion of Roberts’ making the trip in order to write about it, rather than making it and then writing about it, lessens the credibility of his words to Today’s Gerber: “The whole trip offers an opportunity to test the viability of the information society. I want to see if I can maintain a heavily interactive, information-oriented professional practice involving a lot of clients [with] complete freedom from the confines of an office. I’ll exist in a totally asynchronous fashion.”

Also, Roberts’ point is to be free from desks and papers, yet he’ll be carrying generators and solar cells. Is that practical? “I think it is practical,” he told 80 Micro, “and I’ve been doing it on a very small scale recently as I’ve been practicing.

“I find I get a lot more done when I’m out on a beach or something with a Model 100. This morning, in fact, I wrote most of an article at a Wendy’s restaurant while having breakfast. When I’m out of the office, there are fewer distractions and I can get more done.”

This makes sense, but sounds more like most users’ appreciation of the 100 as a handy notepad than a defense of a full-time career with one. Also, of course, Roberts’ job fits his thesis better than most other professions would; the freelance writer is the most insecure financially, but the least place- and equipment-bound, worker there is.

Nevertheless, Roberts insists, his trip goes beyond both commercial aspects and his point about the open office. “If I wasn’t writing for a living and had lots of money I’d be doing it anyway,” he said. “The fact that I’m not independently wealthy forces me to work while I’m on the road, and [the 100’s] a convenient way to do that.

“I don’t think it is [a publicity stunt]. I’ve thought about it a lot and wondered if it was, and it doesn’t feel that way. It’s something I do privately as well as publicly.”

And, anyway, Roberts’ tour is an adventure. Computing Across America is unlikely to rival de Tocqueville’s Democracy in America or William Least Heat Moon’s Blue Highways, but Roberts’ combination of gee-whiz Woodstock spirit and “Real People” PR might produce a bestseller. How about Zen and the Art of Model 100 Maintenance!