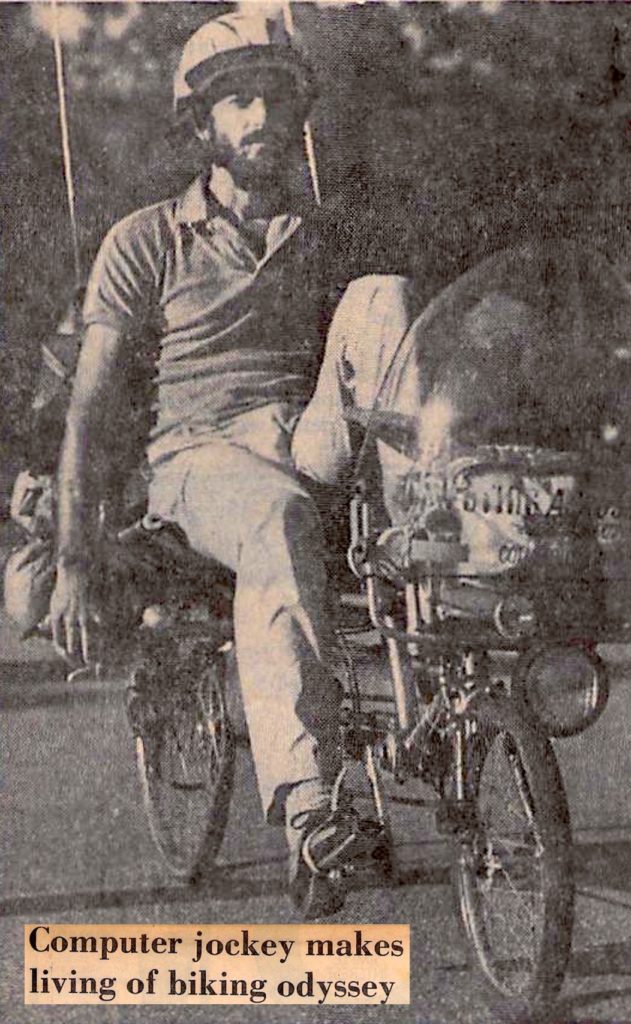 This article in the home-town paper, written while I was heading down the Georgia coast, was written at a time when most people didn’t have any idea about computer networking…

Steven K. Roberts has thrown off the shackles of an office job without losing a paycheck.

The Dublin resident is pedaling a 14,000-mile loop around America on a high-tech bicycle odyssey, earning money while having the freedom to travel to warmer climes.

ROBERTS, 31, a computer enthusiast, is writing one book about his travels and another about computers. He also composes a monthly column for CompuServe’s Today magazine on the portable computer he carries with him on his bicycle.

Roberts was interviewed by computer from the Columbus office of his manager, Kacy Cook. He responded from Brunswick, Ga., his stop for that night. The link was made through the national network of CompuServe, a Columbus company.

“The idea crystallized in the spring, when I decided not to spend another grey winter in Columbus,” he wrote in Georgia and the words appeared on the computer screen in Columbus.

A SELF-TAUGHT computer expert, Roberts wrote, he began the year-long expedition Oct. 28. [note: actually September 28, the start of the shakedown loop] His travels have taken him to Washington, D.C., and down the East Coast. He intends to circle Florida, head west, continue along the U.S.-Mexican border to Los Angeles and then turn up the West Coast to Vancouver, British Columbia.

By next summer, Roberts hopes to be on the eastern side of Canada, touring Nova Scotia. He will complete his expedition with an autumn in New England.

Lightweight radio receivers provide instant access to help in case of an emergency. But so far, Roberts wrote, he has met more friends than foes.

“Often I just show up in town, especially college towns, where all that is necessary to find a place to stay is pulling up in front of the dining hall at about 5 p.m.,” he typed.

“Eventually, a crowd gathers and the conversation sooner or later turns to places to stay.”

But just in case, he has a list of subscribers to CompuServe’s national network who have offered him shelter.

THE 135-POUND bike he uses was designed by Roberts and built by a Columbus company for $2,000. Solar panels produce electricity which is stored in a nickel-cadmium battery to provide energy for his computer, lights, and CB radio.

Roberts wrote that he has a tiny tape recorder and microphone in his helmet so he can dictate while he rides along for transcribing later.

He pedals about 50 to 60 miles per day, although he rode 95 miles one day last week, Roberts wrote. He has traveled a minimum of 2 mph in mountainous Pennsylvania and a maximum of 11 mph “on the other side of that hill.”

A FORMER computer consultant to some major corporations, Roberts philosophized electronically about his new life style.

“You can settle down with family and job, but you can’t really travel or wander,” he wrote, “or you can wander and stay unattached, but you never know what tomorrow will bring.

“The writing business is quite stable, assuring me a meal tomorrow. But I can go anywhere I like, whenever I like.”

Roberts, who has put his three-bedroom ranch house on the market, typed that he doesn’t know what his final destination will be “It’s a toss-up between the Northeast, the Southeast, the West, and some island somewhere,” he wrote.