This was fun… after my brief pedaling adventure with the third and final version of the bike, I supported myself and began funding the upcoming Microship project with a sort of non-stop media/speaking tour. I didn’t really live anywhere in 1992 after moving out of the Bikelab at Sun, but just wandered the US in the “Mothership,” a diesel pickup truck hauling the bike in a 20-foot mobile lab made out of a Wells-Cargo trailer… visiting companies, schmoozing, and scouting for lab space. As I recall, on this visit to the Seattle area I was eagerly exploring the University of Washington… encouraged by my faculty contacts but ultimately being defeated by academic space wars (which are universal). Anyway, dropping in on Microsoft was a hoot, and this is the in-house magazine article announcing the event.

What weighs 580 pounds, cost 1.2 million to build, sports high-tech wizardry from the labs of more than 150 companies, and rolls along at a piddling 1.2 miles per hour in the slowest of its 105 speeds? Would you believe a bike? Believe it or not, you can see this bike and its developer — computer consultant and “nomadness” expert Steve Roberts — from 2:30 to 4 pm next Wednesday, February 26, in the Building 15 Cascade Room.

This lean, mean, Grand Turing Machine is version 3.0 in Roberts’ continuing revolt against the tyranny of the desktop. Version 1.0 was released back in 1983, when Roberts became frustrated with his lifestyle as a deskbound computer jockey. “I had forgotten how to play,” he confesses in his Nomadness Phase III Prospectus. “The obvious solution was simply to equip a recumbent bicycle with ham radio and computer gear, establish a virtual home in the on-line networks, and travel full-time while writing and consulting for a living. Was such a mad idea really possible? Amazingly, it was.”

Roberts’ first bike, a custom recumbent called “Winnebiko,” carried him around America for 10,000 miles. He took along a Radio Shack Model 100 laptop — a novelty computer at the time — so he could write, develop software, and communicate over CompuServe with other people who also live in what he calls “Dataspace.” In 1986, he upgraded to Winnebiko II, which featured, among other improvements, a speech synthesizer, a packet data system for sending email via ham radio, and a 10-key handlebar keyboard he designed to let him type up to 100 words per minute while riding. [note: that’s effective speed with macro expansion; actual typing speed was about 35 WPM]

After three years and 6,000 miles on the road, supporting himself by biketop publishing and computer consulting, Roberts took a job at Sun Microsystems long enough to plan his move onto a third bike, the ultimate in pedaling luxury — BEHEMOTH (“Big Electronic Human-Energized Machine, Only Too Heavy”). A showpiece for future technology, it features some of the most advanced computer and electronic equipment in the world, with radical human interfaces, dynamic multiprocessor architectures, and experimental communications links that hint at what may lie ahead for society at large.

Roberts can write articles, design integrated circuits, debug software, and email friends who live almost anywhere while he’s pedaling BEHEMOTH across, say, Bainbridge Island (where he’ll ride in this year’s Chilly Hilly ride). Under the fiberglass fairing at BEHEMOTH’s front end is a Macintosh, which Roberts uses for everything from word processing to checking his electrical power supply. He can flip the Mac screen out of the way to reveal a 640×480 LCD driven by a Sun SPARCstation (Look, Ma — I’m riding a UNIXcycle!) attached to a 424 MB hard disk and a CD-ROM drive that gives him access to high-powered CAD software. Behind the seat is a DOS-based PC with a 20 MB hard disk containing a database that provides access to 5,000 contacts around the world. The PC feeds data to a tiny screen mounted in front of his eye. He plans to configure this to display a map with an arrow showing his current location, derived from a downlink from a GPS navigation satellite — accurate to within 50 feet worldwide.

The bike carries smaller CPUs of various kinds that maintain systems such as his refrigerator, power-generating brake system, and water-cooled helmet. BEHEMOTH also boasts voice-synthesis and voice-recognition software so Roberts can listen to incoming email messages or literally tell the bike what to do to lighten his load. Did I mention the ham radio, cellular phone, modem, and fax? Roberts can use any of them while pedaling. I’m not making this up. 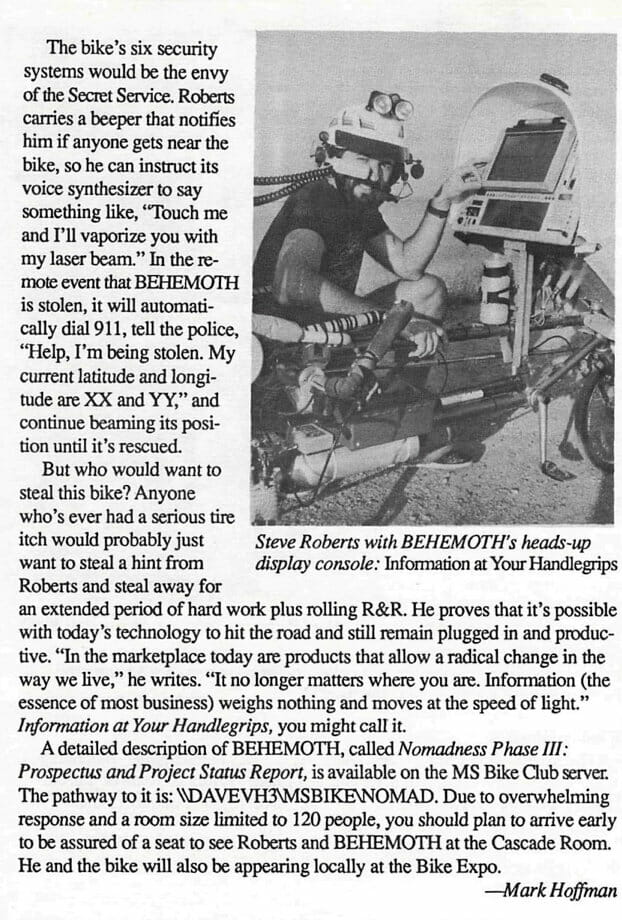 The bike’s six security systems would be the envy of the Secret Service. Roberts carries a beeper that notifies him if anyone gets near the bike, so he can instruct its voice synthesizer to say something like, “Touch me and I’ll vaporize you with my laser beam.” In the remote event that BEHEMOTH is stolen, it will automatically dial 911, tell the police, “Help, I’m being stolen. My current latitude and longitude are XX and YY,” and continue beaming its position until it’s rescued.

But who would want to steal this bike? Anyone who’s ever had a serious tire itch would probably just want to steal a hint from Roberts and steal away for an extended period of hard work plus rolling R&R. He proves that it’s possible with today’s technology to hit the road and still remain plugged in and productive. “In the marketplace today are products that allow a radical change in the way we live,” he writes. “It no longer matters where you are. Information (the essence of most business) weighs nothing and moves at the speed of light.” Information at Your Handlegrips, you might call it.

A detailed description of BEHEMOTH, called Nomadness Phase III: Prospectus and Project Status Report, is available on the MS Bike Club server. The pathway to it is: \DAVEVH3\MSBIKE\NOMAD. Due to overwhelming response and a room size limited to 120 people, you should plan to arrive early to be assured of a seat to see Roberts and BEHEMOTH at the Cascade Room. He and the bike will also be appearing locally at the Bike Expo.