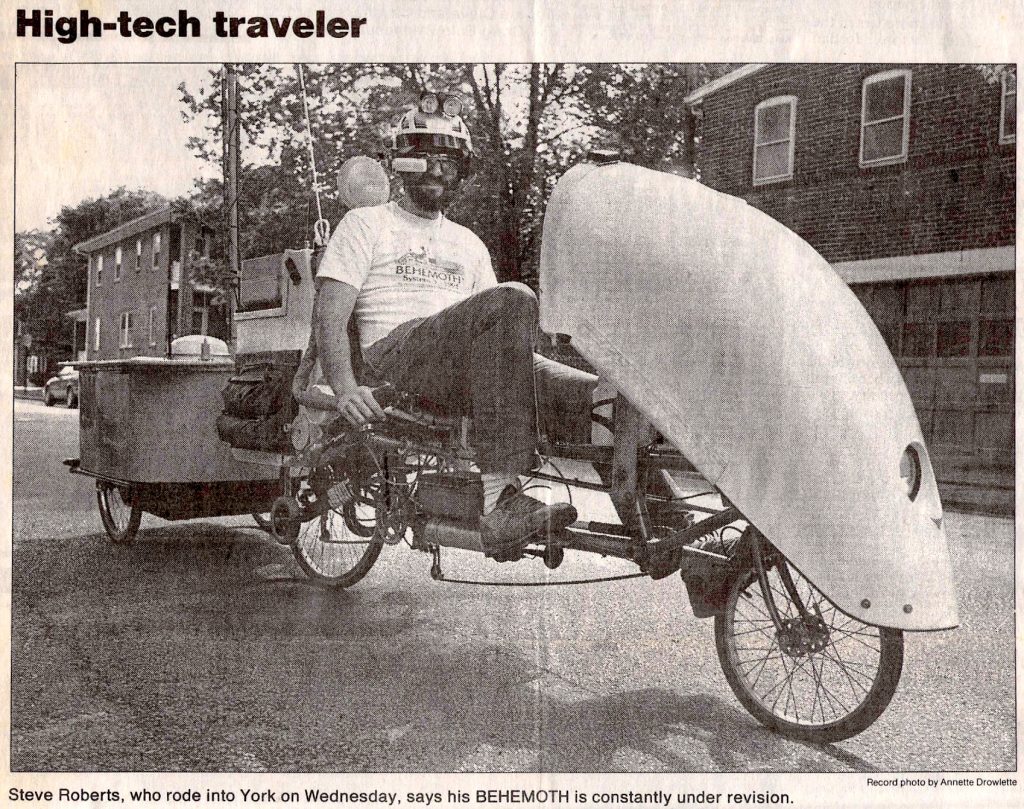 Steve Roberts didn’t care for classroom studies while growing up in Louisville, Ky.

But he loved science fair projects — like the acoustic model of the vocal tract he created.

Today, the 39-year-old still hasn’t lost his love for gizmos.

In fact, his entire life has become somewhat of a science fair project.

He tours the country on a 580-pound reclining bicycle, complete with solar-powered computers, cellular phones, a ham radio tower and a tiny satellite dish.

He has no home outside the contraption he calls BEHEMOTH — for Big Electronic Human-energized Machine . . . Only Too Heavy — and finds shelter across country with the thousands of friends and associates logged in his on-board computer system.

One of those is Patti Stirk, of Soft Systems Engineering in York, who read about Roberts and his homemade bike in a magazine and became of his many correspondents.

There, a table with soda and doughnuts greeted the nomadic nerd. So did a gaggle of computerheads, who crowded around BEHEMOTH, gawking at the array of circuitry beneath the hood and marveling at Roberts’ technical explanations.

“What’s this?,” said an onlooker, pointing to the ham radio antenna.

“That’s a BYP — big yellow pole,” said Roberts, to the amusement of everyone.

BEHEMOTH is mounted on a customized bicycle frame that allows Roberts to pedal in a reclining position low to the ground.

The front wheel is covered by a rounded hood, which is fastened to the frame by Velcro.

From a dashboard-mounted terminal, Roberts can type messages and retrieve electronic mail using buttons on the handlebars.

Messages are sent with modems or via satellite using a dish attached to a small trailer covered with solar panels.

Security alarms will report the bike’s theft to police, giving them the bike’s exact latitude and longitude. An alarm can also jolt a thief with a 60,000-volt charge to the seat.

“We’re all literally drooling over the technology,” Stirk said.

Roberts embarked on his odyssey nine years ago, pedaling away from his suburban home in Columbus, Ohio, with dirty dishes still in the sink, he said.

A free-lance writer and consultant, Roberts gave up stability to pursue his passion for adventure, computers, romance, publishing and the open road.

He’s crossed the country once and made several other trips up and down each coast, averaging about nine miles per hour over 17,000 miles. His longest one-day journey was 136.4 miles, he said, on a downhill grade in Colorado from Aspen to Grand Junction.

His adventures are chronicled in a book called Computing Across America and in his quarterly Journal of High-Tech Nomadness.

More than just an oddity, Roberts is making a living at what he’s doing, selling his publications – even T-shirts.

He has been featured in the Wall Street Journal, People magazine, and has been interviewed by Phil Donahue and National Public Radio. He has also addressed the National Science Foundation in Washington and has a date with Xerox Corp. executives in Rochester, NY. next week.

“I think it’s excellent,” John Kelly, with InSoft Inc. near Harrisburg, said about BEHEMOTH. “It’s helping push the boundaries of how computers are used.”