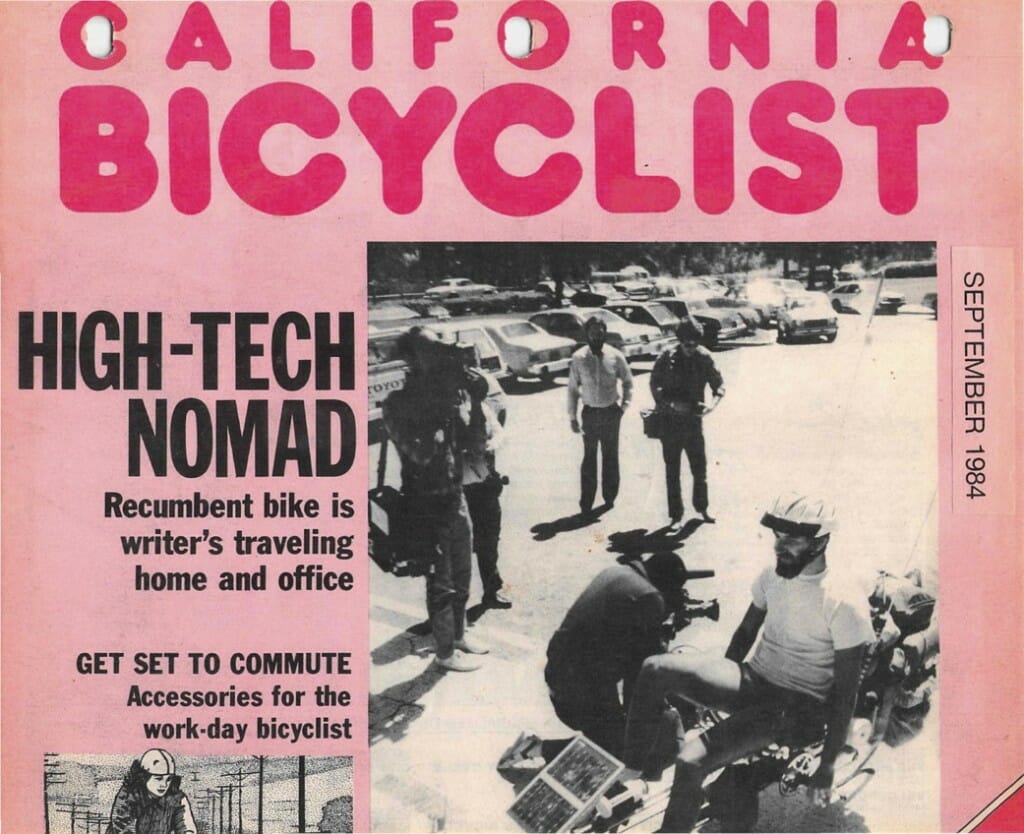 This came out while I was still in Colorado, pressing my luck with the looming onset of winter (the aspens were turning while I was relaxing in Telluride, and I got snowed-in for a few days). California seemed impossibly far away, but this article gave me a sense of welcome as invitations started trickling in via email.

What is eight feet long, looks like a camel from behind, carries a 165-pound load (plus human being), and serves as transportation, home and office for that human being?

Steve Roberts refers to it as his “Winnebiko.” a custom recumbent designed to take him on a two-year “high tech odyssey” of the United States.

Until last year, Roberts based his freelance writing career in Columbus. Ohio. “I was your average casual cyclist.” he recalled. “Then I decided I was never going to spend another winter in Columbus.”

This was no mere daydream for Roberts. He drew up a design for a recumbent he felt could carry him and his entire business on a cross-country trip. When he took the design to Jack Trumbull of Franklin Frames in Columbus. Jack allowed as how it could be done, with a change here and there.

The result is a “high-tech extravaganza” that combines the latest in human-powered vehicles, portable computers, and solar power. To Roberts, it’s simply “my home.”

The bike was built to handle the burden of Roberts himself, plus a portable computer, assorted electronic gear, camping equipment, and personal effects with minimum effort. This means an 18-speed drive train that looks like it belongs on a tandem, a 21-inch bottom gear, underseat steering, and an undished rear wheel equipped with drum brake.

The electronics component of Roberts’ set-up starts with solar photovoltaic panels mounted up front behind the Zzipper fairing. These cells generate about 5 watts of power in full sun and charge a 12-volt. 4-amp-hour nickel-cadmium battery pack that, according to Roberts, “powers everything else.” What does he do on cloudy days? He can recharge the pack simply by plugging it into any wall socket.

Specifically, the batteries power the sealed beam halogen headlight, a xenon strobe mounted with the CB antenna on the flagpole, a vibration-sensitive alarm system with electronic beeper, and a stereo cassette deck and tape recorder, complete with remote microphone. “I can throw the switch and record conversations on the road.” said Roberts. Then there’s the Cat Eye Solar cyclometer, the yacht horn (“I had an air horn, but this works better.”), the fluorescent lights for the tent, and the Hewlett-Packard HP-110 personal computer.

Yes, the computer uses the most power, but Roberts treats it as one of his barest essentials. He started out with a Radio Shack TRS-100, but recently switched to the HP 110. It serves as his communications link, data base/library, social life and word processor. “I had to get rid of some books and my flute to help make up for the extra weight,” he explained. “I really miss the flute.”

Once he’d made the decision to pull up stakes and take them with him, Roberts put in six months preparing for the trip. He sold his house in Columbus, rented an office, and hired an assistant named Kacy, with whom he splits his income on a percentage basis. She works in the office in Columbus, and Roberts communicates with her via electronic mail and/or modem daily. He also lined up a series of writing assignments with publications like USA Today and Popular Computing, as well as a contract with Simon & Schuster to write Computing Across America: A High-Tech Bicycle Odyssey, to be published in 1985.

Finally, last September, he was ready for his “shakedown cruise,” a 760-mile loop from Columbus to Indianapolis and back home via Louisville. The only casualty was the kickstand, which broke three times. He finally got rid of it. Roberts found that his lack of intensive training was little problem. “I got in shape on the road,” he recalled.

Then it was on through southwestern Pennsylvania to Maryland and onward along the Chesapeake & Ohio Canal to Richmond. Further south, he stopped at Kitty Hawk, then went on down through Georgia to Florida for an extended stay at Key West after logging over 3.000 miles.

Back on the road again, Roberts stashed the bike in the forward locker of a 36-foot yacht named Awesome! and sailed to Clearwater, in the Tampa/St. Petersburg area. Pedaling once more, he headed for the Gulf Coast via Tallahassee, and on into Texas for a one-month layover in Austin. In July, he rode on to Abilene, then Santa Fe, for a total of 6,430 miles.

When interviewed in August, Roberts was trying to decide whether to go “meandering through the mountains, to the Four Corners area,” or push directly for the West Coast. He estimated he’d be in the San Francisco Bay Area some time in October.

Roberts has found life to be anything but lonely on the road. “Every day is a complete cultural readjustment,” he said. “The areas and people I was most afraid of are turning but to offer the richest experiences.” He loves to tell the story of the Ohio farmer who, upon viewing the electronic gadgetry he had hooked up to a pay phone, asked, “Are you with NASA?”

What’s more, he’s discovered a “full-time social life” on the CompuServe network. “I’ve had about 1,000 invitations to stay with people, and my electronic mailbox is rarely empty.”

“Wordy!” they address his handle, “Where U B? How’s the trip going?”

“I would never have dreamed of attempting this trip with a regular bike,” Roberts asserted. “There’s no pain, no saddle sores. I just sit back and crank it out. My recumbent is far superior to those silly, old-fashioned, uncomfortable machines. I haven’t had to walk a hill yet. Last week I climbed 8,500 feet.”

You may be lucky enough to meet Roberts and see his high-tech mobile home/office when he arrives in Northern California next month. He plans to spend at least four months here while he writes the book, and he’s looking for a congenial place to stay, preferably in Silicon Valley or Berkeley.