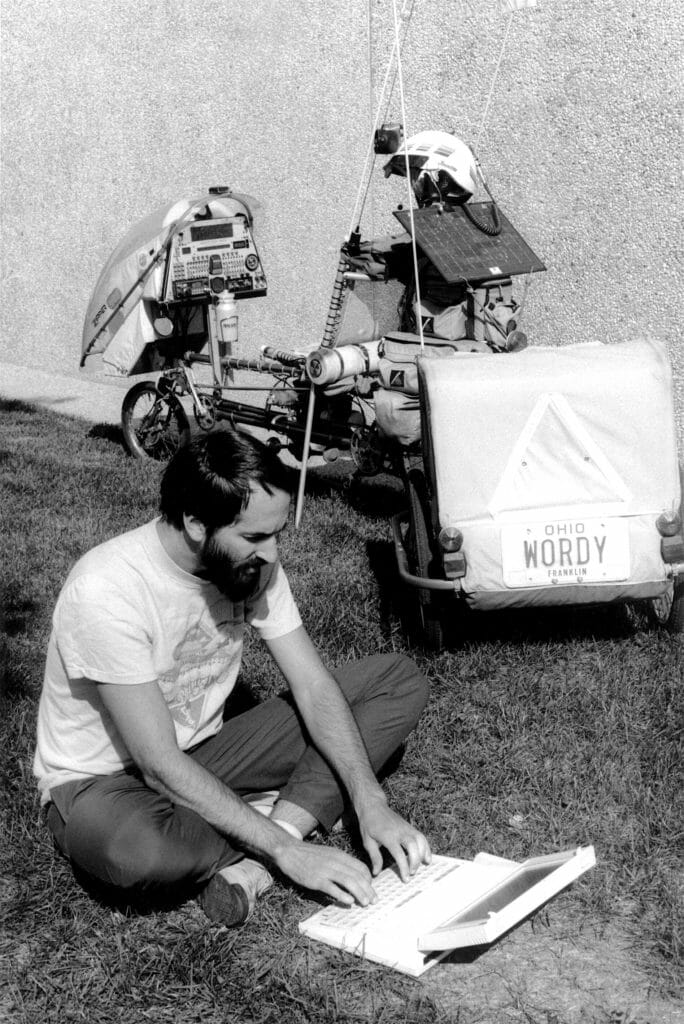 This article had an unexpected side effect – I got along so well with the author that he became my base-office manager. His extensive writings on the computer scene were always good, and having someone on staff who could “speak the language” was most helpful when dealing with publishers and sponsors. This is one of the best newspaper articles from the Winnebiko II epoch.

When Steven K. Roberts visited his parents in Jeffersontown in the fall of 1983, he arrived on a recumbent bicycle, an 8-foot maze of tubular steel festooned with gears, chains and wheels. The thing looked something like a wheelchair that had been caught in a trash compactor.

The house was empty and on the market The books, dishes, clothes and mountains of gadgets were all packed away in storage or sold at yard sales. Roberts had trimmed his life down to a tidy 135 pounds that could be packed away on the bike.

Within a week, he said, the strange contraption would become his rolling home and office, and he would put his free-lance writing business literally on the road. But more than that, it was to be a traveling adventure, in the grand tradition of Jack Kerouac, Ken Kesey or Peter Fonda.

“My parents thought I was a little crazy,” said the Seneca High School graduate.

But there was a method to his madness. His hook was technology. With a laptop computer, a telephone modem and an account on the CompuServe network, Roberts figured he didn’t need a desk or an office to be productive or to support himself.

Despite Mom’s misgivings, that’s pretty much how it worked. For two years and 10,000 miles, Roberts wrote columns and feature stories for computer magazines while collecting tales for a book.

The book, Computing Across America, The Bicycle Odyssey of a High-Tech Nomad, appeared earlier this year, only a couple of years behind schedule.

Last week the author came back to Jeffersontown, but this time he arrived in something a bit more substantial: a converted school bus with room for two recumbents, Roberts’ rebuilt Winnebiko II and companion Maggie Victor.

“It’s sort of a mothership,” Roberts said of the bus.

The original Winnebiko was outfitted with a modest array of electronic gadgets. The lap-top computer — first a Radio Shack Model 100, later a diskless Hewlett-Packard Portable Plus — was packed away with the camping gear. Built into the bike was a yellow highway warning flasher, a CB radio, a yacht horn and a motion-sensitive security system linked to a pocket pager.

The whole collection was powered by a pair of solar panels mounted fore and aft.

The new version, however, is even more of a caricature of the information age. In the center of the bike’s customized dashboard is the display screen from the Model 100, now boosted up to a quarter-megabyte of RAMdisk storage plus ROM-based software, including a database manager and an online dictionary.

To make riding time more productive, Roberts built an eight-button keyboard into the bike’s handlebars. A sequence of buttons entered on the handlebars becomes characters on the screen.

“It’s kind of like playing the flute,” said Roberts. At a full run, he said, he can type about 30 words a minute.

The Model 100 and the Hewlett-Packard both plug into a bike-based network. So does the security system, which now features a speech synthesizer. The system will crack wise with an approaching pretty girl or issue a warning to curious kids: “You are being monitored by the starship. Do not touch or you will be vaporized by a laser beam.”

Other additions include two ham radio rigs. Built into the console is a Yaesu 2-meter radio used mostly for local conversation, most often through a matching unit built into Victor’s bike. A 10-meter portable unit is more suited to long distance communication.

The Yaesu can be connected to the Model 100 to transmit data over packet radio channels. Roberts said he often will activate a packet bulletin board system on the bike computer when he arrives in a new town. The system sends out short bursts of information and invites other packet radio users to log on.

“I leave it on while I’m in a restaurant, and when I come out there are four or five messages on the BBS from local hams,” he said.

About 60 companies have contributed items to Roberts’ bike, and more are to come. The bike, he said, “has become a rolling test bed for new products.”

Later this year he plans to add a customized Macintosh computer and a compact-disc drive. The Mac will give him access to a set of U.S. road maps stored on CDs.

Roberts said he’s also looking for a music synthesizer that could accept input from his handlebar keyboard. That way, he could play and learn music while he’s rolling down the road.

For the next few months, however, Roberts is likely to spend more time on the bus than on the bike. He’s booked to appear at the national Hamfest in Dayton, Ohio, the spring COMDEX computer show in Atlanta, and the American Library Association convention in New Orleans.

He writes a monthly column for 73 Amateur Radio magazine and posts reports of his adventures on the GEnie computer network. There’s also talk of a movie based on the book and a ride through Europe.

But he said the open road — “the Other Woman” — is never far from his thoughts.

“You get addicted to the energy of beginnings,” Roberts said. “It can be very heady stuff.”