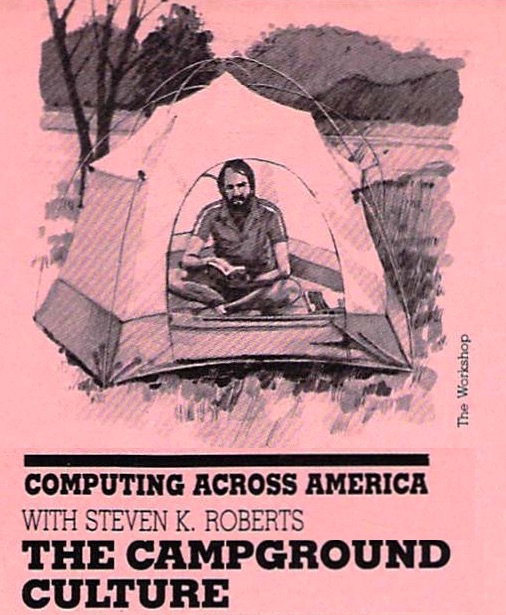 NOTE: A more detailed version of this is Chapter 24 of Computing Across America.

I awoke in my tent, confused about the insistent sound that pierced the night and shattered my dreams. I was still groping for the telephone with a sleepy right hand when my brain suddenly snapped into full awareness. The beeper!

The possibilities raced through my head as I flew out of the sleeping bag and grabbed, in the same motion, both the flashlight and the can of mace. The bike’s security system had been triggered, sending a tone-encoded signal over a 12-square-mile area. Was it a marauding raccoon, perhaps, like the one that stole my bacon the night before? Or worse, was it the same one — so emboldened by his easy pickings that he was back for a recumbent bicycle? Or… dare I think it, could it be a two-legged thief?

With a flurry of zippers reminiscent of a troop of boy scouts on bivouac, I emerged wild-eyed from the tent. I stood there in the dark at Florida’s Anastasia State Park, holding my flashlight and feeling a bit silly as I saw that the culprit was just the wind, whipping at the bike and causing enough vibration to trigger the alarm. Then the rain came…

Powerful, driving, flooding rain. I dove back inside, remembered the camera, and tumbled back out again. That safe, I zipped up, then thought of the toilet paper and wrote it off just as quickly. The bike, well, it had been wet before.

I dried off, lit the candle and sat in the tent thinking intently. I patted the floor affectionately. “What a sense of well-being . . . what a sense of warmth and security amidst the raging elements, here in this cozy — HEY! What’s all this then? The tent floor feels like an under-filled waterbed!” I unzipped again and flashed the Tekna-lite about, noting that my campsite had, in only a few minutes, become a small pond. As if to taunt me, a small frog crouched beside one of my forgotten sandals, his Kermit nose and bulging eyes barely break ing the rain-pocked surface. Hmmm. The first true test of the Domicile.

I awoke the next morning, reasonably dry, in sparkling sunlight. Next door, in site 17, two stranded young women from the University of North Carolina were renewing their quest for a lost diamond earring in the fallen leaves. (This just wasn’t their vacation: their car had died in the middle of the night at Coosawhatchie, S.C.) Meanwhile, in site 15, a chemist and a midwife from Michigan were conjuring breakfast for their passel of intelligent kids. All waved a cheery good morning, as I poured the rain out of my cookware and started coffee.

Ah, campgrounds. Congenial places, they are, where you can enjoy the illusion of wilderness without straying too far from phones, AC power and real plumbing. That’s part of the appeal — pitching a tent in the great outdoors without having to clear away thorns and poison ivy from a rocky hillside (ah yes, that first night in Thackery, Ohio…). But there’s also the strange community of the camping culture, adding another level of appreciation — or sometimes, exasperation.

I’ve spoken before in these pages of communities of travelers — in March, I rhapsodized about hostels; in April, guest houses. But campgrounds are something else.

Take the hard-core Winnebago set, for example. I once poked fun at those lumbering behemoths: larger than many apartments, they come equipped with full baths, microwaves, barbecue grills and strings of Japanese lanterns. I still poke fun at them, actually, but I do so rather charitably, for motorhomes are fun. Some people carry the “portable suburbia” concept a bit too far, however, and begin by unloading a power mower and cutting the grass before setting out the orange lawn furniture and firing up the TV dinners.

Of course, this is just one end of a complex spectrum. Right next door to a land yacht, you might find a loud beery group on spring break, making a daily commute to the beach and hoping to get lucky. Or three leather-clad bikers in Florida for the Daytona races. Or perhaps the trio of Michigan women, pushing back the night with brilliant lights — one even sleeping in the car instead of the tent, hoping to keep the beasties at a safe distance. Or you might find me, typing away amid a high-tech extravaganza of interconnected modules, while a decidedly extraterrestrial-looking dome tent dries in the sun. Or that blushing couple retiring early to their tent to take advantage of its imagined privacy.

There is something of a melting-pot effect in these places. The encounters can be interesting.

One spry 78-year-old white-shoed gentleman strolled endlessly about Anastasia, leaving his daughter reading by the camper. “I shook hands with Buffalo Bill,” he said proudly. “I was 3 years old at the time…”

A bit later, one of the bikers wandered over at the implied invitation of my friendly wave. He was a lanky tractor mechanic from Kentucky and spoke with the slow, lazy drawl indigenous to the region. I explained the bicycle while he said little, but some of his questions seemed surprisingly keen. At last he commented, almost offhandedly, “Ah rode a Schwinn from ‘Frisco to Lexington back in 73.” (Schwinn had two syllables.) He has since put about 150,000 miles on his Suzuki, so he understood the lure of the road far better than most people I meet.

But then, this is a campground, and by definition, the people who stay here must have at least some concept of mobility. It’s another one of those subcultures that remains the same, while the participants and the colors of the license plates continually change.

For a nomad (at least until the tires start to itch again), it’s a fitting home. Despite the squirrels that rip disrespectfully through my packs for a bite of GORP, despite the occasional group of campers who see the silence of the night as something to be overrun, and yes, despite even the behemoths that glow through the trees with the flickering blue light of their television sets, a campground is tolerable. Sometimes even delightful.

Anastasia is such a place.