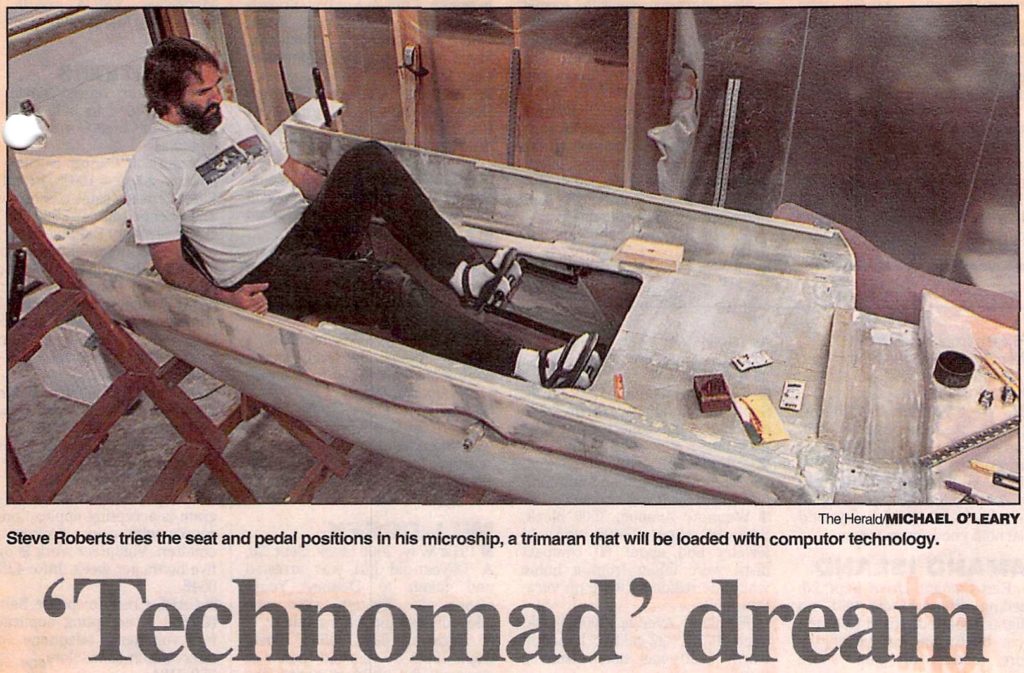 This article was written a few months after the move from the Silicon Valley lab sponsored by Apple. In March of 1998 Lisa and I had landed in the house on Camano Island, and immediately put up a 3,000 square-foot pole building in the 6-acre forest (with a contractor erecting the physical structure). It was an intense time… creating workspaces for the Microships, unpacking lab equipment, and setting up shop. By September we were turning our attention back to the boat, with fiberglass fabrication and electronic projects in full swing.

CAMANO ISLAND — If you asked Steve Roberts, “What’s your net worth? he’d smile enigmatically and talk about his Internet connections.

“It’s worth everything to me. Isn’t that the number one item on Maslow’s hierarchy of needs?” said Roberts, who added a house and shop to his assets when he recently moved to Camano Island.

Roberts is a “technomad.” His hi-tech bicycles and boats take him over land and sea, yet he can always check his e-mail.

Roberts posts his adventures and inventions on his Web site and has attracted a large following. Over the Net, he finds camaraderie among engineers, technicians and machinists who offer solutions to technical challenges. Some engineers have even come to his lab to help him with his inventions.

And Roberts can verify that the Net also holds romance.

Photographer Elizabeth Blinov in London, England, found Roberts in California’s Silicon Valley, in March 1997, through his Web site. She was working on a video on modern-day nomads.

After 1.2 megabytes of e-mail, longer than the average novel, they met and she moved to California. When the lease ended on his workspace, they moved to Camano Island. They were married in March of this year and Elizabeth Blinov became Lisa Roberts.

The couple built a 3,000-square-foot pole building near their Camano Island home on six forested acres where they are now finishing their first microship, a 19-foot micro trimaran. It’s the first of two. The Robertses plan to travel waterways together, each in a trimaran, wired with video cameras, computers and other gadgets.

Steve Roberts’ fascination with being computerized started in 1983. With a laptop, he could go anywhere and still be connected.

“Back then it was a radical idea. It’s not radical now,” he said.

He built a recumbent bicycle and took off across the country as a freelance writer, connected by laptop to a base office and publishers. In those pre-Internet times, he’d hook up to a pay phone, send stories and get e-mail.

But he couldn’t write while riding. He had to stop and get the laptop out. So he revamped his bike.

Now it’s a 105-speed bicycle with a satellite dish for Internet connections, and he’s logged more than 17,000 miles around the country. The helmet has a monitor the size of a postage stamp that hangs in front of one eye and gives the illusion of a screen hanging in space. Ten keys, one for each finger and thumb, are set into handle grips. Key combinations cover the keyboard.

“It’s like playing a flute,” he said. The bike is called the BEHEMOTH, which is an acronym for Big, Electronic, Human-Energized Machine (Only Too Heavy). It’s going to an exhibit at the San Jose Technical Museum this fall.

The two microships the Robertses are currently building each have three modes of locomotion: sail, pedal and solar motor. The two boats will connect with each other and the world via wireless computer networking.

“By the time it’s done, it’ll be bristling with antennas, solar panels and video cameras,” he said.

“We’ll test the waters for further scientific interest,” she said.

They’re outfitting the boats to collect environmental data, such as acidity, dissolved oxygen, water temperature, fecal coloform and hydrocarbons. Data will be posted on the Web to spark further inquiry, she said.

The boat was developed through contacts and information sources that mostly came over the Internet. Sponsors were also found through the Net.

He used the Net to entice engineers to visit Camano Island, such as Tim Nolan who took time off from his job doing automatic theater lighting systems in Wisconsin to work on solar panels that run the propeller.

“I’ve been working 12 years and thinking about what I want to do next. I read his offer of a geek vacation.” Nolan leaned back in his chair and smiled. “Some people say this is working for your vacation, but it’s not. It’s fascinating to contribute to this. Engineers are engineers because they love to create things.”

All this started with a man on a bike with a laptop computer. “I never thought this would turn into a lifestyle. I thought I was just going for a bike ride,” Steve Roberts said.

The Robertses plan to take a 12,000 mile trip using rivers and lakes to travel from Montana to the Gulf of Mexico. Then they’ll travel through the Florida Keys and up the East Coast, through the St. Lawrence Seaway and Erie Canal and three Great Lakes then work their way down the rivers over to Chicago, Illinois, St. Louis, Missouri, ending in Louisville, Ky.

Within a few months, we were quite settled in… see this story from November.