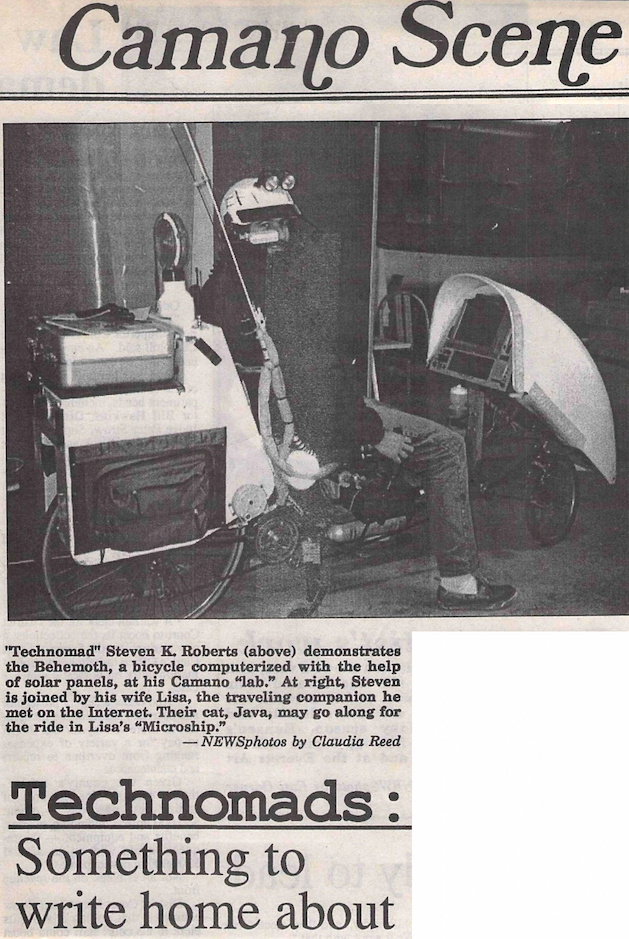 In early 1998, I bought a house with six wooded acres on Camano Island, Washington… ready to have my own workspace after many years moving in and out of borrowed labs (Apple, UCSD, Sun Microsystems, Borland International, friend’s houses…). Almost immediately, my partner and I began putting up a 3000 square foot pole building in the forest, and after a summer speaking tour resumed work on the Microships in earnest (see September article in the Herald).

This article did a good job of capturing the exuberance of the time. My old friend Bob Stuart moved in to work on the exotic fiberglass and fabrication projects, and we were intensely focused on getting the boatlets on the water…

When passion disappeared from the life of “technomad” Steven K. Roberts, he sold his house and hit the road — in a way that has attracted international attention.

“My passions were publishing, change, learning, technology, bicycling and travel,” Steven explains from his solar-powered Camano hide-a-way. “The obvious solution was to computerize a recumbent bicycle with solar panels and a way to connect with the Internet and travel full time while writing as a way to make a living.”

Obvious to a technomad, that is. The implications of the term are many. Is it “tech-nomad” or “techno-mad?” Only Steven can say. He coined the term and birthed the science of “technomadics.”

To understand all this, it’s necessary to take the phrase “travel while writing” literally.

Consider the bicycle. Even in its first version, the “Winnebiko” featured a computer screen where humbler bicycles have handle bars. Solar panels supplied the electricity. The “mouse” was wired into the bicycle helmet and operated by head motions. “Clicking involved pressing the handle bars near the seat.

In 1983, the “Winnebiko” became Steven’s only home. His address was anywhere in the southern United States, with a detour into Colorado, a place he had always wanted to visit

Occasionally, Steven stopped pedaling and writing and spent time visiting with the curious residents of Wherever, USA. Chances are he had already located a host family through the Internet. At someone’s home — or at a local phone booth – Steven hooked up his modem and wired back material that com-pleted the “make a living” part of the plan.

At first, the material was a continuation of the computer consulting work Steven had done back in Columbus, Ohio. That was before the folks in Wherever started spreading the news.

Speaking engagements, classes, a book on his adventure, a newsletter (The Nomadness Report), and a magazine replaced computer consulting.

Steven appeared on the Donahue Show, on the CBS Morning News and on television features in both Australia and Japan. No, he didn’t go there, the television crews came here. Steven confined himself to covering more than 17,000 miles within the continental United States.

The longer stops were at places where he could upgrade his “home.”

“The first 10,000 miles aboard the Winnebiko seem almost primitive, now,” Steven wrote in his magazine The Journal of High-Tech Nomadness.

That “primitive” bike had a five-watt solar panel and 18 speeds.

Next came Winnebiko II with 20 watts of solar panels, a two-meter ham radio, and 54 speeds. That version covered another 6,000 miles.

The “Behemoth” that now rests in Steven’s Camano “lab,” was ready to roll by the summer of 1991. The machine has 82 watts of solar panels covering the top of a cart attached to the back of the bike, 105 speeds, a satellite connection, a cooling system for the helmet and its overheated driver, a six-level security system and computer features that include CDROM, CD audio, satellite navigation, computer-generated maps, speech synthesis and recognition and a number of other state-of-the-art devices.

What could possibly come next?

In 1993, Steven parked his bicycle and began work on a “Microship.”

The hull is right over there in another part of the lab. Judging by the working drawings, it will resemble a canoe/kayak with wings. The wings will be topped with 480 watts of folding, foam-core photovoltaic panels. Incorporating all the best of the Behemoth, the Microship will also feature an ultrasonic wind sensor, an environmental data collection system, a full-range ham radio system, a video turret—and a sail. When the
wind isn’t right, the Microship, like the Behemoth before it, will operate from pedal power.

This time, Steven will have lots of help pursuing his passion. An alphabetical list of sponsors fills an entire page and includes such names as Sony, Motorola, Reebok, Sharp Electronics, Shiva Environmental Systems and the Scripps Institute of Oceanography.

Work on the Microship took place at the University of California at San Diego, where Steven received lab space in return for teaching classes in electrical engineering. It continued in a building contributed by Apple Computers in California’s “Silicon Valley.” Then it came to Camano.

He also prefers the human environment on Camano Island. The Silicon Valley, he says, has degenerated from an “intellectual playground” to a place where people are simply “busy.”

But working in a lab surrounded by five acres of tall trees hasn’t meant working in isolation. First Steven imported Bob Stuart, the “fiberglass guru” who is now seated in the lab in an orange jumpsuit. Then he instituted the “geeks vacation program,” in which other techno-mad individuals camp out at Steven’s house, volunteer their labor to help launch the Microship and receive a better education than many colleges can provide.

Few know — or care — that their teacher dropped out of college in 1969, before receiving a degree. The adopted son of a mechanical engineer, Steven learned all he had to know by studying the available literature and experimenting with the necessary equipment.

“Passion and curiosity are far better motivators than fear of tests,” he says.

In the mid-1970s, when computers were primarily the tools of industry, Steven built his own personal model. By 1982, he had written a graduate-level textbook on microprocessor design.

But there is far more to Steven’s work than technical excellence.

When Steven traced his biological parents, he discovered that he is descended from a long line of artists, writers, boat builders and adventurers.

“Engineering without art is just calculating,” Steven says. “And art without engineering is dreaming.”

In 1910, Steven’s grandfather built a boat and sailed down the Mississippi River into what was then wild country. He kept a journal.

This spring, when Steven launches his Microship, he’ll take his grandfather’s journal along, compare notes and incorporate the contrast into the book he plans to write. With the help of his computer, Steven will also record the details of the altered environment, providing the information to those who can best make use of it.

The union of art and technology brought Steven his traveling companion, a woman he met, naturally enough, on the Internet.

“The Internet,” Steven says, “is a virtual community of many millions of people. You don’t get distracted by physical components. You can fall in love with somebody’s brain.”

The brain he fell in love with belonged to a woman named Lisa, a photojournalist who had been covering art that incorporates innovative technology. Like Steven, Lisa is familiar with out-of-the-ordinary lifestyles. It probably helps that she is the daughter of a British diplomat and spent a portion of her youth in Malawi, the first country south of Zimbabwe in east Africa.

Equally in love, Lisa flew in from London to meet face to face. Lisa and Steven were married two years ago. This spring, two Microships will be launched into Puget Sound for trial runs. In 2000, the journey will expand, starting at the headwaters of the Missouri, moving across the plains to the Mississippi, up the Ohio River, south to the Gulf of Mexico, around the Florida Keys, up the Atlantic Coast and on . . .

After that, who knows. Having explored land and water, the air might be next.

“A dirigible,” says Lisa, pronouncing it as the French word it really is. “I’d go for that.”