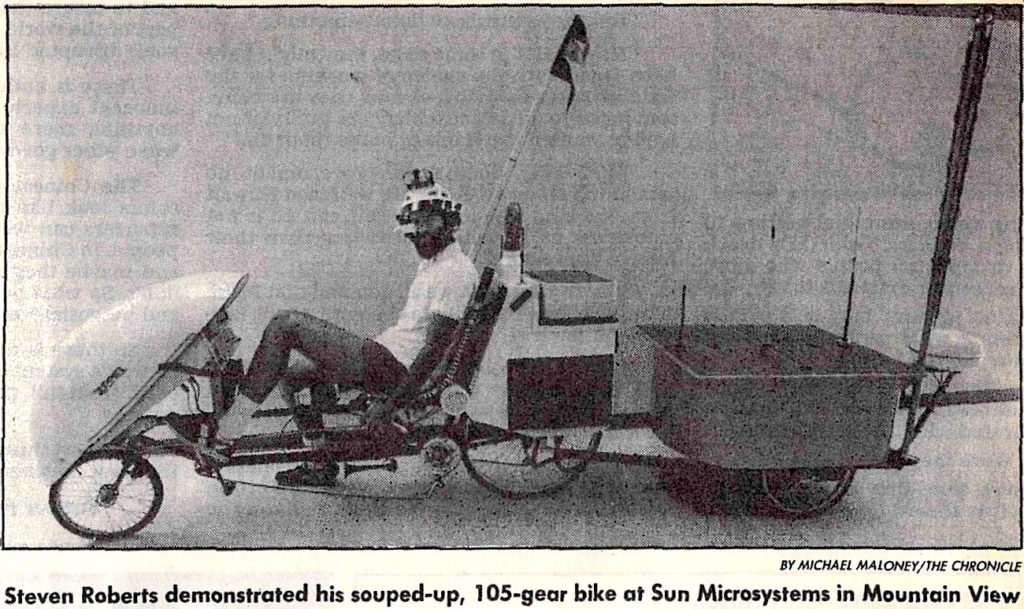 This piece appeared during the final push at the Bikelab in preparation for RAGBRAI, which in retrospect was kind of a crazy idea (testing 3.5 years of work on a hugely heavy machine in the company of 10,000 cyclists cranking out hundred-mile days… what could possibly go wrong?). But public deadlines are a good thing, as any company driven by trade shows knows, so this phase of frenetic activity would probably not have happened without that ticking clock.

It has cellular phone,
satellite navigation,
and word processor

When Steven Roberts pedals out of Mountain View next month, he will he the best-equipped cyclist in the world.

His 105-gear Behemoth bicycle, which he designed with the help of some of Silicon Valley’s brightest minds, includes a satellite navigation system, computers, a ham radio and an elaborate alarm system.

“It’s powered by the sun and propelled by human muscle,” said Roberts, 38. “The main thing is, it’s a way for me to make a living.”

Roberts was a desk-bound engineer and writer in suburban Columbus, Ohio, in 1983, when he decided to create a lifestyle built around his three passions: travel, technology and bicycling.

“It was obvious what I had to do,” he said. “I took my Radio Shack laptop and a bike and set out.”

Several bicycles later, after years of redesign work at Sun Microsystems in Mountain View, Roberts plans to leave the Bay Area on July 12 on the Behemoth, which stands for Big Electronic Human Energized Machine, Only Too Heavy. The bike weighs about 350 pounds.

The Behemoth has a cellular telephone hooked, like the ham radio, into the international computer networks. It is also hooked into the Navstar satellite system, which can pinpoint its location within 50 feet at any time, Roberts said.

The bike has about a half-dozen computers on board. A word processor is operated by a small keyboard built into the handlebars that allows Roberts to type while in motion. Commands to the other computers are activated by an ultrasonic beam built into his biking helmet.

There is also a complex security system to detect unusual motion, which Roberts can monitor via a two-way radio. If stolen, the bike automatically alerts police to its location.

It also incorporates a few luxuries, such as a refrigerator, a stereo system and a coolant that is pumped into Roberts’ helmet during uphill climbs. An accomplished flutist, Roberts has equipped his typewriter keyboard to double as a musical instrument.

Although more than 150 companies have donated equipment for the bike, Roberts’ main sponsor is Sun Microsystems, which has given him a work space, tools and assistance for two years, said Laura Tong, the company’s new development manager. Roberts is a consultant for the company.

The self-described “yuppie hobo” looks forward to biking in Iowa.