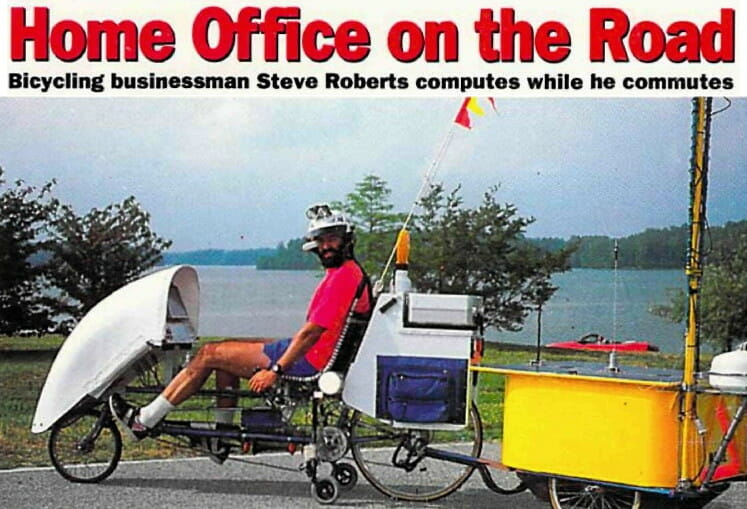 This was one of my favorite BEHEMOTH-era pieces, written by the insightful and prolific Daniel P. Dern . The photos were taken in North Carolina by Bob Ponzoni, and the magazine did a follow-up 6 years later. This was from the heyday of BEHEMOTH — not so much in bicycle-touring mode, but in its equally important role as an evocative symbol of what was to come in nomadic connectivity.

A Restless Computer Consultant
Takes His Business on the Road

So you can’t drink and drive. But nobody ever said anything about downloading and driving. For nine years, Steve Roberts has been doing everything from typing to telecommuting — on a bicycle. And unlike those who must tailor their home offices to the demands of their careers. Roberts has built a lucrative business around his eccentric vision of working from home. His idea: You can indulge your hobby — in his case, traveling by bicycle — and work at the same time. His career: writing and talking about it.

Roberts’s customized bicycle, Behemoth, embodies his vision of the future: “that people can indeed be free, follow their dreams, and break the chains that have always bound them to their desks.” Not that Roberts has left his desktop at home. The Roberts office rivals the most technologically advanced headquarters — minus a few details, like walls.

Packed to every spoke and sprocket, his 13-foot-long, 580-pound recumbent bicycle and trailer include a ham radio, a cellular phone and modem, a satellite dish, and a binary keyboard with eight keys — which allows Roberts to type 35 words per minute while riding, using a set of macros and abbreviations. “During the first trip,” he explains of his early traveling office, which lacked such modern accoutrements as a computer he could access while pedaling, “brilliant tales crystallized in my head and then evaporated, lost forever in the passing breezes.”

At first glance this pedal pusher might look like an ice-cream vendor from Star Wars. But Roberts is just your average technophile, who broke out of the limiting corporate environment of the computer world and struck out solo — bicycle pump in one hand, portable computer in the other.

In 1983 Steve Roberts was a disgruntled computer consultant and writer and a disgruntled resident of Columbus, Ohio. “I was doing what most struggling young freelancers do,” he recalls, “taking on a succession of projects, destroying passions by turning them into businesses, and trying to make enough money to stay afloat. I was chained to my desk, and deep in debt like everyone else. My reality had become one of performing decreasingly interesting tasks for the sole purpose of paying bills, supporting a lifestyle I didn’t like in a city I didn’t like.”

Far more inspired by his hobbies — writing, adventure, computer design, ham radio, and bicycling — Roberts opted for the “obvious” solution. He established a virtual home on the nascent on-line networks, supporting himself while writing and consulting for a living. He quickly envisioned a cross-country tour.

The “obvious” vehicle for such pursuits didn’t exist, so Roberts set about building it: a custom recumbent bicycle — a predecessor to Behemoth that he dubbed Winnebiko — equipped with camping and cooking gear, a Radio Shack Model 100 portable computer, an acoustic coupler modem, a CB radio, a security system, and a five-watt solar panel. After traveling 10.000 miles on Winnebiko, Roberts had had enough adventures to fill a book, which he called Computing Across America. He had also done enough research to start work on Winnebiko II, whose most significant improvement was a keyboard built into the handlebars.

With the help of bicycle designer Jack Trumbull of Columbus, Roberts designed Behemoth to withstand the particular strains of carrying four-tenths of a ton while regularly traversing steep countryside. (The name is an acronym for Big Electric Human Energized Machine, Only Too Heavy.) Unlike the standard touring bicycle. Behemoth has 105 speeds, six brakes, and three derailleurs. The bicycle travels at only 1.2 miles per hour in its lowest gear — a speed that makes balancing a little tricky. For especially low-speed conditions, the bicycle is equipped with pneumatically actuated landing gear.

Behemoth also carries a portable Macintosh for telecommunications, word processing, and biketop publishing — Roberts puts out The Journal of High Tech Nomadness, a newsletter for cyclophiles. He examines scrolling maps and other travel information on a DOS system with a helmet-resident monitor. And he makes frequent use of his MIDI sound system and his high-end Sparcstation with 424MB of storage and 12MB of RAM.

Among the bike’s other exotic features are an on-board compressor to recharge the air tank, which powers the horns as well as the landing gear: a parking brake in case the hydraulic brake fails; steering bars that extend from the seat to afford a more ergonomic typing position: a speech synthesizer that can be triggered by security sensors or remote radio command; and the helmet — a cross between a work of art and what might be called a virtual-unreality machine. “Atop my head.” Roberts says. “is a decidedly bizarre helmet with a |monitor] display, motion sensors for cursor control, lights, a fluid heat exchanger for body cooling, and an audio system.”

ALL THIS, AND A SOLAR SHOWER

Roberts can do practically everything on his bike — barring sleep and a few other natural functions. “Unfortunately,” Roberts concedes, “none of the gizmology protects me from rain, cold, darkness, dehydration, hunger, or loneliness.” To address such problems, Roberts has outfitted his bicycle with the makings of what he calls his “porta-condo.” “Credit-card camping,” as Roberts calls the motel option, is less practical when your partner is a 580-pound vehicle. So Behemoth carries a deluxe suite’s worth of camping gear — food; medical supplies; cooking equipment: foul-weather gear: a sub-zero-degree sleeping bag; an alarm-equipped tent large enough to house the bike, trailer, and rider: and. of course, a solar shower.

When Roberts’s schedule calls for him to move farther and faster than Behemoth can carry him, he pulls into the MotherShip, a 20-plus-foot Wells Cargo trailer and pickup combo with a lab and an office built in. The MotherShip is no replacement for Behemoth, though. Roberts thinks of it as a rolling layover: “It gets me to gigs and keeps my lab set up as I travel.”

More than 17,000 miles and two bicycles after beginning his odyssey, Roberts has transformed a fledgling career hacking for the computer press into his dream job: He spends 50 percent of his time giving lectures about his “lifestyle prototype.” His remaining hours are dedicated to publishing his newsletter and the companion quarterly journal, Nomadness, writing about his travels, and chasing the elusive horizon of technology.

Soon Roberts will be even better equipped for his high-tech treks: He plans to spend 1993 getting a fully amphibious version of Behemoth up and running, and in 1994, he’ll hit the road — er, water — again.