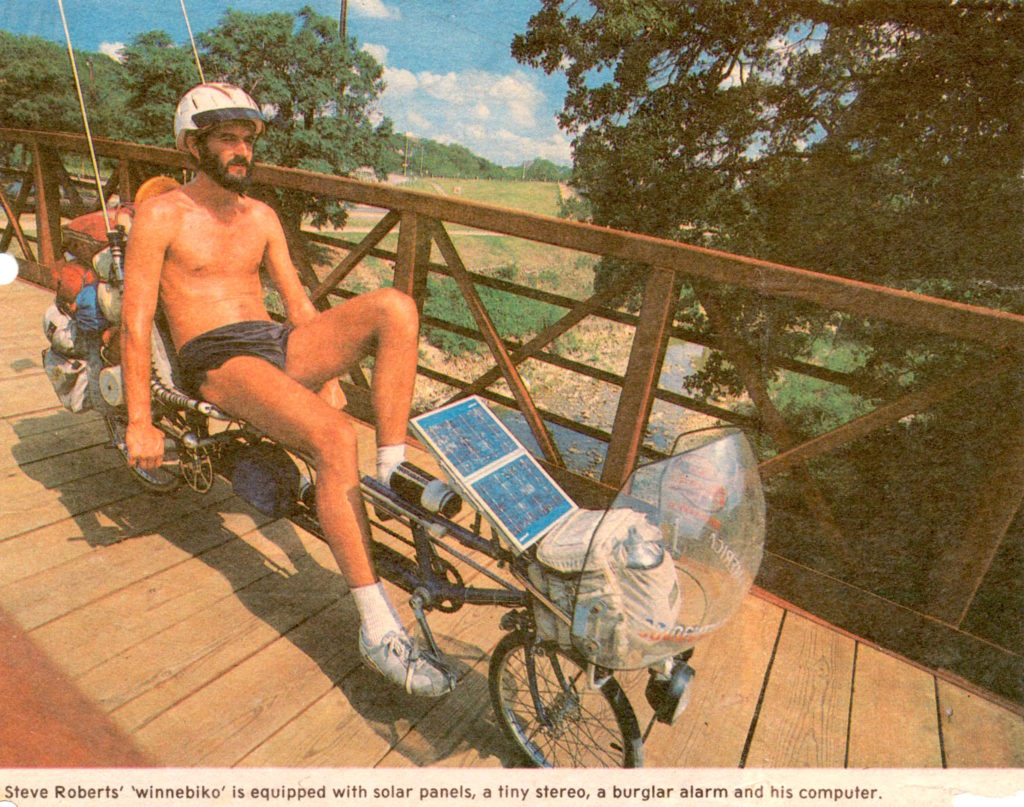 This article by John Schwartz in the Austin American-Statesman stands apart from the rest of the newspaper stories written during the first 10,000 miles… it reads as a feature piece, and was published about a month after I pedaled out of town into west Texas. Local media coverage usually had a sort of ephemeral “geeky guy on strange bike passes through town” flavor, but this takes a longer view that invites the reader to contemplate what lies ahead, given the new lifestyle enabled by portable computing and network technology… all without stepping outside the engaging human-interest flavor. I was not surprised to see John’s career soar, including many years as a feature writer at the New York Times, and he is the author of This is the Year I Put My Financial Life in Order, a “personal finance guide and memoir for people who hate even thinking about their finances.” (I am reading this in 2018 and wish it had existed when he and I met 34 years ago; it would have saved me lots of mistakes, and I recommend it!)

I spent about 3 weeks in Austin, fascinated by the co-op culture (leading to a rhapsodic chapter in Computing Across America). The city felt like an oasis, with a cosmopolitan culture, lively academia, lots of geeks, excellent music, and a superb network of bike paths… a contrast from most of Texas.

Steve Roberts is living out a traditional American fantasy: He is on the road, riding across America on his custom-designed “recumbent” bicycle.

The dream of taking off in search of the U.S.A. — whether down the Mississippi with Huck or across Route 66 with Moriarty — is venerable. But Roberts’ style is new: He is computing across America. Roberts, a self-proclaimed “high-tech nomad,” is paying his way by writing accounts of the trip on his portable computer.

The bicycle, or “Winnebiko,” as Roberts calls it, is a marvel of high-tech utility. He chose the lay-back, “recumbent” design (which many people first saw as Christopher Walken’s odd contraption in the film Brainstorm) because he says it is the most practical and comfortable bicycle for such a lengthy trip.

“Racing bikes,” he begins, and pauses, grasping for a term — “just aren’t user-friendly.” Roberts outfitted the machine with panniers to hold his clothes, maps and other gear. Solar panels on the front of the the bike give it an eerie, Star Wars look.

The panels provide power for the rest of his equipment, including lights, a horn, a CB radio, a tiny stereo, a burglar alarm that awakens his beeper if anyone touches the bike, and the portable computer. The bicycle and all that’s on it weigh in at 160 pounds.

The 31-year-old Roberts makes a good match for his vehicle. His 6-foot-4 lanky frame, tanned and hardened by the trek, seems to merge with the machine as he pedals along. Roberts, a native of Louisville, Ky., has worked as a free-lance writer and computer and engineering consultant since dropping out of engineering school during his first year of college. He writes about computers and artificial intelligence, and the meeting point of engineering and the arts.

“Art without engineering is just dreaming; engineering without art is just calculation,” he says. To Roberts, this trip is an example of how the two worlds can coincide.

Roberts started his odyssey eight months ago in Columbus, Ohio, where he had been working. He says he had wanted to do the bicycle tour for three years. With the introduction of the portable computer. Roberts realized that “you don’t have to be tied to a desk and an office anymore,” and could take the trip. Finally, he decided that it was time to go. “I swore I’d never spend another winter in Columbus, Ohio,” he recalls, smiling.

Roberts planned the trip and designed the bike for six months. He put his house on the market and held a garage sale to unload his possessions. He spent $2,500 on the bicycle itself, and another $3,500 on accoutrement. Then he climbed on and began pedaling. After an initial 762-mile circular jaunt (“my debugging trip”), Roberts was confident and ready for the long haul. Striking out across the Appalachians to North Carolina, Roberts worked his way south along the eastern coast of the United States until he reached the Florida Keys. “Key West was paradise,” he sighs.

Following the coast of the Gulf of Mexico, Roberts passed the 5,000 mile mark soon after entering Texas. He rolled into Austin with 5,305 miles on his digital-readout odometer. He has found the city much to his liking, thanks largely to the thriving communities of computer buffs and cyclists. “I never had any idea it was so cosmopolitan, so high-tech.”

While in Austin, Roberts has checked out the local electronic bulletin boards like Joe Ely’s “Campfire Nightmares” and “The Diner,” and says Austin’s systems have more “personality” than others he has tapped into across the country. And Roberts has nothing but praise for Austin’s extensive bicycle paths, which he considers the best he has seen.

Roberts planned to turn toward Northwest Canada, and then will work his way down the Pacific coast. He expects to be on the road for three years, but admits that he has no firm plans.

“I’m doing it for the day-to-day experience,” he says. He contrasts his meanderings with the determined, hard-driving “vacations” of some bicyclists who see little more than the highway dividing line for their entire trip. “I’m trying to make good time, but the emphasis is on the ‘good,’ ” he says.

The most innovative aspect of Roberts’ journey is his portable “office,” which allows him to continue his extensive free-lance work on the road. He is writing a series of columns for USA Today, and publishes stories about his trip in any magazine whose bailiwick he happens into. For computer buffs, there are articles in Byte, Popular Computing, Portable 100 and others. Cyclists can read his work in Bicycling. Writers’ Digest ran an article by Roberts on mobile freelancing. He has signed a contract with Simon and Schuster to write a book, tentatively titled Computing Across America. His work also appears on CompuServe, an information and communication service for computer users with telephone connections.

Roberts credits three things for the success of his portable office: his computer, CompuServe, and a secretary. The computer, a lightweight Model 100 from Radio Shack, is about the size of a notebook, and has a built-in word processor and a telephone connection, or modem that allows Roberts to send his competed stories electronically. He uses CompuServe as a “work space” between his secretary and himself, and for electronic mail. The secretary takes care of the business side of things back in Columbus.

Roberts has specially equipped the bicycle for writing on the road. A small switch on the handlebars turns on his tape recorder; a microphone is attached to the bike frame near his head. Sometimes Roberts dictates as he rides, but more often he snakes his hand down to flick the inconspicuous switch and catch a snatch of dialect for his columns.

The worst problem many long-distance travelers face is loneliness, but it has not been a problem for Roberts. The high-tech bicycle is a world-class conversation starter, and Roberts is able to pick up from there.

More important, Roberts takes his friends with him wherever he goes, thanks to his computer. By logging on to CompuServe and entering a service that is modeled after a CB radio channel, he and his buddies across the country can chat electronically long into the night. The friends keep track of his progress, and many offer him lodging along his way. (For Austin computer users who wish to contact him, his user ID on CompuServe is 70007,362 and his “handle” is “Wordy.”)

Roberts is not sure what he will do after completing this trip, preferring the impulsive route. He told his parents that he would be undertaking his journey only 10 days before leaving; he broke the news by sending them an article about it.

He remembers his mother asked, “What’s the matter, Steve — are you going to be a bum all your life?”

“Yeah, Mom,” he remembers answering, “I’m going to be a bum all my life. But what’s the matter with that? At least I’m happy.”

John Schwartz is a free-lance writer based in Austin.