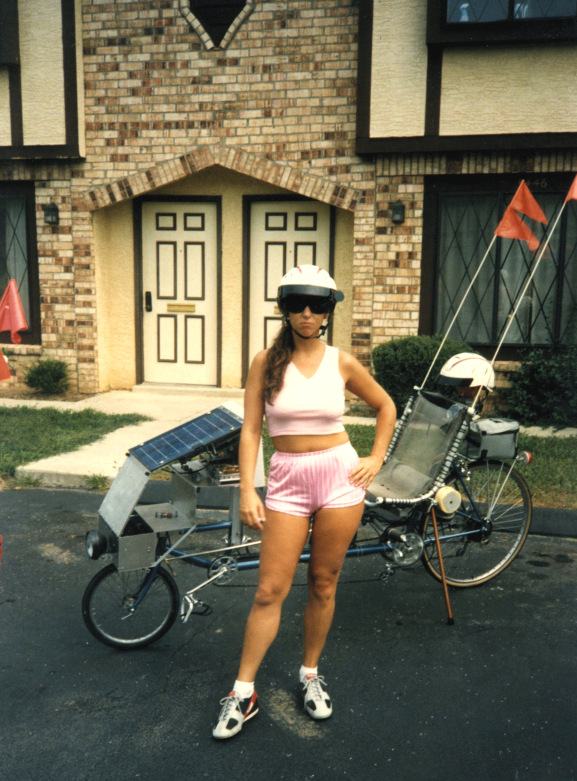 She calls it a success story. An opportunity to take life on firsthand. A chance to travel, meet people and write about her experiences.

For Maggie Victor, it fills that need for a ‘‘sense of adventure” and a need to be happy at what she’s doing.

On Saturday, the former Marionite will leave Columbus for an indefinite jaunt across America on a rather unusual-looking bicycle: a long complicated-looking thingamajig, also known as a recumbent bicycle.

Victor had never heard of such a vehicle until she met Steven Roberts. The
recumbent bicycle itself is nothing new. But Roberts had computerized his Winnebiko bicycle. So as he rode across the United States, he maintained his work as a full-time freelance writer. In addition, he provided marketing services and wrote his fourth book, which is now being published, Computing Across America: The Bicycle Odyssey of a High-Tech Nomad (Learned Information, Meford, N.J.)

Christened the Wondrous Winnebiko, Roberts’ vehicle has drawn the interest of hundreds of people across America, many of which correspond with him — you’ve got it — by computer. Also, it has led to appearances on CBS Morning News and PM Magazine. His articles have appeared in publications like USA Today and Popular Science.

Victor met Roberts when he was early in the preparation stages for his next trip across the country. It was during a jazz music performance in a Columbus bar, and Roberts stood out because, as usual, he was working on a computer. The couple started dating, when Roberts soon popped the question: ‘‘Did you ever think about riding a bike across country?”

At the time, Victor was an energy auditor for Marion-Crawford Community Action Commission. She lived in Marion and was active in Marion Community Theatre. Her job was to inspect homes for energy efficiency — a task she performed so well that she won state awards.

She ended up using this award money to purchase a recumbent bicycle. She
resigned from her job in May to begin preparation for the “Computing Across America” trip.

The duo will first venture by van to the 1986 Expo in Vancouver, British Columbia, where the Winnebiko II will be on display Aug. 24-31. Then, they will set off from Seattle, Wash, for at least a year’s worth of traveling and writing. Victor will share her experiences in a biweekly Sunday column appearing in The Marion Star.

This will be the second column she has submitted for the newspaper. the first being related to energy efficiency.

Her material will be transmitted to Roberts’ secretary in Columbus, who will then print it out and mail it to The Star.

The couple will camp and sometimes stay with people Roberts has “a hospitality database” which lists about 2,500 people who offer their homes as a resting place.

They will travel rain or shine (if the rain is not too cumbersome for the rain gear they have). And Victor hopes they don’t go where it’s too awfully cold.

Victor’s bicycle differs from Roberts in that it carries only a CB radio and a solar panel. The panel collects energy from the sun and stores that energy in batteries used to operate the radio and Roberts’ computers. If the sun disappears for a few days, wall outlets are used to recharge the batteries.

Roberts’ bicycle is equipped with five computers, two solar panels, a satellite communications gear, an aircraft-style control console and a 36-speed gearing system “to help move it all.”’ His bicycle weighs 225 pounds.

But beyond all the sophisticated technological garb are two people very much interested in getting to know this country and its inhabitants. Meeting people and sharing their experiences is an important aspect for both Victor and Roberts.

It’s an adventure that many people respond to with: “I wish I could do that.”

Victor appreciated having close friends in Marion and a good job that offered a lot of learning opportunities.

But now she feels ready to move on. And what better way to do it than on a bicycle, writing and traveling across country with one best friend and making lots of others.