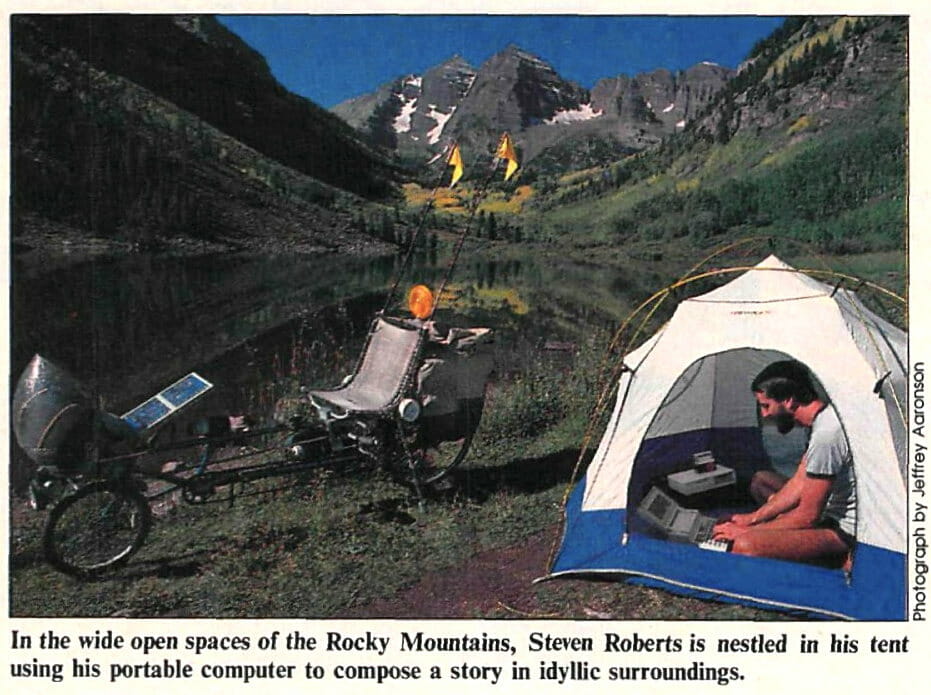 Personal computer users, a breed apart back then (despite that phrase sounding absurd today) were fascinated by the implications of this newfound technology. In 1984, it was still somewhat radical to think of working “at home” instead of “at the office,” so taking it to the next level and working on the road was newsworthy. There was a sort of meta-effect here; every journalist intuitively recognized at some point during the interview that we were in the same business, so far-away looks were not uncommon. The stories almost wrote themselves. “Man… you’re doing my job, but you’re living a dream…”

This wonderful image (by Jeffrey Aaronson of Aspen) was from the same photo session that yielded the Computing Across America book cover; it was taken at the Maroon Bells.

To many people, life on the road is a series of musty hotel rooms, bland meals, uncomfortable bar stools and 7 a.m. wake-up calls.

To writer Steven Roberts, however, life on the road is a barnstorming fantasy of freedom contrived with the aid of a bicycle, a backpack, a collapsible tent and a 8.5-pound portable computer.

Roberts, 31, has been pedaling around the country for the past year tapping out magazine articles and a biweekly newspaper column for USA Today on the keyboard of a Hewlett-Packard 110 “lap-size” portable computer. His objective is to compile material for a forthcoming book, Computing Across America, which is scheduled for publication sometime in 1985. With the dawn of each new day, he mounts his bicycle and departs for destinations unknown. He’s the boss of his own corporate galaxy with only the stars peering omnisciently over his shoulder.

“I’ve always had this fantasy of going off on a bicycle and doing all my work on a portable computer,” Roberts says. “This is an adventure. I’m out here for the fun of it and of course I’m using the technology to make it possible. There is no altruistic motive. No sponsor. Everyone is trying to hang motives on what I’ve been doing. But I’m just trying to have a good time and trying to write my book.”

His story is the prototypical tale of personal computing as parole from work-a-day drudgery. Roberts’ vantage point is an unusual one: from the low-slung saddle of a 180-pound “recumbent” bicycle that is more reminiscent of a souped-up Harley Davidson motorcycle than of a typical 10-speed touring cycle. He uses his computer to communicate with his office, in Columbus, Ohio, via CompuServe. He says that he hasn’t written a check or personally paid a bill in over a year. All those tedious details are performed by a secretary. Sounds like heaven. But it wasn’t always so.

Roberts says he’s been interested in electronics since age 8. In 1973 he opened a computer store in Louisville, Ken., while specializing in custom engineering. “I then realized that I ruined my hobby by turning it into a business,” he says.

He had a brief flirtation with engineering school but “I decided I could learn much more on my own. It was like going to art school and learning how to paint by numbers.”

It was clearly evident that radical action was needed. He moved to Columbus four years ago, landed a job, got sick of it and finally settled on the life of a freelance writer. To bankroll his avocation, Roberts wrote two books, The Complete Guide to Microsystem Management and Creative Design With Microcomputers (both published by Prentice-Hall).

“But I really got tired of this three-bedroom ranch in suburbia type of life,” Roberts says. “I needed to generate close to $3000 a month to break even. The pressure was getting pretty bad. I wanted to travel for a long time and I realized that if I waited until I was able to travel I’d be 65.”

Minus a “normal” schedule or daily calendar of appointments, Roberts must generate 24,000 words a month to keep to his publication schedule. His first draft is due at the publisher by March 1. In addition to his writing, Roberts finances his travels by serving as a marketing consultant for Atlantic-Richfield Company.

Motivation is a big problem,” Roberts says. “I don’t have any regular work schedule. More writing opportunities are always arising, the big problem is time and motivation, not the available material.”

Roberts’ coast-to-coast trek began more than a year ago with a 750-mile debugging loop from Columbus to Indianapolis to Louisville and back to Columbus. Then it was east to Washington, D.C., down the Atlantic coast to Florida, west through Texas to New Mexico and north into Colorado. Roberts plans to winter in San Francisco and concentrate on completing the first draft of the book.

The gist of his book has little to do with the varied applications he’s come in contact with on the road. “The book is not about the fact that I’m using a computer,” he says. “Most of the friendships I have are through CompuServe. Occasionally I run into people doing things with computers, but that’s not what this trip is about. I’m trying to get away from that image. I’m not out here searching for computer uses.”

“I’m really not finding classic home applications,” Roberts says. “Nobody does their checkbook or recipes on a computer. I’m just running into hobbyists on CompuServe—just folks with computers. The sweeping generalizations we’ve heard about computers simply don’t apply.”

For obvious reasons, Roberts is convinced that his high-tech bicycle odyssey wouldn’t be possible without a portable personal computer. “It’s pleasing to see that it [computing on the road] really works,” he says. “We have a history of blaming the environment for our failings. I thought that all I would need [to produce copy] is freedom—and surprise—it’s true. This is a step beyond the electronic cottage. I really have all I need to live anywhere. Some people don’t work well in an office—they feel chained to their desks. It can be the same at home, only you’re shackled to your own desk. Now it’s clear that with all of these new technologies that provide portable computing horsepower, data communication can be used to run a business on the road.”

No shackles. No time clock. No supervision. Simply computing in the wide open spaces across America. One hundred years ago it was called pioneering. Today it’s a totally plausible lifestyle, free from drudgery and stifling surroundings. Tomorrow… well, perhaps endeavors on a par with Roberts’ won’t be that unusual.